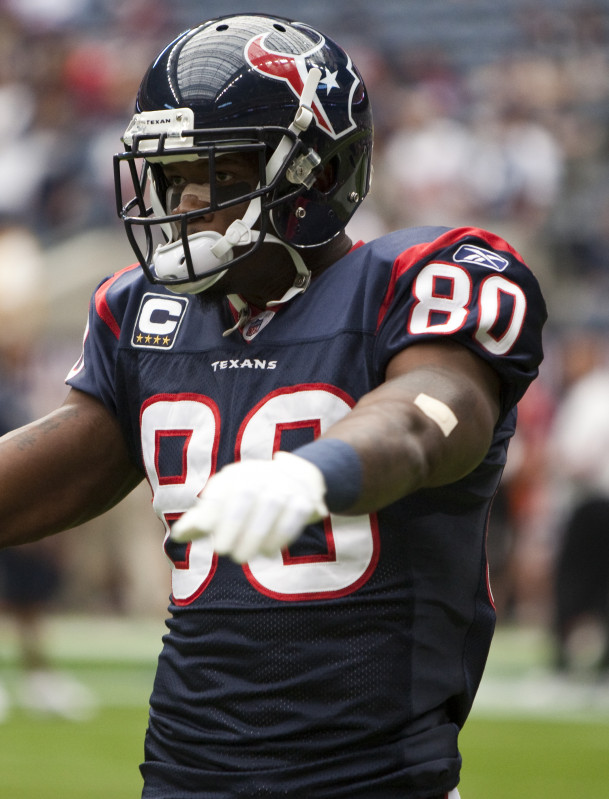 Andre Lamont Johnson (born July 11, 1981) is a former American football wide receiver who played most of his 14-year career with the Houston Texans of the National Football League (NFL). He played college football at Miami, and was drafted by the Texans third overall in the 2003 NFL Draft. He is 11th all-time in NFL career receptions, and in NFL receiving yards. Johnson holds nearly every Texans receiving record. He was also a member of the Indianapolis Colts and Tennessee Titans. During his career, Johnson was named to the Pro Bowl 7 times, named to 5 All-Pro teams and emerged as one of the NFL's most productive wide receivers of the 21st century.

Johnson attended Miami Senior High School, where he graduated in 1999. He played high school football and was rated as one of the top prospects in the country. As a senior, Johnson caught 32 passes for 931 yards and was named a Parade All-American.

On November 18, 2012, Johnson had the best game of his career in a Week 11 victory over the Jacksonville Jaguars. He had 14 receptions for 273 yards in that game, including the 48-yard game-winning touchdown in overtime. His receiving total was ninth-most in a game in NFL history and was the most for any receiver since Terrell Owens had 283 yards for the San Francisco 49ers in 2000. On November 22, Johnson had nine receptions for 188 yards in a Week 12 victory, again in overtime, over the Detroit Lions on Thanksgiving Thursday, crossing the 1,000 yards receiving mark for the sixth time in his career. Johnson set the NFL record for the highest receiving total in back-to-back games with 461 yards, beating the previous record of 450 yards set by Chad Johnson. Due to Johnson's efforts, he was named the AFC Offensive Player of the Month.

In 2003, Johnson's rookie season, he founded the Andre Johnson Foundation for children and teens growing up in single-parent homes. He has a daughter, Kylie, who was born in February 2010.

Johnson's breakout year came in 2004 when he combined with Texans quarterback David Carr to record 79 catches for 1,142 yards and six touchdowns. He was selected to his first Pro Bowl in recognition of his successful season.

In 2007, Johnson missed seven games due to injury. He returned mid-season to finish with 851 receiving yards and a career-high eight receiving touchdowns. He led the league in receiving yards per game in 2007 with 95.6.

On March 3, 2007, the Texans signed Johnson to a six-year extension; the deal was worth $60 million and includes $15 million in guarantees.

For his efforts in the month of October, Johnson earned AFC Offensive Player of the Month. he totaled 41 receptions for 593 receiving yards and two receiving touchdowns. On December 14, 2008, Johnson recorded his first 200-yard game with 207 yards and one touchdown in the Texans' 13–12 win over their AFC South rival Tennessee Titans. Johnson finished the 2008 season recording career highs in receptions and receiving yards totaling 115 receptions for 1,575 yards (both of which lead the league) and touchdown receptions with eight. This same season, Johnson became the first player in NFL history to record seven games with at least 10 receptions. He was named to the Pro Bowl and was a First Team All-Pro.

In 2009, Johnson once again led the league in receiving yards with 1,569 on 101 receptions and a career-high nine touchdowns to lead the Texans to a 9–7 record, the first winning record in franchise history. Johnson joined Jerry Rice as the only two receivers since the merger to lead the league in receiving yards in consecutive seasons. However, the Texans narrowly missed the playoffs on tiebreakers to the Baltimore Ravens and New York Jets, who also finished with a 9–7 record but had better conference records. Once again, Johnson was named to both the Pro Bowl and the First Team All-Pro.

On August 4, 2010, Johnson became the highest paid wide receiver in NFL history when he signed a two-year contract extension, keeping him under contract through the 2016 season.

In Week 2, against the Washington Redskins, he had 12 receptions for 158 yards and a touchdown to earn AFC Offensive Player of the Week. On November 28, 2010, against the Tennessee Titans, Johnson became the first player in NFL history to have 60 or more receptions in each of his first eight seasons. In the same game, he fought Tennessee Titans cornerback Cortland Finnegan. After being jammed hard off the line of scrimmage by Finnegan to the head and neck area repeatedly throughout the game, Johnson lost his temper and pulled off Finnegan's helmet. Finnegan then removed and threw Johnson's helmet down-field and was promptly thrown to the ground by his jersey. Johnson then proceeded to strike Finnegan on the back of his head and neck before being pulled away by the referee. Johnson and Finnegan were ejected from the game, but not suspended. Both were fined $25,000 for their unsportsmanlike actions. He was invited to the 2011 Pro Bowl, but the Texans finished 6–10 and missed the playoffs once again. He was ranked No. 7 his fellow players on the NFL Top 100 Players of 2011.

Johnson finished the 2012 NFL season second in receiving yards with a career-high 1,598 yards after Calvin Johnson and fourth in receptions with 112 receptions after Calvin Johnson, Brandon Marshall, and Wes Welker. Johnson had one of the best seasons of his career even though he played through a groin injury that limited his production during the first half of the season. Many analysts doubted he would not be able to return to top form after his injury in 2011 and his limited production during the first half of the season. Johnson had his third 1,500+ yard season in his career. He is tied with Marvin Harrison for the second-most 1,500+ yard seasons with 3, after Jerry Rice who has 4. Johnson was selected to play in the 2013 Pro Bowl, his sixth selection of his career. Johnson was voted onto the 2012 All-Pro Team's Second Team, his fifth All-Pro selection in his career. He was ranked 14th by his fellow players on the NFL Top 100 Players of 2013.

In the 2005 season, there was a slight decrease in Johnson's growth. He only played 13 games due to injury and had 63 receptions with 688 yards and two touchdowns as the Texans finished a franchise-worst 2–14. When interviewed in 2012, Johnson said that he was frustrated with the team's struggles, even saying that at times he "didn't want to get up and go to work", but knew that with a new franchise, struggles were expected and he wanted to be there to see the team make the next step.

On October 14, 2012, Johnson became the first Texan in franchise history to reach the 10,000 receiving yards milestone during a Sunday Night Football loss to the Green Bay Packers in 2012.

Johnson made his playoff debut against the Cincinnati Bengals on January 7, 2012. In the game, Johnson had five receptions for 90 yards, including a 40-yard touchdown catch. The Texans won 31–10 and advanced to the divisional round where they fell to the Baltimore Ravens 20–13. Johnson caught eight passes for 111 yards in the losing effort. He was ranked 15th by his fellow players on the NFL Top 100 Players of 2012.

On December 4, 2012, Johnson made headlines around the world when it was shared that he spent over $19,000 for kids aged 8–16 in Child Protective Services to have a shopping spree at Toys R' Us. Johnson's own foundation, the Andre Johnson Charitable Foundation, funded the spree. The shopping spree is an event that Johnson partakes in yearly; however, due to a photo of him holding up lengthy receipts, this was the first year the shopping spree generated worldwide attention. After the spree, Johnson also joined the Houston Police Department's Blue Santa program to surprise 800 students at Houston's Bastian Elementary School with Christmas presents.

In 2013, Johnson put together another solid season. He appeared in and started all 16 games for the Texans. He had 109 receptions for 1,407 yards and five touchdowns. He was named to his final Pro Bowl. He was ranked No. 21 by his fellow players on the NFL Top 100 Players of 2014.

Johnson was inducted into the Miami Sports Hall of Fame on April 10, 2014 at a ceremony in Miami.

On March 2, 2015, Johnson was informed that he would not be starting for the Texans for the 2015 season. He was given permission to seek a trade and if unsuccessful, he requested to be cut. After failing to find a team willing to trade for Johnson, the Texans released him on March 9, 2015. He played 12 of his 14 NFL seasons with the Texans.

On March 11, 2015, Johnson agreed to a three-year, $21 million contract with the Indianapolis Colts.

With the retirement of Reggie Wayne, 34-year-old Johnson began the 2015 season as the NFL's active leader in receiving yards, which he remained until passed by Steve Smith Sr. in Week 4 of 2016. The best game of Johnson's 2015 season came against his former team, the Houston Texans, where he caught six passes for 77 yards and two touchdowns. Johnson was released on March 9, 2016. In his only season with the Colts, Johnson made 41 receptions for 503 yards and four touchdowns.

On July 29, 2016, Johnson agreed to a two-year contract with the Tennessee Titans. In his lone season with the Titans and final season in the NFL, he appeared in only eight games and started four. He had nine receptions for 85 yards and two touchdowns. One of his touchdowns was a fourth down game-winner against the Detroit Lions in Week 2 from Marcus Mariota.

Johnson announced his retirement on October 31, 2016. On April 19, 2017, Johnson signed a one-day contract with the Texans so he could officially retire as a member of the team. During his farewell press conference he said his only regret was not bringing a championship to Houston and "even when I was with the Colts and the Titans, my heart never left this place." On November 19, 2017, Johnson was the first-ever inductee into the Texans Ring of Honor.