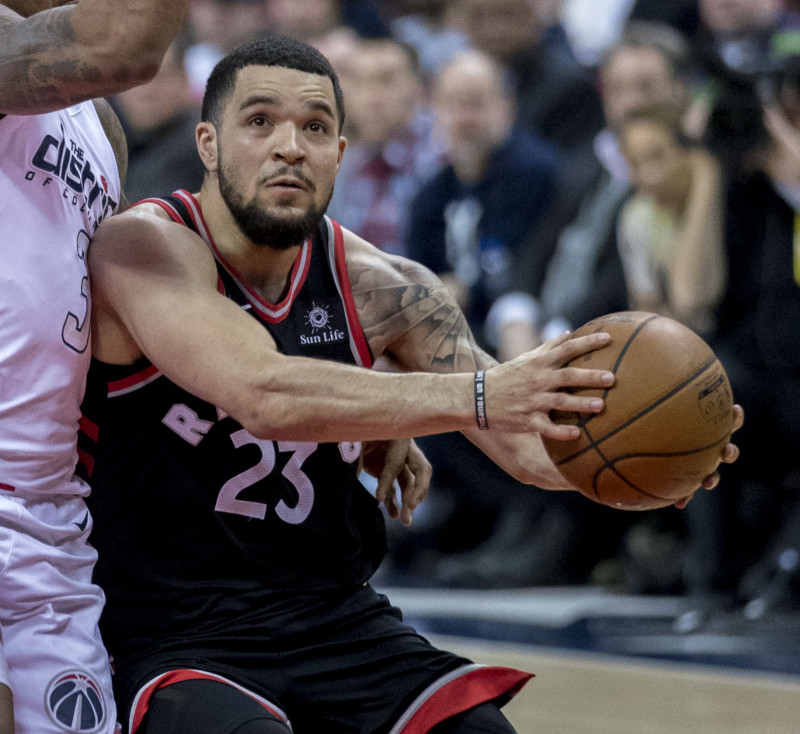 As a freshman, VanVleet contributed double digit scoring twice (versus Gonzaga and Ohio State) in the 2013 NCAA Men's Division I Basketball Tournament from off the bench as the 2012–13 Shockers team reached the final four. Against Gonzaga, his 13 points included a basket with 1:28 remaining that helped the Shockers secure only the fifth sweet sixteen appearance by a number 9 seed since the tournament went to 64 teams in 1985. His 12 points against Ohio State included a late basket that helped the Shockers become the fifth team with a seeding higher than eight to make it to the final four since 1979 when seeding began.

Fred VanVleet is the son of Fred Manning, who was shot dead in 1999. Manning had played basketball at Guilford High School in Rockford. VanVleet's mother is named Susan, and his stepfather is Joe Danforth. VanVleet is biracial; his father was black and his mother is white. He has a daughter who was born on January 29, 2018. On May 20, 2019, his son was born during the Raptors Eastern Conference Finals series against the Milwaukee Bucks. He also has a brother named Darnell.

VanVleet played for Auburn High School in Rockford, Illinois, where he was an All-State first team selection by the Chicago Sun-Times (Class 4A), Associated Press (Class 4A), and Chicago Tribune as a senior in 2012. In 2012, VanVleet helped lead Auburn to a 22-game winning streak which resulted in the school's first Illinois High School Association (IHSA) final four since 1975. He led the Knights to a 3rd-place finish in the IHSA state tournament.

VanVleet broke out as a sophomore, as expected. On January 23, 2014, he was selected to the 23-man Oscar Robertson Award midseason watchlist by the United States Basketball Writers Association. On February 17, Vanvleet was selected as one of 23 finalists for the Bob Cousy Award. When the Rockford native returned to the Chicago metropolitan area on February 19 to lead Wichita State against Loyola, he went 6-for-6 from the field and 10-for-10 on his free throw attempts for a game-high 22 points and added 8 rebounds and 6 assists to help Wichita State raise its record to 28–0. On February 28, he was named one of the 10 semi-finalists for the Naismith Award.

VanVleet made his official league debut on November 9, 2016, playing in only 26 seconds in a 112–102 win against the Oklahoma City Thunder. VanVleet posted his first two points in the Raptors' 19th game and his fourth appearance, which came against the Los Angeles Lakers on December 2. With Lowry sidelined for a night, VanVleet played with the second unit and posted career-highs with 25 minutes and 10 points on January 17 against the Brooklyn Nets. On February 3, VanVleet established a new career high with 15 points in a 102–94 loss to the Orlando Magic. During his rookie season, VanVleet had multiple assignments with Raptors 905 of the NBA Development League. He was a member of Raptors 905's championship-winning team in April 2017.

On November 25, 2017, VanVleet posted a career-high 16 points against the Indiana Pacers. Four days later, he had a career-high nine assists in a 126–113 win over the Charlotte Hornets. VanVleet posted new career-highs in points two times during January 2018: first on the 11th against the Cleveland Cavaliers with 22, then on the 28th against the Los Angeles Lakers with 25. On March 7, VanVleet made a long jump shot from the left corner with 1.1 seconds left to break a tie and clinch a 121–119 overtime win for the Raptors over the Pistons, as well as help Toronto to become the first team to clinch a berth in the 2018 NBA Playoffs. VanVleet finished the 2017–2018 season averaging 8.6 points, 3.2 assists, and 2.4 rebounds in 76 games; he ranked 4th in the NBA in net efficiency per possession behind Stephen Curry, Eric Gordon, and Chris Paul and was the only full-time bench player in the top 20 (19th) in the league for plus-minus. He was subsequently nominated for the NBA Sixth Man of the Year Award.

VanVleet re-signed with the Raptors on July 6, 2018. He scored a season-high 19 points on December 9, 2018, in a 104–99 loss to the Milwaukee Bucks. Two days later, he had a career-high 14 assists in a 123–99 win over the Los Angeles Clippers. While starting in place of Kyle Lowry on December 14, he scored 21 points against the Portland Trail Blazers. On December 19, he made a go-ahead three-point shot, with 25 seconds remaining, to cap a 17-point comeback against the Indiana Pacers. On January 5, he had a season high-tying 21 points in a 123–116 win over the Bucks. On February 7, he set a new career high with 30 points in a 119–101 win over the Atlanta Hawks. He was ruled out for approximately three weeks in early February with a partial ligament injury to his left thumb, an injury that occurred two nights earlier against the New York Knicks.

In the season-opener on October 22 against the New Orleans Pelicans, VanVleet scored a career high 34 points after receiving his first NBA championship ring. VanVleet scored 30 points on November 13 against the Portland Trail Blazers. On January 4, 2020, he posted 29 points, including 22 in the second half, and a season-high 11 assists, keying a 16-point comeback win over the Brooklyn Nets. In the Raptors’ second game returning from the suspension of the season due to the COVID-19 pandemic on August 3, VanVleet scored a career-high 36 points, hitting 7 three-pointers, in a 107–103 win over the Miami Heat in the Orlando bubble. On August 17, VanVleet set a trio of playoff career-highs in points (30), three-pointers made (8), and assists (11) in a 134–110 win over the Brooklyn Nets in Game 1 of the Eastern Conference quarter finals in the 2020 NBA Playoff Bubble. VanVleet became the first Raptors player to record 30 points & 10+ assists in a playoff game, while also joining Damian Lillard, Stephen Curry, and Chris Paul as the only NBA players to record 30+ points, 10+ assists, and 8+ three pointers in a playoff game.

In November 2020, it was announced that VanVleet would remain with the Raptors with a four-year, US$85-million deal.