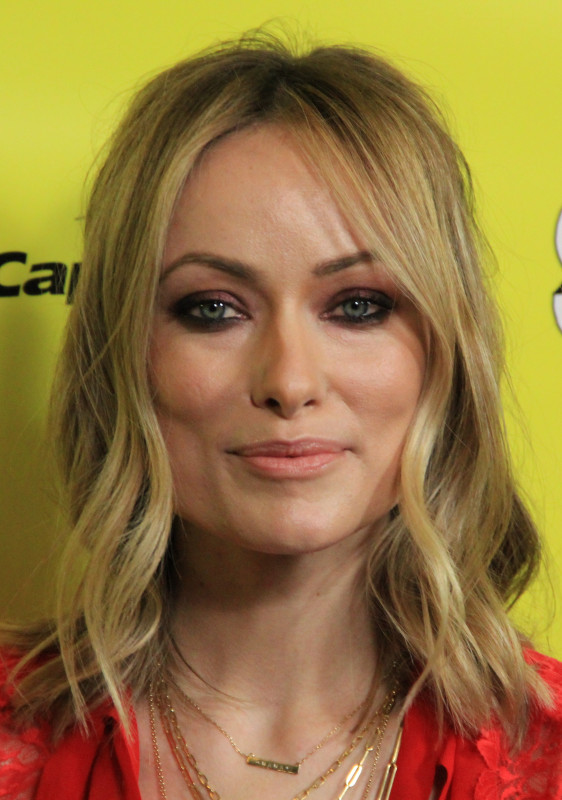 In 2017, Wilde made her Broadway debut portraying the role of Julia in 1984. It opened at the Hudson Theatre in New York City on June 22 (previews beginning May 18) for a limited run until October 8, 2017. In May 2017, Wilde became chief brand activist of True Botanicals, a cosmetics and skin care company. Her documentary short Fear Us Women (2017) follows Canadian civilian Hanna Bohman, who has spent the last three years in Syria as a volunteer soldier battling ISIS. As a member of the YPJ, an all-female Kurdish army, Hanna gives an inside look at the women fighting for liberation in Syria.

Olivia Wilde (born Olivia Jane Cockburn /ˈkoʊbərn/ KOH-bərn; March 10, 1984) is an American actress and filmmaker. She played Remy "Thirteen" Hadley on the medical-drama television series House (2007–2012), and has appeared in the films Tron: Legacy (2010), Cowboys & Aliens (2011), The Incredible Burt Wonderstone (2013), and The Lazarus Effect (2015). Wilde made her Broadway debut in 2017, playing Julia in 1984. In 2019, she directed her first film, the teen comedy Booksmart, for which she won the Independent Spirit Award for Best First Feature. Wilde's second feature, Don't Worry Darling, was released in 2022.

Wilde was born Olivia Jane Cockburn in New York City on March 10, 1984. She grew up in the Georgetown neighborhood of Washington, D.C. while spending summers at Ardmore in Ireland. She attended Georgetown Day School in Washington, D.C. and Phillips Academy in Andover, Massachusetts, graduating in 2002. Wilde derived her surname from Irish author Oscar Wilde, and started using it while in high school to honor the writers in her family, many of whom used pen names. She was accepted to Bard College, but deferred her enrollment three times in order to pursue acting. She then studied at the Gaiety School of Acting in Dublin.

Wilde next appeared in Richard Jewell in 2019, playing Atlanta Journal-Constitution reporter Kathy Scruggs who died in 2001. The film was criticised for depicting Scruggs as offering to trade sex with an FBI agent in return for confidential information. The editor-in-chief of The Atlanta-Journal Constitution wrote in an open letter that this depicted incident was "entirely false and malicious". Employees of the newspaper demanded the film have a prominent disclaimer that "some events were imagined for dramatic purposes and artistic license." The film was accused of perpetuating a sexist trope of women journalists exchanging sex for information. Wilde defended her role and stated that there was a sexist double standard, in that Jon Hamm's FBI agent character was not held to the same scrutiny. Commentators noted that Wilde's character was based on a real person, whereas the FBI agent was an amalgamation of multiple characters from the original script. They also stated that the purpose of the film was to expose and condemn the character assassination of Jewell; however, in the process, the film commits the same character assassination of Scruggs.

On June 7, 2003, when she was 19 years old, Wilde married Italian filmmaker and musician Tao Ruspoli, a member of the Ruspoli family. They were married in Washington, Virginia, on a school bus with only a pair of witnesses. She later said the wedding occurred in an abandoned school bus because it was the only place where they could be completely alone, as the marriage was a secret at the time. On February 8, 2011, she and Ruspoli announced that they were separating. Wilde filed for divorce in Los Angeles County Superior Court on March 3, 2011, citing "irreconcilable differences". The divorce was finalized on September 29, 2011. Wilde did not seek spousal support, and the pair reached a private agreement on property division.

In 2007, she starred off-Broadway in Beauty on the Vine, a political thriller, playing three different characters. She was also in The Death and Life of Bobby Z (2007) and the short-lived drama television series The Black Donnellys (2007). In September 2007, Wilde joined the cast of the medical drama television series House. She played the character of Remy "Thirteen" Hadley, a bisexual internist with Huntington's disease, who was handpicked by House out of a number of applicants to join his medical team. Her first appearance was in the episode "The Right Stuff".

In 2008, Wilde campaigned with actors Justin Long and her then-current House castmate Kal Penn in support for the Democratic Presidential nominee Barack Obama. Wilde was a supporter of the youth voter organization 18 in '08. She serves on their advisory council and appeared in a public service announcement that debuted June 30, 2008 which encouraged youth to vote at the 2008 election.

In August 2011, it was announced Wilde would be leaving House to further pursue her film career; she left a few months later, in the episode "Charity Case". Wilde starred in Cowboys & Aliens (2011) as Ella Swensen, who works with other characters to save the Earth from evil aliens, and also starred in the comedy The Change-Up (2011). She was also in the films In Time (2011), On the Inside (2011) and Butter (2011). In 2011, Wilde became a global brand ambassador for the cosmetic company Revlon, which featured her in their commercials. Wilde made her directing and screenwriting debut with the film Free Hugs (2011) for Glamour Magazine's short film series, which was screened at various festivals.

Wilde began dating American actor and comedian Jason Sudeikis in November 2011. They became engaged in January 2013. The couple have two children: a son, born in 2014, and a daughter, born in 2016. Sudeikis and Wilde's relationship ended in November 2020. Wilde was publicly served with court documents regarding child custody at Sudeikis' direction while Wilde was presenting Don't Worry Darling at CinemaCon 2022.

In May 2012, Wilde's character, Remy "Thirteen" Hadley, returned for the series finale of House for two episodes, "Holding On" and "Everybody Dies." She starred in the film People Like Us (2012), Third Person (2012), The Words (2012) and as Liza in Deadfall (2012), a thriller about two siblings who decide to fend for themselves in the wake of a botched casino heist, and their unlikely reunion during another family's Thanksgiving celebration. In 2012, Wilde was featured in PBS docu-series Half the Sky: Turning Oppression into Opportunity for Women Worldwide, which was inspired by Nicholas Kristof and Sheryl WuDunn's book of the same name. The docu-series follows Wilde as she learns of the struggles women face in Nairobi, Kenya. She also produced the short film, Baseball in the Time of Cholera (2012), which explored the cholera epidemic in Haiti.

In 2013, Wilde wrote an article called the, "Do's and Don'ts of Turning 30," which was published in Glamour Magazine. She starred in and executive produced Drinking Buddies (2013). She had a supporting role as Jane, a magician's assistant, in The Incredible Burt Wonderstone (2013). She also played Suzy Miller in the biographical drama Rush (2013), about James Hunt and Niki Lauda, and had a starring role in the film Her (2013), which was lauded by critics, and received accolades from the Academy Awards and Golden Globe Awards. She has served as executive producer for other documentary short films: The Rider and the Storm (2013), about Timmy Brennan, a New York ironworker from Breezy Point, Queens who lost everything he owned when Hurricane Sandy hit and Body Team 12 (2015), which follows the team tasked with collecting the dead at the height of the Ebola outbreak. The film went on to win Best Documentary Short at the 2015 Tribeca Film Festival, and was nominated for the Academy Award for Best Documentary (Short Subject) at the 88th Academy Awards.

Wilde considered herself a pescetarian in 2013, although she has been both vegan and vegetarian at different times. She was voted PETA's Sexiest Vegetarian Celebrity of 2010.

Wilde is widely known as a feminist. In 2013, she appeared in a video clip for Gucci's "Chime for Change" campaign that aims to raise awareness and funds of women's issues in terms of education, health, and justice. She participated in the 2017 Women's March in Washington, D.C. and the 2018 Women's March in Los Angeles. She is a supporter of Planned Parenthood and Time's Up. Wilde's mother, Leslie, was the Democratic nominee for Virginia's 5th congressional district in the 2018 U.S. midterm election. She lost to the Republican Denver Riggleman.

Wilde starred as Elizabeth Roberts, a trophy-wife customer who enters a strait-laced pharmacist's life and takes him on a joyride involving sex, drugs and possibly murder in Better Living Through Chemistry (2014). She starred as Beatrice Fairbanks in The Longest Week (2014), as the middle of a love triangle between an affluent drifter and his best friend. In 2015, she was the brand ambassador of H&M's Conscious Exclusive campaign. She starred in the thriller The Lazarus Effect (2015) as Zoe, a medical researcher who is accidentally killed, then revived with a miraculous serum with unfortunate side-effects. Wilde also starred in and produced the drama Meadowland (2015), that premiered at the Tribeca Film Festival in New York on April 17, 2015. She played Eleanor in Love the Coopers (2015).

On June 30, 2015, she introduced Democratic Presidential candidate Hillary Clinton at a campaign event in New York City. Wilde starred in a PSA released on March 21, 2016, for World Down Syndrome Day, alongside 19-year-old AnnaRose from New Jersey who has Down Syndrome.

In 2016, Wilde directed a music video for Edward Sharpe and the Magnetic Zeros, teaming up with director of photography Reed Morano. She then worked with American rock band Red Hot Chili Peppers, directing the music video for their song "Dark Necessities". Wilde starred as Devon Finestra in HBO's rock 'n' roll drama television series Vinyl (2016). Also in 2016, Wilde also directed an acclaimed live table reading of Hannah and Her Sisters at The New York Times's Center Theatre. The cast included Wilde as Hannah. Wilde stated that Hannah and Her Sisters is "just a perfect script, and I knew an audience would enjoy having the chance to focus on the genius of the writing, which is what the Live Reads allow for". Her brand ambassador partnership with Revlon ended in 2016.

In 2018, Wilde appeared in A Vigilante. Its world premiere was at South by Southwest on March 10, 2018. It was released March 29, 2019. The same year, Wilde starred in the drama Life Itself. The film was released on September 21, 2018, received negative reviews from critics, and performed poorly at the box office.

Wilde made her directing debut with the teen comedy Booksmart, which was released on May 24, 2019. As of June 27, 2019, it was rated 97% "fresh" on Rotten Tomatoes, from 271 critics' reviews. The Washington Post stated, "[as the film progresses,] Wilde's filmmaking skills become more and more evident, bursting forth in a third act that builds into something beautiful and even transcendent." The Los Angeles Times wrote that it "leaves you feeling unaccountably hopeful for the state of humanity – and the state of American screen comedy too", and The Wall Street Journal noted, "Nothing funnier, smarter, quicker or more joyous has graced the big screen in a long time." The film won the Independent Spirit Award for Best First Feature at the 35th Independent Spirit Awards on February 8, 2020.

In January 2021, Wilde began dating Harry Styles after meeting during the filming of Don't Worry Darling.