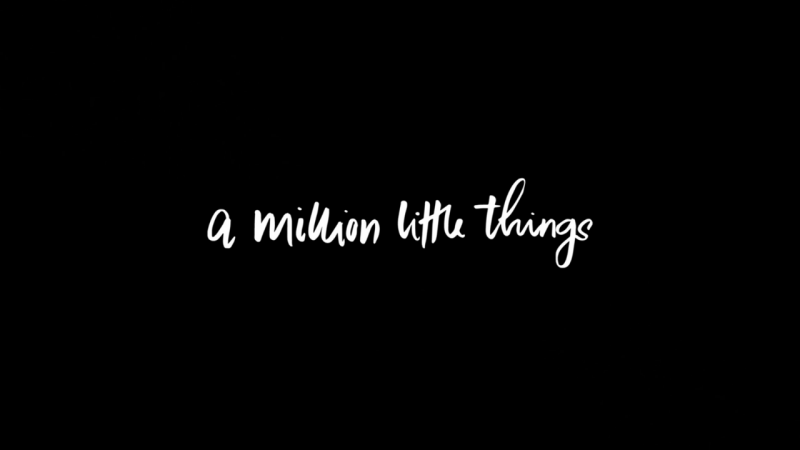 A Million Little Things is an American family drama television series created by DJ Nash for ABC. Produced by ABC Signature and Kapital Entertainment, it features an ensemble cast including David Giuntoli, Romany Malco, Allison Miller, Christina Moses, Christina Ochoa, Grace Park, James Roday Rodriguez, Stéphanie Szostak, Tristan Byon and Lizzy Greene. The show received a put pilot commitment at ABC in August 2017; A Million Little Things was ordered to series in May 2018 and premiered on September 26, 2018. In October 2018, the show was picked for a full season of 17 episodes. In February 2019, ABC renewed the series for a second season which premiered on September 26, 2019, and in May 2020, the show was renewed for a third season that premiered on November 19, 2020. ABC renewed the series for a fourth season in May 2021.

On August 18, 2017, ABC landed a series titled A Million Little Things with a put pilot commitment, to be written by DJ Nash, who would serve as executive producer alongside Aaron Kaplan and Dana Honor. The series was described as "being in the tone of The Big Chill," with the title stemming from the popular adage, "Friendship isn't a big thing – it's a million little things." Nash came up with the idea for the series following his single-camera comedy pilot Losing It. He said that "Sometimes in comedy, you have to apologize for adding drama, which is why I was so thrilled to see ABC's passion for a drama that has comedy". ABC officially ordered the series to pilot in January 2018, and the show was officially picked up to series on May 9, 2018. The series is produced by ABC Studios and Kapital Entertainment. On February 5, 2019, during the TCA press tour, A Million Little Things was renewed for a second season. On August 8, 2019, it was announced that ABC had ordered a full season for the second season. On May 21, 2020, ABC renewed the series for a third season which premiered on November 19, 2020. At the PaleyFest New York panel, Nash announced that the COVID-19 pandemic and the Black Lives Matter movement will be part of the storylines for the third season. On May 14, 2021, ABC renewed the series for a fourth season which will consists of 20 episodes.

On February 6, 2018, David Giuntoli was cast as Eddie. A week later, Romany Malco was cast as Rome. By the end of the month, Christina Ochoa had joined the cast as Ashley, along with Anne Son as Katherine, Christina Moses as Regina Howard, and James Roday Rodriguez as Gary. In early March 2018, Stéphanie Szostak was cast as Delilah, while Lizzy Greene was cast as Sophie Dixon. That month, it was also revealed that Ron Livingston had joined the series in an unspecified role, which was revealed with the series order in May to be the character Jon. On June 27, 2018, Grace Park was cast as Katherine, replacing Anne Son who was in the original pilot.

The soundtrack for the first season was released digitally on March 1, 2019, by Hollywood Records.