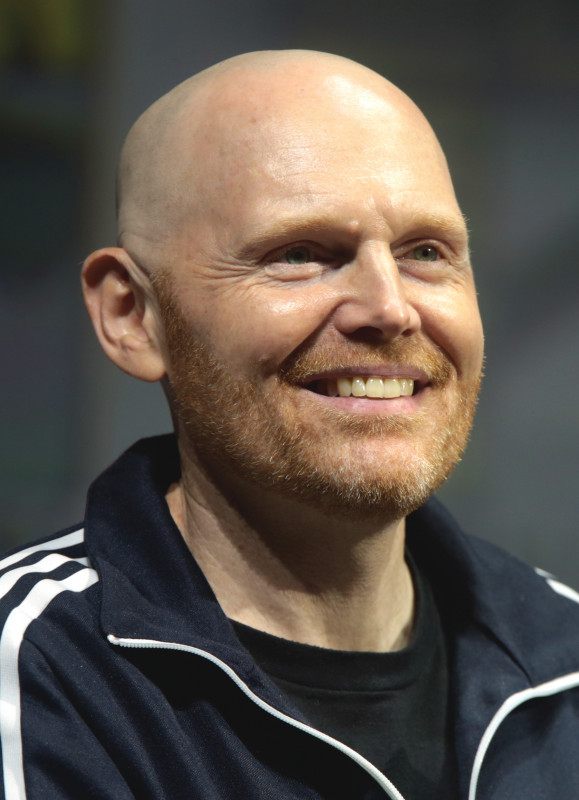 William Frederick Burr was born on June 10, 1968, in Canton, Massachusetts, the son of nurse Linda Ann (née Wigent) and dentist Robert Edmund Burr. He is of German and Irish descent. He graduated from high school in 1987. In 1993, he obtained a bachelor's degree in radio from Emerson College in Boston, Massachusetts. He worked in warehouses before starting his comedy career, later stating that he enjoyed the freedom of the job: "If my boss gave me a rough time, I could just get on a forklift and just, like, drive away."

William Frederick Burr (born June 10, 1968) is an American stand-up comedian, actor, and podcaster. Outside of stand-up, he is known for playing Patrick Kuby in the AMC crime drama series Breaking Bad (2008–2013), creating and starring in the Netflix animated sitcom F Is for Family (2015–present), co-founding the All Things Comedy network, and portraying Mayfeld on the Star Wars series The Mandalorian. He has hosted the bi-weekly comedy podcast, titled The Monday Morning Podcast since May 2007.

Burr's comedy career began in 1992. He moved to New York City in 1994. Since May 2007, Burr has recorded a weekly one-hour podcast, Bill Burr's Monday Morning Podcast, in which he speaks about his experiences, current events, going on tour, and sports, and offers advice to questions submitted by the listeners. The podcast is available on Burr's website and on the All Things Comedy network. He is sometimes joined by his wife, Nia, and has featured guests and interviews with other comedians.

Bill Burr's first hour-long special, Why Do I Do This?, took place in New York in 2008. Burr's special Let it Go was recorded at The Fillmore in San Francisco and premiered on Comedy Central on September 18, 2010. A later special, You People Are All The Same, premiered in 2012 as a Netflix exclusive. In 2014, Burr filmed his fourth hour-long special I'm Sorry You Feel That Way at the Tabernacle Theater in Atlanta, Georgia. The film was shot in black and white, which is rare for modern comedy specials. He was a regular on Chappelle's Show.

In 2008, Burr's voice was featured in the game Grand Theft Auto IV as Jason Michaels of the biker gang The Lost MC in the mission "No Love Lost". In 2009, he reprised his role in the game's expansion pack The Lost and Damned.

Burr also appears as a guest on radio shows and other comedians' podcasts, such as Opie and Anthony, You Made It Weird with Pete Holmes, The Adam Carolla Show, The Joe Rogan Experience, WTF with Marc Maron, The Nerdist Podcast, The Adam Buxton Podcast, and Nobody Likes Onions. Burr was also the first guest on Tom Green's podcast. On April 18, 2011, he guest hosted the Hollywood Babble-On podcast alongside Ralph Garman.

Burr married actress and producer Nia Hill in 2013. Their daughter, Lola, was born on January 20, 2017. They reside in Los Angeles. Hill sometimes appears as a guest on Burr's podcast.

Rolling Stone magazine called Burr "the undisputed heavyweight champ of rage-fueled humor". Burr often portrays himself as "that loud guy in the bar" with "uninformed logic". In an interview with The Boston Globe, Burr stated, "I'm the 'dude, bro' guy." According to Montreal Gazette, Burr is "a cynic and a contrarian who has never paid any heed to political correctness". The New York Times in 2013 called Burr "one of the funniest, most distinctive voices in the country for years".

He stars in F Is for Family, which premiered on Netflix on December 18, 2015. The show, an animated sitcom, draws on Burr's stand-up and the "absurdity of political correctness". On April 17, 2016, Netflix approved the show for a second season. Burr writes and executive produces the series along with Michael Price. Burr's fifth hour-long special, Bill Burr: Walk Your Way Out, debuted on Netflix on January 31, 2017. He appeared in the third episode (titled "Bill Burr") of the second season of the HBO series Crashing.

Burr's sixth hour-long special, Bill Burr: Paper Tiger, debuted on Netflix on September 10, 2019. In December 2019, he portrayed the character Mayfeld in the sixth episode of the Disney+ series The Mandalorian.