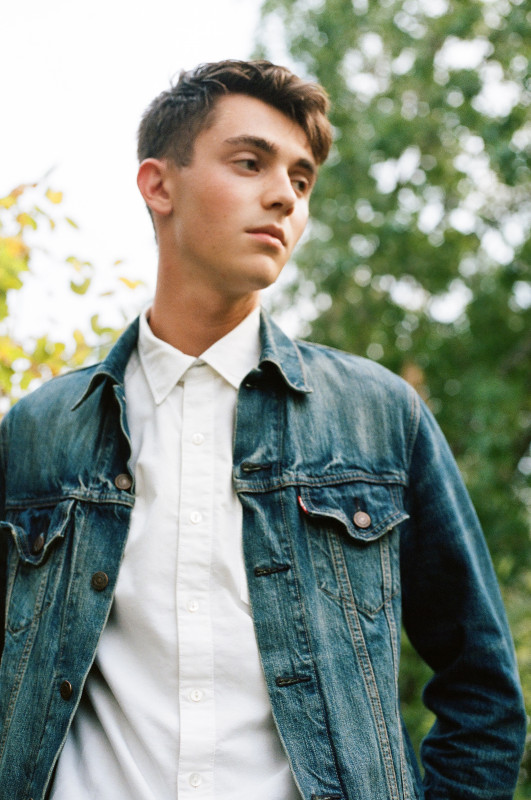 Chance was born August 16, 1997, in Wichita Falls, Texas, and grew up as a Catholic in Edmond, Oklahoma. The youngest child of Scott and Lisa Chance, he has an older sister, Alexa, and an older brother, Tanner, both of whom also make music. Chance began playing the piano at age eight and had several years of piano lessons before he first went viral.

Greyson Michael Chance (born August 16, 1997) is an American singer-songwriter and musician. He rose to national attention in 2010 with his performance of Lady Gaga's "Paparazzi" at a grade school music festival which went viral on YouTube, gaining over 71 million views. Two of his original compositions, "Stars" and "Broken Hearts", gained over six and eight million views respectively on his channel. Chance's debut single, "Waiting Outside the Lines", was released in October 2010 followed by his debut studio album, Hold On 'til the Night, in August 2011.

Chance's cover of Lady Gaga's "Paparazzi" was posted to YouTube on April 28, 2010, and for almost two weeks, the video generated low views. At least two social websites, GossipBoy.ca and reddit.com, posted video embeds on May 10, 2010. The next morning, it was embedded on ryanseacrest.com, which reported finding the video via BuzzFeed, a website that attempts to track and predict emerging viral internet memes. Later in the day, TVGuide, The Huffington Post, and Yahoo! Music's video blog, Video Ga Ga, also posted articles embedding the video; TVGuide mentioned that a Facebook fan page had already been started for Chance. That afternoon, Ryan Seacrest and Ellen DeGeneres linked the video on their Twitter accounts, as did celebrity Ashton Kutcher later that evening.

Because of his quick rise, including fast creations of fan sites, and high quality of the videos, The Christian Science Monitor examined the story to see if it was genuine or a clever marketing campaign, ultimately stating the "video is legit." In May 2010, ITN News raised many of the same questions; highlighting aspects of Chance's "Paparazzi" video, media industry analyst Alan Stevens pointed out the growing inability within modern media culture to distinguish between videos which are produced by amateurs and videos which are produced by professionals but made to appear amateur in origin.

On May 15, Chance created an official Myspace page and an official Twitter account. Chance made a second appearance on Ellen, airing May 26, 2010, on which he performed his original song "Broken Hearts", received a $10,000 award for winning Ellen's Wonderful Web of Wonderment contest, a brand new Yamaha piano, and was announced as DeGeneres's first signed artist to her new recording label eleveneleven. While explaining her reasons for naming her record label, she listed as one reason the fact that she first saw Chance's "Paparazzi" cover on May 11, 2010. Also, she states that 11 is Greyson's soccer jersey number. Guy Oseary, who manages Madonna's career, and Troy Carter, who manages Lady Gaga's career, would be co-managers of Greyson Chance's career, but no partnership with a major recording label had been finalized.

His debut single, "Waiting Outside the Lines", was released to iTunes on October 26, 2010. It was released digitally in the UK on December 9. The single also contained a remix featuring Filipino singer Jake Zyrus (then Charice), as well as studio versions of his covers of Lady Gaga's "Paparazzi" and "Fire" by Augustana. Throughout December, Chance appeared at We Day 2010 in downtown Toronto at the Air Canada Centre, where he performed the latter, and visited both Paris and London, appearing on local radio stations and giving private concerts in both cities. On February 5, 2011, Greyson Chance entered the National spotlight again with an appearance/performance of "Waiting Outside the Lines" on CBS's Early Show, while stopping through New York on Miranda Cosgrove's Dancing Crazy Tour. He then started the Waiting 4U tour with Australian pop/R&B singer Cody Simpson on April 9 in Ivins, Utah. The tour ended on May 18, 2011, in Portland, Oregon.

On May 17, 2011, his second single, "Unfriend You", was released to iTunes and, on May 23, Greyson visited The Ellen DeGeneres Show to premiere the single. After the performance, Greyson revealed a solid release date for his upcoming debut album, Hold On 'Til the Night, which was released on August 2, 2011. The music video features an appearance by Ariana Grande.

On September 15, he again appeared on The Ellen DeGeneres Show to talk about his album, and also revealed that he had taken his first steps into acting, portraying a younger version of Jimmy Chance, the protagonist of Fox's comedy Raising Hope, in the series' second-season premiere. The episode aired on September 20, 2011.

In November 2011, Chance undertook a tour of Southeast Asia to promote his album, which had just been released in the region. The tour started in Kuala Lumpur, Malaysia, where in addition to a showcase performance he was invited to perform at the Malaysian Music Industry Awards show (the first foreign artist so invited since 1999) with Malaysia YouTube sensation, Najwa Latif, Greyson also gave performances in Singapore; Kota Kinabalu (Borneo, Malaysia); Manila, Philippines; and Jakarta, Indonesia.

In March 2012, Chance returned to Asia to support the release of a special edition of the album, which was released to the Asian market on March 20. He was accompanied by his full four-part band and gave full concert performances in Kuala Lumpur, Singapore, Jakarta, and Manila, before going on without the band on a promotional tour to Taiwan, Hong Kong, and Bangkok, Thailand. In early July, he was back in the region for promotional and TV appearances in Hong Kong and Changsha (Hunan, China). In August, he performed at the MTV-CCTV Mandarin Music Awards show in Beijing and won the award for Most Popular New International Artist of the Year.

In November 2012, after releasing his new EP, Truth Be Told Part 1, he again returned to Asia for a promo tour starting in Kota Kinabalu (Borneo, Malaysia) to Kuala Lumpur, Malaysia, Singapore and Manila, Philippines.

On January 13, 2014, Chance released a new song named "Temptation" onto his SoundCloud. He performed the song at the Sundance Film Festival. [2] Throughout the year, he continued the process of writing and recording his EP, Somewhere Over My Head. On September 16, Chance released a single called "Thrilla In Manila". Another track named "Meridians" was released on March 24, 2015. Both songs, ultimately, did not appear on the final track list. The official lead single, "Afterlife", was released on October 29, 2015. In 2016, it was succeeded by "Hit & Run" on February 5 and "Back On the Wall" on April 29 as the second and third singles, respectively. On April 28, he released a new music video for his single "Back On The Wall" on his YouTube channel. The EP was released May 13, 2016.

Before the release of Somewhere Over My Head, from January 27 to February 1, 2016, Chance performed three shows in Los Angeles, Chicago and New York City. He had a release party of his new EP in YouTube Space LA on May 13, 2016. And on May 28–29, he had another two shows after the release of the EP in San Francisco and Seattle.

In February 2016, he was picked as Elvis Duran's Artist of the Month and was featured on NBC's Today show hosted by Kathie Lee Gifford and Hoda Kotb and broadcast nationally where he performed live his single "Hit & Run".

During promotion of the EP, Chance was also featured on an electronic dance track by tyDi and Jack Novak titled "Oceans", which was released on February 19, 2016.

In June 2016, one month after releasing his new EP, Somewhere Over My Head, Chance returned to Asia for a short promo tour starting in Singapore, Kuala Lumpur and Penang in Malaysia, and Manila, Philippines.

In 2017, Chance was attending the University of Tulsa and majoring in history, but he later dropped out to focus on music. On July 19, 2017, Chance came out as gay in an Instagram post. On August 14, 2020, Chance revealed he struggles with anorexia nervosa.

On March 15, 2019, he released his second studio album, Portraits. Due to his success independently, Chance signed his second major record deal with Sony Music Global and Arista Records, which will release any subsequent material he produces, in June 2019. In the same month he also announced a world tour promoting Portraits.

On January 15, 2021, Chance released "Holy Feeling", the lead single from his upcoming extended play. The second single, "Hellboy", was released on April 23. Chance announced on April 29 that his third extended play, Trophies, would be released on June 25, 2021. In May, he announced he would be embarking on the Trophies World Tour, visiting various cities in North America and Europe over 2021 and 2022.

In March 2022 it was announced that Chance will make a feature film debut starring in Maybelline Prince.

The third studio album, Palladium, was released on September 22, 2022.