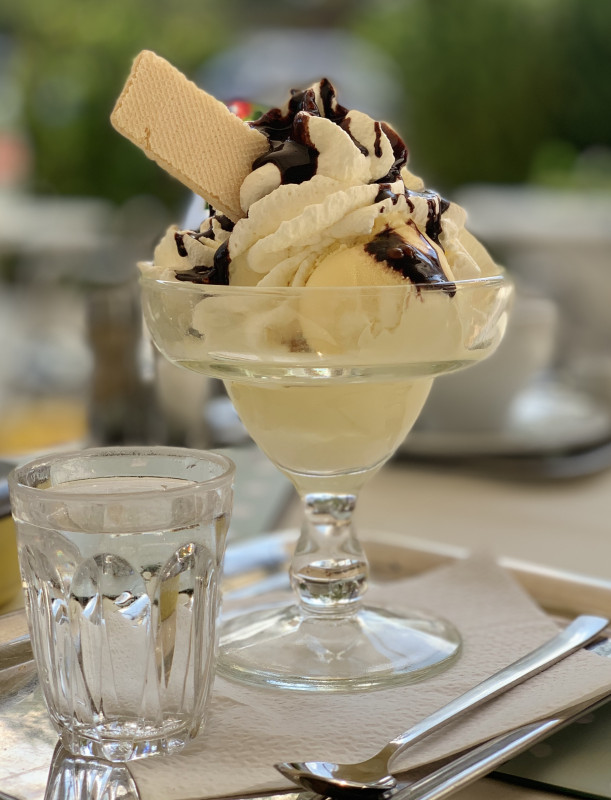 Its spread throughout Europe is sometimes attributed to Arab traders, but more often to Marco Polo. Though it's not mentioned in any of his writings, Polo is often credited with introducing sorbet-style desserts to Italy after learning of it during his travels to China. The Italian duchess Catherine de' Medici is said to have introduced flavored sorbet ices to France when she brought some Italian chefs with her to France upon marrying the Duke of Orléans (Henry II of France) in 1533. One hundred years later, Charles I of England was reportedly so impressed by the "frozen snow" that he offered his own ice cream maker a lifetime pension in return for keeping the formula secret, so that ice cream could be a royal prerogative. There is no evidence to support any of these legends.

In 1651, Italian Francesco dei Coltelli opened an ice cream café in Paris, and the product became so popular that during the next 50 years another 250 cafés opened in Paris.

Ice cream recipes first appeared in England in the 18th century. The recipe for ice cream was published in Mrs. Mary Eales's Receipts in London in 1718.

Quaker colonists introduced ice cream to the United States, bringing their ice cream recipes with them. Confectioners sold ice cream at their shops in New York and other cities during the colonial era. Ben Franklin, George Washington, and Thomas Jefferson were known to have regularly eaten and served ice cream. Records, kept by a merchant from Catham street, New York, show George Washington spending approximately $200 on ice cream in the summer of 1790. The same records show president Thomas Jefferson having an 18-step recipe for ice cream. First Lady Dolley Madison, wife of U.S. President James Madison, served ice cream at her husband's Inaugural Ball in 1813.

The hand-cranked churn, which also uses ice and salt for cooling, replaced the pot-freezer method. The exact origin of the hand-cranked freezer is unknown, but the first U.S. patent for one was #3254 issued to Nancy Johnson on 9 September 1843. The hand-cranked churn produced smoother ice cream than the pot freezer and did it quicker. Many inventors patented improvements on Johnson's design.

In Europe and early America, ice cream was made and sold by small businesses, mostly confectioners and caterers. Jacob Fussell of Baltimore, Maryland was the first to manufacture ice cream on a large scale. Fussell bought fresh dairy products from farmers in York County, Pennsylvania, and sold them in Baltimore. An unstable demand for his dairy products often left him with a surplus of cream, which he made into ice cream. He built his first ice cream factory in Seven Valleys, Pennsylvania, in 1851. Two years later, he moved his factory to Baltimore. Later, he opened factories in several other cities and taught the business to others, who operated their own plants. Mass production reduced the cost of ice cream and added to its popularity.

In the Mediterranean, ice cream appears to have been accessible to ordinary people by the mid-eighteenth century. Ice cream became popular and inexpensive in England in the mid-nineteenth century, when Swiss émigré Carlo Gatti set up the first stand outside Charing Cross station in 1851. He sold scoops in shells for one penny. Prior to this, ice cream was an expensive treat confined to those with access to an ice house. Gatti built an 'ice well' to store ice that he cut from Regent's Canal under a contract with the Regent's Canal Company. By 1860, he expanded the business and began importing ice on a large scale from Norway.

Ice cream soda was invented in the 1870s, adding to ice cream's popularity. The invention of this cold treat is attributed to American Robert Green in 1874, although there is no conclusive evidence to prove his claim. The ice cream sundae originated in the late 19th century. Several men claimed to have created the first sundae, but there is no conclusive evidence to support any of their stories. Some sources say that the sundae was invented to circumvent blue laws, which forbade serving sodas on Sunday. Towns claiming to be the birthplace of the sundae include Buffalo, Two Rivers, Ithaca, and Evanston. Both the ice cream cone and banana split became popular in the early 20th century.

Mrs A.B.Marshall's Cookery Book, published in 1888, endorsed serving ice cream in cones, but the idea predated that. Agnes Marshall was a celebrated cookery writer of her day and helped to popularize ice cream. She patented and manufactured an ice cream maker and was the first person to suggest using liquefied gases to freeze ice cream after seeing a demonstration at the Royal Institution.

Reliable evidence proves that ice cream cones were served in the 19th century, and their popularity increased greatly during the St. Louis World's Fair in 1904. According to legend, an ice cream vendor at the fair ran out of cardboard dishes. The vendor at the Syrian waffle booth next door, unsuccessful in the intense heat, offered to make cones by rolling up his waffles. The new product sold well and was widely copied by other vendors.

The development of industrial refrigeration by German engineer Carl von Linde during the 1870s eliminated the need to cut and store natural ice, and, when the continuous-process freezer was perfected in 1926, commercial mass production of ice cream and the birth of the modern ice cream industry was underway.

In 2006, some commercial ice cream makers began to use liquid nitrogen in the primary freezing of ice cream, thus eliminating the need for a conventional ice cream freezer. The preparation results in a column of white condensed water vapour cloud. The ice cream, dangerous to eat while still "steaming" with liquid nitrogen, is allowed to rest until the liquid nitrogen is completely vaporized. Sometimes ice cream is frozen to the sides of the container, and must be allowed to thaw. Good results can also be achieved with the more readily available dry ice, and authors such as Heston Blumenthal have published recipes to produce ice cream and sorbet using a simple blender.

In the United Kingdom, 14 million adults buy ice cream as a treat, in a market worth £1.3 billion (according to a report produced in September 2009).

From the perspective of food chemistry, ice cream is a colloid or foam. The dietary emulsifier plays an important role in ice cream. Soy lecithin and polysorbate are two popular emulsifiers used for ice cream production. A mouse study in 2015 shows that two commonly used dietary emulsifiers carboxymethylcellulose (CMC) and polysorbate 80 (P80) can potentially cause inflammatory bowel diseases, weight gain, and other metabolic syndromes.

Ice cream can be mass-produced and thus is widely available in developed parts of the world. Ice cream can be purchased in large cartons (vats and squrounds) from supermarkets and grocery stores, in smaller quantities from ice cream shops, convenience stores, and milk bars, and in individual servings from small carts or vans at public events. In 2015, the US produced nearly 900 million gallons of ice cream.