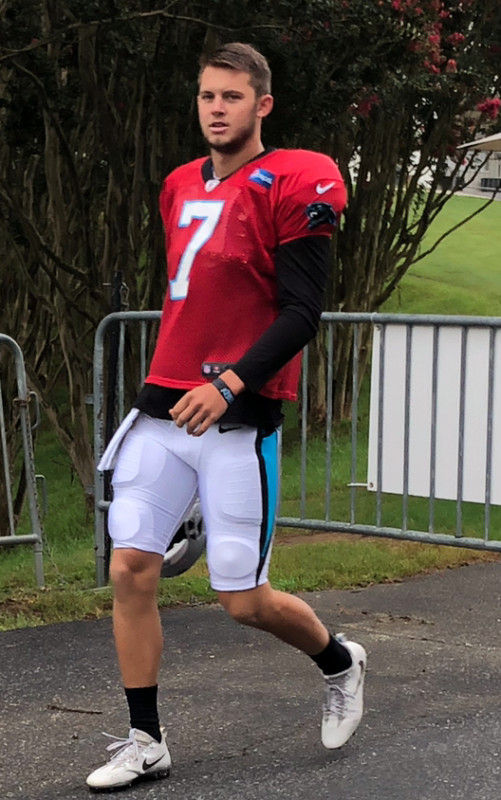 Kyle Allen (born March 8, 1996) is an American football quarterback for the Washington Redskins of the National Football League (NFL). He played college football for the Texas A&M Aggies and Houston Cougars. He was signed as an undrafted free agent by the Carolina Panthers in 2018. During his rookie season, Allen started the final game of the season following injuries to both Cam Newton and Taylor Heinicke. Allen then started for the majority of the 2019 season after Newton had another early-season injury. He was traded to the Redskins in 2020.

Allen attended Desert Mountain High School in Scottsdale, Arizona. During his high school career, he passed for over 8,000 yards and had 86 passing touchdowns. Allen was a five-star recruit by Rivals.com and was ranked as the best pro-style quarterback and seventh best player overall in his class. In June 2013, he committed to Texas A&M University to play college football. Allen was highly recruited out of high school; in addition to Texas A&M, he received offers from Alabama, Arizona, Arizona State, Boise State, California, Colorado State, Duke, North Carolina, Notre Dame, Ohio State, Oklahoma State, Ole Miss, Tennessee, UCLA, West Virginia, and Wisconsin. Allen played for the West team in the 2014 U.S. Army All-American Bowl. He completed 12 of 18 passes, and set an Army Bowl record with 183 passing yards.

On September 14, 2014, he made his first appearance with the Aggies and threw 12/16 completions for 122-yards, 2 touchdowns, and an interception. The next week he took on #3 Auburn in Auburn, Alabama. He led the unranked Aggies past the Tigers while throwing for 277 yards and 4 touchdowns along with 1 interception in a 41–38 win, ending Auburn's chances of making the playoffs and putting A&M back in the Top 25.

Following the transfer of Kenny Hill to Texas Christian University, Allen was positioned to be the starter for the Aggies in 2015. On August 24 during the 2015 off-season, Allen was named the starting quarterback against Arizona State with competition from incoming freshman Kyler Murray.

Against Alabama, Allen said he suffered an AC sprain in his throwing shoulder but told the coaching staff he was well enough to face Ole Miss. Allen would then miss playing in the 35–28 win on Oct 31 against South Carolina and the Aggies loss to Auburn (26–10). Kyler Murray would start in both of those games and a home win over Western Carolina. Allen would return as the starter on Nov 21, a 25–0 win over Vanderbilt. He played his last game with the Aggies on November 28, 2015, completing 15/28 passes for 161-yards and a touchdown in a 7–19 loss to LSU. He finished his second year with completing 160/283 passes for 2,210-yards, 17 touchdowns, and 7 interceptions. Allen also ran for 65 yards and 2 touchdowns.

On December 10, 2015, Allen announced he would be transferring from Texas A&M and then over two weeks later, the Aggies' other quarterback, Kyler Murray, announced he would be transferring. This decision made him unavailable to play in the Aggies' Music City bowl game. Allen ended his Aggies career with 278 completions in 475 attempts (58.5%), 3,532 passing yards, 33 passing touchdowns, and 14 interceptions in 20 games.

Allen announced on January 5, 2016, that he intended to transfer to the University of Houston. Allen began classes at Houston on January 19, but was not eligible to play for the Cougars during the 2016 season due to NCAA transfer guidelines that require transfers to sit out an entire year.

Allen began the 2017 season as the starting quarterback for the Houston Cougars. His first game was a 19–16 victory by the Cougars over the Arizona Wildcats on September 9, 2017.

Allen then was benched in favor of Kyle Postma during Houston's third game against Texas Tech after throwing four interceptions in three games. On January 11, 2018, Allen announced his decision to forgo his final year of eligibility and declare for the 2018 NFL Draft.

On April 28, 2018, Allen signed with the Carolina Panthers as an undrafted free agent. He was waived on September 1, 2018 and was signed to the Panthers practice squad the next day. He was released on September 10, 2018. He was re-signed to the Panthers practice squad on October 30, 2018. On December 20, 2018, Allen was promoted to the active roster to back up Taylor Heinicke after starter Cam Newton was shut down for the season. On December 23, 2018, he made his NFL debut against the Atlanta Falcons in relief for an injured Heinicke going 4-of-4 with 38 yards in his two drives before Heinicke came back into the game at the two minute warning of the first half. Allen would go on to make his first NFL start in the last game of the season against the New Orleans Saints. He went 16-of-27 with 228 passing yards, with two passing touchdowns and one rushing touchdown. He suffered an injury early in the fourth quarter and was relieved by Garrett Gilbert.

On March 24, 2020, Allen was traded to the Washington Redskins for a fifth round pick in the 2020 NFL Draft. The trade reunited Allen with former Panthers head coach Ron Rivera, who became the Redskins' new head coach on January 1, 2020.