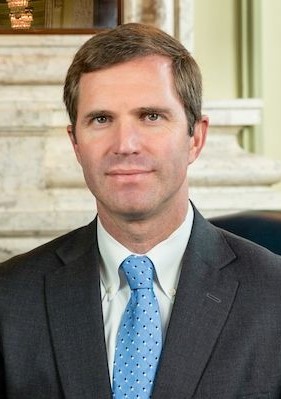 In November 2013, Beshear announced his candidacy for the 2015 election for Attorney General of Kentucky to succeed Democrat Jack Conway, who could not run for reelection due to term limits. He defeated Republican Whitney Westerfield by a margin of 0.2 percent, getting 50.1% of the vote to Westerfield's 49.9%.

Beshear was elected attorney general of Kentucky in November 2015. As attorney general, Beshear sued Governor Matt Bevin several times over issues such as health care and pensions, before challenging and narrowly defeating Bevin in the 2019 gubernatorial election.

In April 2016, Beshear sued governor Matt Bevin over his mid-cycle budget cuts to the state university system, which Beshear said Bevin was not authorized to do. The Kentucky Supreme Court issued a 5-2 ruling agreeing with Beshear that Bevin did not have the authority to make mid-cycle budget cuts without the approval of the General Assembly.

On July 9, 2018, Beshear declared his candidacy for the Democratic nomination for Governor of Kentucky in the 2019 election. His running mate was Jacqueline Coleman, a nonprofit president, assistant principal, and former state house candidate. In announcing his candidacy, Beshear said he would "make public education a priority." In May 2019, he won the Democratic nomination with 38 percent of the vote in a three-way contest.

By November 2018, Beshear had filed nine lawsuits against pharmaceutical companies for their alleged involvement in fueling Kentucky's opioid epidemic.

Beshear served just one term as Attorney General, foregoing a run for a second term in 2019 to run instead successfully for Governor. Beshear resigned from the Attorney General's office on December 10, 2019, to be sworn in as the 63rd Governor of Kentucky. He was replaced by Daniel Cameron on December 17.

On November 14, 2019, Bevin conceded the election after a recanvass was performed at his request that resulted in just one single change, an additional vote for a write-in candidate.

Beshear was inaugurated as governor at 12:01 a.m. on December 10, 2019. In his inaugural address at the public ceremony later that day, Beshear called on Republicans, who have a supermajority in both houses of the Kentucky Legislature, to reach across the aisle and solve Kentucky's issues in a bipartisan way. Beshear fired all eleven members of Kentucky's state education board on his first day in office, all of whom had been appointed by his predecessor, Matt Bevin, promising a fresh start. On December 12, 2019, Beshear signed an executive order to restore voting rights to all adults in Kentucky who have been convicted of non-violent felonies who have served their sentence, affecting over 156,000 eligible individuals.

Beshear began overseeing the state's response to the COVID-19 pandemic in early March 2020. There has been contentious political debate over his decision to dispatch state troopers to record the license plate numbers or VINs of persons that violated the state's stay-at-home order to attend in-person Easter Sunday church services in April.

On April 21, 2020, an attorney from Louisville, Kentucky, named James Gregory Troutman was arrested by Kentucky State Police and charged with one count of third-degree terroristic threatening for allegedly writing social media posts that were deemed as threats against Governor Andy Beshear's life, with one of the posts alluding to the 1900 assassination of William Goebel.

In June 2020, Beshear announced his resolve to work towards universal health care for all African-American residents of Kentucky in an attempt to resolve health care inequities which came to light during the COVID-19 Pandemic.