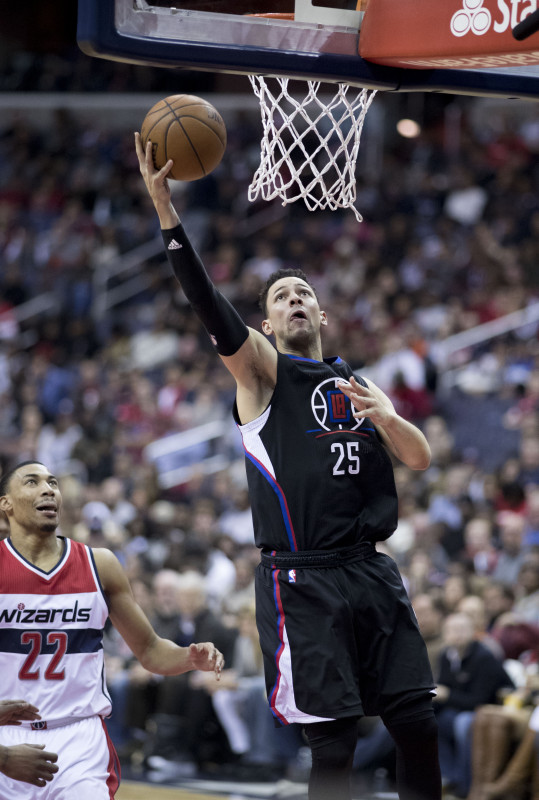 Austin James Rivers (born August 1, 1992) is an American professional basketball who last played for the New York Knicks of the National Basketball Association (NBA). Rivers led Winter Park High School to back-to-back Florida 6A state championships in 2010 and 2011. He also played in the 2011 Nike Hoop Summit for the Team USA, and was a McDonald's All-American.

In 2010, Rivers led Winter Park High School to the school's first state title in a 76–57 win against Dr. Phillips High School in the 6A state championship. Rivers scored 23 points in the game. In June 2010, Rivers was a part of the gold medal winning team at the FIBA Americas U18 Championship where he set a Team USA record for an U18 event with 35 points against Canada. On August 5, 2010, Rivers was named to the fifth annual Boost Mobile Elite 24 game, where he was named co-MVP after he had 25 points, 4 rebounds and 4 assists.

He was one of the top rated high school basketball players in the class of 2011, being rated as high as No. 1 by Rivals.com. On September 30, 2010, Rivers committed to Duke University. Rivers gained national recognition after making a game winning 3-pointer against Duke rival North Carolina in 2012. He was drafted with the 10th pick in the NBA draft by the New Orleans Hornets (now Pelicans), playing three seasons there before being traded to the Los Angeles Clippers. After three years with the Clippers, he was traded to the Wizards in June 2018. In December 2018, he joined the Houston Rockets.

On September 30, 2010, Rivers committed to Duke University. His commitment was widely covered by ESPN and various other sports networks given his status as the Class of 2011's top recruit. He officially signed with the program on November 16, 2010.

On March 5, 2011, Rivers led Winter Park to back to back Florida 6A state championships with a 52–44 victory over Dr. Phillips High School, in which he had 25 points, 11 rebounds and 4 steals. Rivers was named the 2011 Naismith Prep Player of the Year on March 10, 2011. He was also an All-American and All-State honoree, and played in the 2011 Nike Hoop Summit for Team USA.

As a freshman, Rivers played in Duke's exhibition games in China and Dubai during an international tour in August 2011. In the first game against the China men's national basketball team, Rivers scored 18 points on 8–19 shooting and led Duke to a 77–64 victory. In the second game (also against the Chinese national team), Rivers scored 12 points in a 78–66 victory, making several dunks during the first half. In the final game played in Beijing, Rivers chipped in 11 points as Duke topped the Chinese, 93–78. In his team's 86–66 victory over the Dubai national team, he scored 16 points, including 10 in the second quarter, on an array of impressive drives.

On February 8, 2012, his three-point basket as time expired allowed Duke to overcome an 82–72 deficit with two minutes to play in an 85–84 victory over the University of North Carolina. The victory ended North Carolina's 31 game winning streak at the Dean Smith Center.

On March 16, 2012, Rivers' college career ended in the "Round of 64" of the NCAA tournament, when Duke lost to Lehigh University. Rivers shot 5-14 from the field, while playing 34 minutes. Lehigh led for most of the game, earning their first NCAA Tournament victory.

On March 26, 2012, Rivers declared for the NBA draft, foregoing his final three years of college eligibility.

Rivers was selected by the New Orleans Hornets with the 10th overall pick the 2012 NBA draft. Rivers chose to wear the #25 jersey, the same number his father wore when he was in the NBA. The night before Rivers said, "I want to be like my dad, only better." Joining him as a rookie on the Hornets was Anthony Davis, the first overall pick of the draft. On July 24, 2012, Rivers signed his rookie scale contract with the Hornets. Three days later, Rivers underwent successful surgery to clean up bone spurs in his right ankle.

On October 31, 2012, Rivers made his NBA debut in the Hornets' season opener against the San Antonio Spurs. In 24 minutes as a starter, he scored 7 points on 1-of-9 shooting in a 99–95 loss. On December 14, he scored a then career-high 27 points in a 113–102 loss to the Minnesota Timberwolves. On March 6, 2013, he broke his hand and subsequently required surgery that forced him to miss the remainder of the season. For his rookie season, he averaged 6.2 points on 37% shooting from the field and 33% from three-point range. In April 2013, the Hornets changed their name to the Pelicans.

On October 16, 2013, the Pelicans exercised their third-year team option on Rivers' rookie scale contract, extending the contract through the 2014–15 season. On April 12, 2014, Rivers recorded season-highs in points and rebounds with 20 and 10 respectively in the Pelicans' 111–104 loss to the Houston Rockets.

On October 24, 2014, the Pelicans declined to exercise their fourth-year team option on Rivers' rookie scale contract, thereby not extending the contract through the 2015–16 season. On December 20, 2014, he scored a season-high 21 points in a 114–88 loss to the Portland Trail Blazers.

On January 12, 2015, Rivers was traded to the Boston Celtics in a three-team trade involving the Pelicans and the Memphis Grizzlies. Three days later, he joined his father at the Los Angeles Clippers after he was traded in a three-team trade involving the Celtics and the Phoenix Suns. On January 16, Rivers made his debut for the Clippers and became the first son to play for his father in an NBA game. On February 21, Rivers scored a then career-high 28 points in a 129–98 win over the Sacramento Kings. On May 8, he scored a playoff career-high 25 points in the Clippers' 124–99 victory that gave them a 2–1 lead in the Western Conference semi-finals against the Houston Rockets.

On January 16, 2015, Rivers became the first player in NBA history to play for his father, coach Doc Rivers, then-head coach of the Clippers.

On July 13, 2015, Rivers re-signed with the Clippers. On February 6, 2016, he was ruled out for four to six weeks with a broken left hand. On March 31, he scored a career-high 32 points in a 119–117 loss to the Oklahoma City Thunder. On April 29, Rivers recorded 21 points and eight assists against the Portland Trail Blazers in Game 6 of their first-round playoff series. However, with a 106–103 loss, the Clippers were eliminated from the playoffs. In the game, Rivers required 11 stitches above his left eye from a collision in the first quarter.

On July 8, 2016, Rivers again re-signed with the Clippers. On December 14, 2016, he scored a season-high 25 points on 7-of-10 from three-point range and 9-of-12 from the field in a 113–108 win over the Orlando Magic. On January 4, 2017, he set a new season high with 28 points in a 115–106 win over the Memphis Grizzlies. He averaged career highs of 12.0 points, 2.2 rebounds and 2.8 assists during the 2016–17 regular season, but due to a strained left hamstring, Rivers missed the last six games of the regular season and the first four games of the playoffs before returning in Game 5 of the Clippers' first-round playoff series against the Utah Jazz.

On December 3, 2017, Rivers scored a season-high 30 points in a 112–106 loss to the Minnesota Timberwolves. On December 22, 2017, he scored 30 of his career-high 36 points in the second half of the Clippers' 128–118 win over the Houston Rockets. The following night, he set a new career high with 38 points in a 115–112 loss to the Memphis Grizzlies. Rivers missed 18 games between late December and early February with a heel bruise.

His first child with Brittany Hotard, Kayden, was born in 2018. As of 2020, Rivers is expecting his second child with Audreyana Michelle. Their son was born in March 2021.

On December 24, 2018, Rivers signed with the Houston Rockets. On January 5, 2019, he scored a season-high 21 points in a 110–101 loss to the Portland Trail Blazers. On April 7, in a 149–113 blowout win against the Phoenix Suns, Rivers made the 27th three-pointer of the game with 1:09 left on the clock in the fourth quarter, beating the Rockets’ own previous record of most made threes by one team in a game (26). He appeared in 47 games while averaging 8.7 points, 2.3 assists and 1.9 rebounds in 28.6 minutes per game. The Rockets won 72% of their games after signing Rivers. He started 13 straight games as a Rocket from Dec. 31 through Jan. 25, averaging 11.6 points, 3.8 assists and 2.7 rebounds in 38.1 minutes per game. Houston was 15–5 when Rivers scored in double-figures and 9–1 when he recorded at least four assists. He also had nearly as many steals (29) as turnovers (32) with the Rockets. On August 9, 2020, Rivers scored a career-high 41 points off the bench and the Rockets used a big third quarter to pull away and cruise to a 129-112 victory over the Sacramento Kings in the Orlando bubble. Rivers made six 3-pointers as Houston improved to 4-1 at Disney on a night the Rockets played a second straight game without Russell Westbrook, who had a bruised right quadriceps.