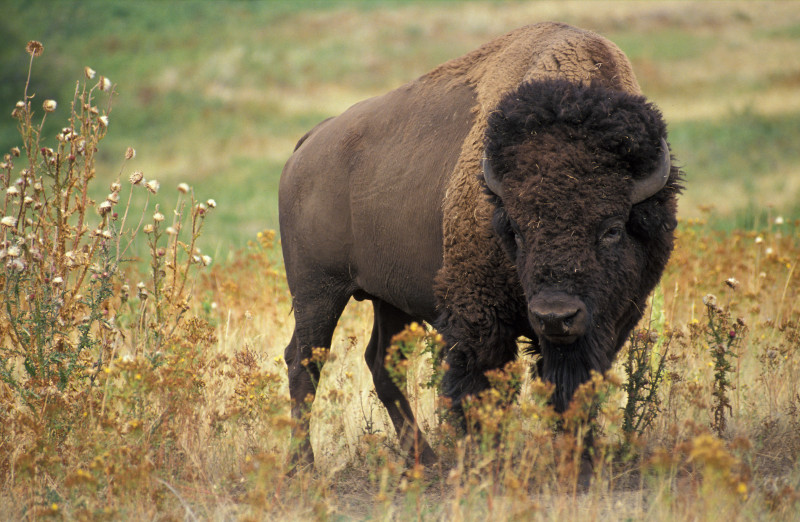 The earliest plausible accounts of captive bison are those of the zoo at Tenochtitlan, the Aztec capital, which held an animal the Spaniards called "the Mexican bull". In 1552, Francisco Lopez de Gomara described Plains Indians herding and leading bison like cattle in his controversial book, Historia general de las Indias. Gomara, having never visited the Americas himself, likely misinterpreted early ethnographic accounts as the more familiar pastoralist relationship of the Old World. Today, bison are increasingly raised for meat, hides, wool, and dairy products. The majority of bison in the world are raised for human consumption or fur clothing. Bison meat is generally considered to taste very similar to beef, but is lower in fat and cholesterol, yet higher in protein than beef, which has led to the development of beefalo, a fertile hybrid of bison and domestic cattle. A market even exists for kosher bison meat; these bison are slaughtered at one of the few kosher mammal slaughterhouses in the U.S. and Canada, and the meat is then distributed worldwide.

The term "buffalo" is sometimes considered to be a misnomer for this animal, as it is only distantly related to either of the two "true buffalo", the Asian water buffalo and the African buffalo. Samuel de Champlain applied the term buffalo (buffles in French) to the bison in 1616 (published 1619), after seeing skins and a drawing shown to him by members of the Nipissing First Nation, who said they travelled 40 days (from east of Lake Huron) to trade with another nation who hunted the animals. Though "bison" might be considered more scientifically correct, as a result of standard usage, "buffalo" is also considered correct and is listed in many dictionaries as an acceptable name for American buffalo or bison. Buffalo has a much longer history than bison, which was first recorded in 1774.

In America, the commercial industry for bison has been slow to develop despite individuals, such as Ted Turner, who have long marketed bison meat. In the 1990s, Turner found limited success with restaurants for high-quality cuts of meat, which include bison steaks and tenderloin. Lower-quality cuts suitable for hamburger and hot dogs have been described as "almost nonexistent". This created a marketing problem for commercial farming because the majority of usable meat, about 400 pounds for each bison, is suitable for these products. In 2003, the United States Department of Agriculture purchased $10 million worth of frozen overstock to save the industry, which would later recover through better use of consumer marketing. Restaurants have played a role in popularizing bison meat, like Ted's Montana Grill, which added bison to their menus. Ruby Tuesday first offered bison on their menus in 2005.

Throughout most of their historical range, landowners have sought restrictions on free-ranging bison. Herds on private land are required to be fenced in. In the state of Montana, free-ranging bison on public lands may be shot, due to concerns about transmission of disease to cattle and damage to public property. In 2013, Montana legislative measures concerning the bison were proposed and passed the legislature, but opposed by Native American tribes as they impinged on sovereign tribal rights. Three such bills were vetoed by Steve Bullock, the governor of Montana. The bison's circumstances remain an issue of contention between Native American tribes and private landowners.

As of July 2015, an estimated 4,900 bison lived in Yellowstone National Park, the largest U.S. bison population on public land. During 1983–1985 visitors experienced 33 bison-related injuries (range = 10–13/year), so the park implemented education campaigns. After years of success, five injuries associated with bison encounters occurred in 2015, because visitors did not maintain the required distance of 75 ft (23 m) from bison while hiking or taking pictures.

There are also remnant purebred American bison herds on public lands in North America. Herds of importance are found in Yellowstone National Park, Wind Cave National Park in South Dakota, Blue Mounds State Park in Minnesota, Elk Island National Park in Alberta, and Grasslands National Park in Saskatchewan. In 2015, a purebred herd of 350 individuals was identified on public lands in the Henry Mountains of southern Utah via genetic testing of mitochondrial and nuclear DNA. This study, published in 2015, also showed the Henry Mountains bison herd to be free of brucellosis, a bacterial disease that was imported with non-native domestic cattle to North America.

In 2016, DNA extracted from Bison priscus fossil remains beneath a 130,000-year-old volcanic ashfall in the Yukon suggested recent arrival of the species. That genetic material indicated that all American bison had a common ancestor 135,000 to 195,000 years ago, during which period the Bering Land Bridge was exposed; this hypothesis precludes an earlier arrival. The researchers sequenced mitochondrial genomes from both that specimen and from the remains of a recently discovered, estimated 120,000-year-old giant, long-horned, B. latifrons from Snowmass, Colorado. The genetic information also indicated that a second, Pleistocene migration of bison over the land bridge occurred 21,000 to 45,000 years ago.