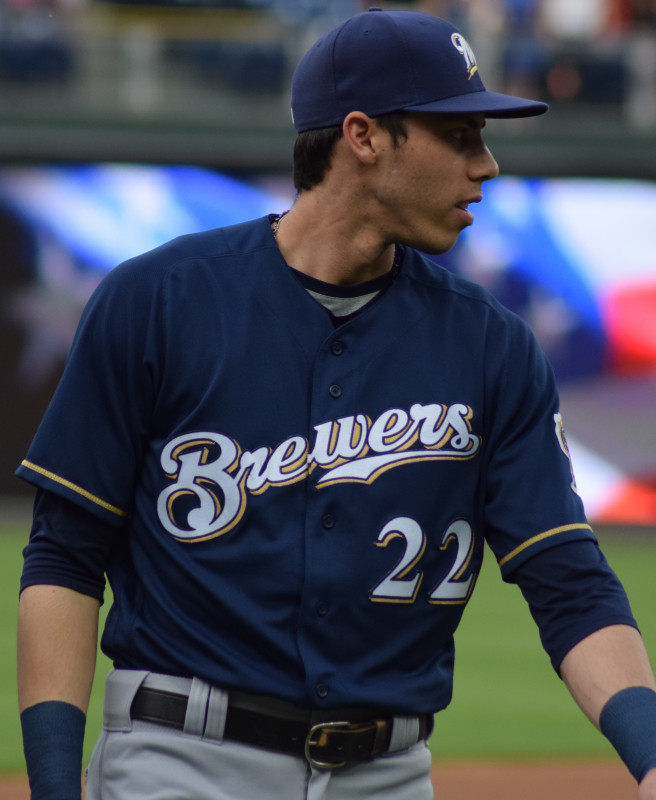 Yelich was offered a scholarship to play at the collegiate level with the Miami Hurricanes baseball team. However, he was drafted by the Marlins 23rd overall in the 2010 Major League Baseball draft and agreed to a $1.7 million signing bonus on August 17, shortly before the deadline to sign 2010 draftees was about to pass. Yelich played for the Gulf Coast League Marlins for six games, getting nine hits and seven strikeouts with a batting average of .375 before being advanced to Class-A. He played in six games for the Greensboro Grasshoppers in 2010, batting .348. In 2011, he batted .261 with 43 hits, six strikeouts and four home runs. Yelich was named the Marlins' Minor League Player of the Year in both 2011 and 2012.

The Marlins selected Yelich in the first round of the 2010 MLB draft. He made his major league debut for the Marlins in 2013, and was traded to the Brewers in the 2017-18 offseason. Yelich won a Gold Glove Award in 2014, the Silver Slugger Award in 2016 and 2018, and the National League's Most Valuable Player Award in 2018.

On July 23, 2013, the Marlins promoted Yelich to the major leagues from the Double-A Jacksonville Suns. He had a fantastic 2014 season, batting .284 with 21 steals out of the leadoff spot for the Miami Marlins. He also won a Gold Glove Award in left field, becoming the franchise's youngest ever player and first outfielder to win the award. During the season, Yelich set a franchise record for fielding percentage in left field, at .996. He served as the final out of Jordan Zimmermann's no-hitter on September 28, 2014, when Steven Souza Jr. made a diving play to save the no-hitter.

Yelich and the Marlins finalized a seven-year, $49.57 million contract extension on March 22, 2015. He struggled to start the season, and was placed on the disabled list in April with lower back strain before making his return on May 8. His batting average reached a season low of .178 on May 22. In August, Yelich bruised his right knee and was again placed on the disabled list. Yelich had improved from his earlier offensive struggles and was hitting .275/.343/.376 with six home runs, 29 RBIs and 14 stolen bases up to that point in the season. Despite aggravating the injury shortly after his return, Yelich remained an active player for the quality of his bat. Near the end of the season, Yelich shared the field with Marcell Ozuna, the outfielder who had replaced him during his second stint on the disabled list. Yelich closed the 2015 season with a .300 average. For the season, he had the highest ground ball percentage (62.5%), and the lowest fly ball percentage (15.0%), of all major league hitters.

On January 25, 2018, the Marlins traded Yelich to the Milwaukee Brewers for Lewis Brinson, Isan Díaz, Monte Harrison, and Jordan Yamamoto. Yelich was named to the 2018 MLB All-Star Game after batting .285 with 11 home runs, 36 RBIs, and 11 stolen bases. Yelich, a reserve for the National League, replaced Matt Kemp in left field and went 1-for-3, hitting a solo home run in an 8–6 extra-inning loss to the American League. On August 29, Yelich hit for the cycle against the Cincinnati Reds, collecting a total of six hits in the game. On September 2, Yelich hit his first career grand slam, in a game against the Washington Nationals. On September 17, Yelich hit for the cycle, also against the Cincinnati Reds, for the second time in 19 days, becoming the fifth player in MLB history to hit two cycles in the same season and the first player in MLB history to do so against the same team.

On September 10, 2018, he was selected to play with the MLB All-Stars at the 2018 MLB Japan All-Star Series, but he later withdrew from the event.

On March 31, 2019, Yelich became the sixth player in MLB history to hit a home run in each of his team's first four games.

On July 1, 2019, Yelich became the first player in Brewers franchise history to reach 30 home runs before the All-Star Break, beating former Brewer Prince Fielder's record of 29 home runs. Yelich was selected to participate in the Home Run Derby but had to withdraw due to a back injury. He was replaced by Matt Chapman in the Home Run Derby. On September 10, 2019, Yelich hit a foul ball off his kneecap and left the game. Shortly thereafter, it was revealed that his right kneecap was fractured, which prematurely ended his 2019 season.