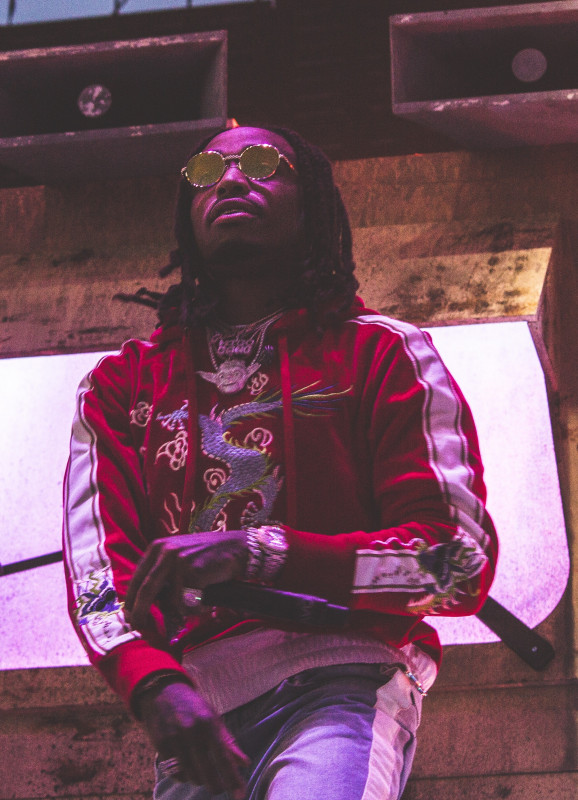 Quavious Keyate Marshall (born April 2, 1991), known professionally as Quavo (/ˈkweɪvoʊ/), is an American rapper, singer, songwriter, and record producer. He is best known as a member of the hip hop and trap music trio Migos. Quavo is related to his fellow Migos members, being Takeoff's uncle and Offset's cousin.

Quavious Keyate Marshall was born on April 2, 1991, in Athens, Georgia. Marshall's mother, Edna Marshall, was a hairdresser and his father died when he was four years old. The three members of the Migos grew up together in Gwinnett County, a mostly suburban area half an hour northeast of Atlanta.

Migos was formed in 2008 by Quavo and fellow rappers Takeoff and Offset. The three members are directly related and were raised together by Quavo's mother. Quavo is Takeoff's uncle, and Offset is Quavo's cousin. The group was originally known as Polo Club and are from Lawrenceville, Georgia. The group eventually decided to change their name to "Migos" after deciding Polo Club was too generic. The group released their first full-length project, a mixtape titled Juug Season, on August 25, 2011. They followed with the mixtape No Label, on June 1, 2012.

Marshall attended Berkmar High School and was the starting quarterback of its football team during the 2009 season, his senior year. Berkmar went 1-9 in the 2009 season, and Marshall went 19-of-25 for 201 yards and three touchdowns for the first win of the season. Quavo previously held the record by completing 28 passes in a game back in 2009.

Migos initially rose to prominence in 2013 after the release of their single "Versace". The song was remixed by Canadian rapper Drake and peaked at number 99 on the Billboard Hot 100 chart and number 31 on the Hot R&B/Hip-Hop Songs. Quavo had his first lead single as a solo artist with the song "Champions" featuring several other artists, the song peaked at number 71 on the Billboard Hot 100.

In April 2017, Quavo was featured on The Fate of the Furious: The Album on the song "Go Off" with Lil Uzi Vert and Travis Scott. The song was eventually certified Gold by the RIAA. Quavo also released "Ice Tray" with Lil Yachty on December 14, 2017. The song peaked at number 74 on the Billboard Hot 100.

On December 21, 2017, Quavo announced that he would release Huncho Jack, Jack Huncho with Travis Scott on December 22, 2017 without any prior promotion. The album had eight songs that debuted on the Billboard Hot 100.

On January 26, 2018, Migos released Culture II. Quavo released three singles for his upcoming debut solo album, "Workin Me", "Lamb Talk" and "Bubble Gum" with "Workin Me" peaking at 52 on the Billboard Hot 100, Quavo's highest yet.

Outside of Migos, Quavo has been featured on four singles that have peaked within the top 10 of the Billboard Hot 100, including DJ Khaled's "I'm the One" and “No Brainer”. Both songs are by Khaled and feature vocals from Justin Bieber, Quavo, and Chance the Rapper, with “I’m the One” having an extra feature from Lil Wayne. On October 12, 2018, he released his debut solo album, Quavo Huncho which peaked at number 2 on the Billboard 200.

On May 18, 2019, Quavo performed "Future" alongside Madonna at the grand final of the Eurovision Song Contest 2019.

Despite finishing the football season for his senior year, Marshall dropped out of Berkmar months before graduation. He then returned to Berkmar and graduated in 2020.