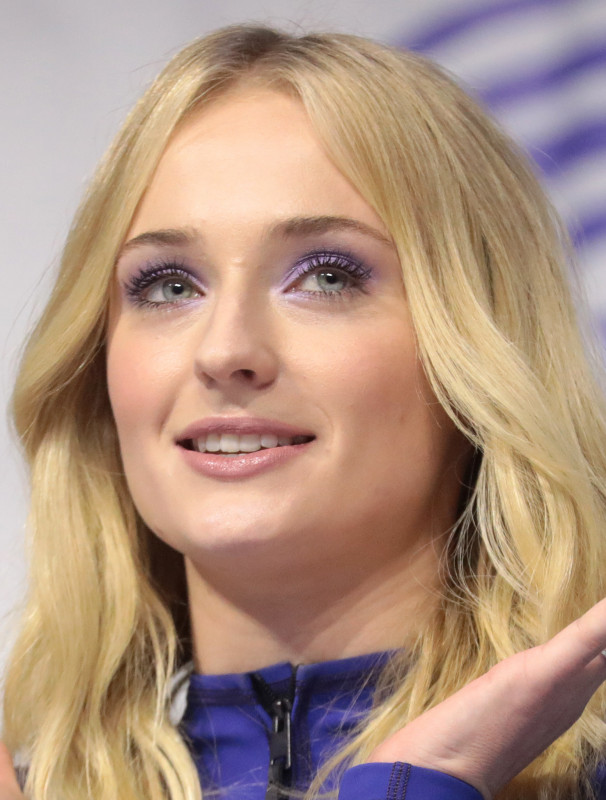 In November 2017, Turner was cast to play Juliane Koepcke in the movie Girl Who Fell From the Sky. She will also produce the movie. In March and April 2018, she filmed the independent film Heavy in Toronto, Ontario, Canada. Turner reprised her role as Jean Grey in the X-Men film Dark Phoenix, which takes place in 1992 and follows the events of Apocalypse. The film was released in June 2019.

Sophie Belinda Jonas (née Turner; 21 February 1996) is a British actress. She is best known for portraying Sansa Stark on the HBO fantasy television series Game of Thrones (2011–2019), which earned her a Primetime Emmy Award nomination for the Outstanding Supporting Actress in a Drama Series in 2019.

Sophie Belinda Turner was born in Northampton, England on 21 February 1996, the daughter of Sally, a nursery school teacher, and Andrew, who works for a pallet distribution company. She moved to Chesterton, Warwickshire when she was 2 years old. She attended Warwick Prep School until she was 11, and later attended the independent The King's High School for Girls. Turner has been a member of the theatre company Playbox Theatre Company since she was 3 years old. She has two older brothers. Her twin died before birth.

Turner was cast as Sansa Stark, a young noblewoman, in the HBO fantasy drama series Game of Thrones in August 2009. Filming began in July 2010, when Turner was 14 years old. Sansa is Turner's first television role. Turner's drama teacher encouraged her to audition for the part, and she dyed her blonde hair auburn for the role, although in Season 7 she began wearing wigs. In 2012, she was nominated for the Young Artist Award for Best Performance in a TV Series – Supporting Young Actress for her performance as Sansa, alongside her on-screen sister, Maisie Williams. Turner appeared in all eight broadcast seasons.

In 2013, she had her first movie role as the lead character in the independent thriller film Another Me, based on the novel of the same name by Catherine MacPhail. She starred as Adeline March in the 2013 television film The Thirteenth Tale. In 2013, she was cast in the comedy film Barely Lethal, alongside Hailee Steinfeld, which was released on 29 May 2015 in a limited release and through video on demand. Turner also narrated the audiobook version of the Lev Grossman short story "The Girl in the Mirror", which was included in the short fiction anthology Dangerous Women and was edited by George R. R. Martin. In 2014, she narrated the audiobook City of Heavenly Fire by Cassandra Clare. The same year, she was the face of Karen Millen's "The Journey" campaign. Turner played mutant Jean Grey in X-Men: Apocalypse, which was released in May 2016 to mixed critical success.

During the summer 2016, she hosted the web video Powershift in partnership with the Huffington Post. In March 2017, she announced she had become patron of Women for Women, an organisation that supports female war survivors. In August 2017, Turner said she believed her social media following was responsible for her successful casting in an unnamed project rather than her abilities as an actress, saying, "[I]t was between me and another girl who is a far better actress than I am, far better, but I had the followers, so I got the job." In June 2017, she began a partnership with Wella Hair, becoming its first international brand ambassador.

In March 2019, Turner was asked in a Rolling Stone interview about her sexuality after mentioning boys as well as girls, stating that she finds herself loving "a soul, not a gender." During the same interview, she lists herself as 'Boy George,' alluding to the internet comparison between her and 1980s era musician Boy George. She also discusses the "occult-looking" triangular tattoo on her left bicep, noting that it is based upon “Plato's theory that the soul is comprised of three parts — reason, spirit and appetite." Turner's brother Will has a matching one; "he's supposed to be the 'Spirit part'. Her other brother James, is Reason," she says, but chose not to get a tattoo. "I'm Appetite," Turner says. "Because I'm hungry for everything. I need everything. Not material-wise, but I need to do these jobs and I have to consume everything. And, also, I like eating." On her right arm is an outline of a bunny. She also has a tattoo with the words 'The Pack Survives'.

Turner married American singer Joe Jonas at A Little White Wedding Chapel in Las Vegas, Nevada on 1 May 2019, right after the 2019 Billboard Music Awards. Following her marriage, Turner legally changed her last name to Jonas; the couple resides in New York City. She and Jonas repeated their marriage vows on 29 June 2019 in the presence of their family and friends in France. Turner's Game of Thrones co-star Maisie Williams was one of two maids of honour, and Jonas's brothers Nick and Kevin Jonas served as groomsmen. Turner was the inspiration for the song "Hesitate" on the Jonas Brothers album Happiness Begins, which was written by Joe as a love letter to her.

In September 2019, Turner was cast in the thriller television show Survive.