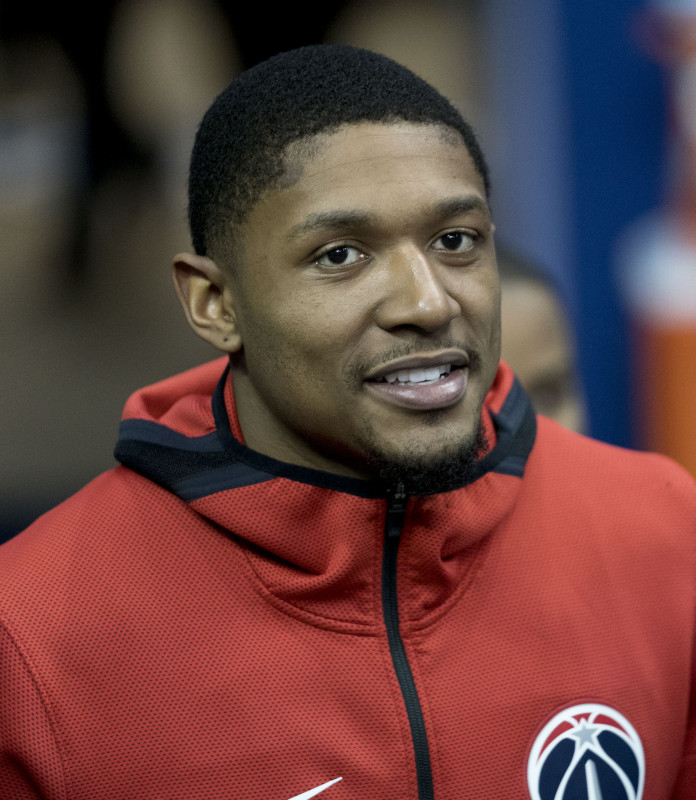 On January 13, he had his second triple-double of the season, collecting season highs of 43 points and 15 assists along with 10 rebounds in a 140–138 double-overtime loss to the Raptors. He joined Oscar Robertson as the only players in NBA history with multiple games of 40 points, 15 assists and 10 rebounds in a season—Robertson had three such games in 1961–62. On February 22, he scored a season-high 46 points in a 123–110 loss to the Charlotte Hornets.

Bradley Emmanuel Beal Sr. (born June 28, 1993) is an American professional basketball player for the Washington Wizards of the National Basketball Association (NBA). He played college basketball for the Florida Gators before being selected by the Wizards with the third overall pick in the 2012 NBA draft. Beal was selected in the 2013 NBA All-Rookie First Team, and is a three-time NBA All-Star.

On February 24, 2017, he scored 40 points in a 120–112 loss to the Philadelphia 76ers, recording his fourth 40-point game of the season. On March 29, 2017, he scored 27 points in a 133–124 loss to the Los Angeles Clippers. During the game, Beal surpassed Gilbert Arenas for the franchise single-season three-point record. He made five against the Clippers to finish with 209 by the end of the game—Arenas had 205 in 2004–05 and 2006–07. Beal joined Kevin Durant and Vince Carter as the only three players in NBA history, 23 years old or younger, to average at least 23 points and shoot above 40 percent from three-point range.

On February 23, 2020, Beal scored a then career-high 53 points in a 126–117 loss to the Chicago Bulls. During the game, Beal also passed Jeff Malone for second on the Wizards' all time scoring list. The following day, Beal again surpassed his career-high, this time with a 55-point performance in a 140–137 overtime loss to the Milwaukee Bucks. Beal became the first player to score 50 points on consecutive nights since Kobe Bryant in 2007. On February 28, Beal scored 42 points alongside 10 assists in a 119–129 loss to the Utah Jazz. In total, Beal averaged an impressive 36.2 points per game in the month of February, which led the league. This included a streak in which Beal scored at least 26 points in 21 consecutive games, a streak that ended on March 8 when Beal scored 23 points in a 100–89 loss to the Miami Heat. Two days later, Beal recorded 39 points and 7 assists in a 122–115 win against the New York Knicks, his final game before the abrupt suspension of the 2019–20 NBA season. At the time of the suspension, Beal had appeared in 57 games, averaging 30.5 points and 6.1 assists. His 30.5 points per game were second only to James Harden.

On November 30, 2009, Beal committed to the University of Florida. Beal accepted an athletic scholarship to attend the university, where he played for coach Billy Donovan's Gators team during the 2011–12 season.

In his first game at Florida, Beal started and recorded 14 points. Beal was named SEC Freshman of the Week on November 28, 2011. During the week of 11/21–11/28, Beal averaged 18.5 points, seven rebounds, two assists and 1.5 steals in two wins over Wright State and Jacksonville.

On April 13, 2012, Beal declared for the NBA draft, foregoing his final three years of college eligibility. On June 28, 2012, Beal was drafted with the third overall pick in the 2012 NBA draft by the Washington Wizards.

Beal was named the Eastern Conference Rookie of the Month in December 2012 and January 2013. On January 4, 2013, in a game against the Brooklyn Nets, Beal scored a then career high 24 points and hit a clutch three-pointer to send the game to double overtime; the Wizards went on to lose the game. On January 17, Beal set a then career best with six three-pointers made in a loss to the Sacramento Kings. He went on to be selected to appear in the Rising Stars competition at the 2013 All-Star weekend.

On April 3, 2013, it was announced that Beal would miss the remainder of the 2012–13 season with a right leg injury. At the end of the season, after playing 56 games, he was named to the NBA All-Rookie first team, and finished third in voting for the NBA Rookie of the Year award.

On November 10, 2013, Beal surpassed his then career-high by scoring 34 points in an overtime loss to the Oklahoma City Thunder. He later set a then benchmark for his personal best by scoring a career-high 37 points in a loss to the Memphis Grizzlies. Beal finished as runner-up in the Three-Point Shootout at the 2014 NBA All-Star Weekend in New Orleans, losing to Marco Belinelli. At the time, Beal was the youngest competitor in the event's history. On April 29, 2014, Beal and the Wizards defeated the Bulls in the first round of the Eastern Conference Playoffs, moving the team on to the second round, a feat the franchise hadn't reached since 2005.

On October 11, 2014, Beal underwent an MRI that revealed a non-displaced fracture of the scaphoid bone in his left wrist, subsequently requiring surgery. He was later ruled out for six to eight weeks. After missing the first nine games of the season with the injury, he made his season debut on November 19 against the Dallas Mavericks.

On November 4, 2015, Beal scored a game-high 25 points and made a three-pointer with 0.3 seconds remaining to lift the Wizards to a 102–99 win over the San Antonio Spurs. Beal had an injury-plagued season in 2015–16, as he missed three games in mid-November with a shoulder injury, and 16 games between December 11 and January 11 with a lower right leg injury. He had another stint on the sidelines in early March, missing three games with a sprained pelvis. He played in a career-low 55 games in 2015–16, and made a career-low 35 starts, but did record a career-high 17.4 points per game.

On July 26, 2016, Beal re-signed with the Wizards. On November 19, 2016, he scored 34 points in a 114–111 loss to the Miami Heat. Two days later, he had 30 or more in consecutive games for the first time in his five-year career, recording a then career-high 42 points in a 106–101 win over the Phoenix Suns. On November 27, he was fined $15,000 for grabbing at the throat of Evan Fournier during the Wizards' game against the Orlando Magic two days earlier. On November 28, he scored 31 points and hit a career-high seven three-pointers in a 101–95 overtime win over the Sacramento Kings.

On December 14, he recorded 20 points and a then career-high nine assists in a 109–106 win over the Charlotte Hornets. With two made three-pointers on December 16 against the Detroit Pistons, Beal reached 501 career three-pointers and became the third Wizards player to make 500, joining Gilbert Arenas and Antawn Jamison. On December 18, he had a 41-point effort in a 117–110 win over the Los Angeles Clippers. On February 6, 2017, he had another 41-point effort in a 140–135 overtime loss to the Cleveland Cavaliers.

On May 12, 2017, Beal helped the Wizards avoid elimination and force a Game 7 in their second-round playoff series against the Boston Celtics with a game-high 33 points in a 92–91 Game 6 win. In Game 7 three days later, Beal led the Wizards—a team playing in its first Game 7 since 1979—with 38 points, including 24 in the second half, but he couldn't lead them to victory as they fell 115–105 to bow out of the playoffs with a 4–3 defeat.

On December 31, 2017, Beal scored 17 of his 39 points in the fourth quarter to lead Washington to a 114–110 win over the Chicago Bulls. He scored 15 straight points in the fourth as the Wizards rallied from an eight-point deficit early in the period. He also had nine rebounds and tied a then career high with nine assists. Beal was subsequently named Eastern Conference Player of the Week for games played Monday, December 25 through Sunday, December 31.

On October 20, 2018, Beal scored 32 points, going 6 for 11 on 3-pointers, in a 117–113 loss to the Toronto Raptors. He broke Washington's franchise record for most 3-pointers in a career, surpassing Gilbert Arenas (868) by making his 869th during the fourth quarter. On November 14, he scored 20 points and hit three 3-pointers in a 119–95 win over the Cleveland Cavaliers. Beal hit his 900th career 3-pointer in the first quarter, becoming the youngest player in NBA history to reach 900. On November 26, he equaled his season high with 32 points in a 135–131 overtime win over the Houston Rockets. On December 5, he set a new season high with 36 points in a 131–117 win over the Atlanta Hawks. He was subsequently named Eastern Conference Player of the Week for games played Monday, December 3, through Sunday, December 9. On December 22, he recorded his first career triple-double with 40 points, a career-high 15 assists and 11 rebounds in a 149–146 triple-overtime win over the Phoenix Suns.

On July 7, 2020, the Wizards announced that Beal would not participate in 2019–20 NBA restart in Walt Disney World at Orlando due to a shoulder injury.

Beal finished February averaging a career-high 30.9 points while shooting 52.2 percent from the field. On March 15, he scored 40 points in a 116–110 loss to the Hornets. He had 40 points for the second straight game a day later and made a career-high nine 3-pointers in a 135–128 win over the Memphis Grizzlies. He was subsequently named Eastern Conference Player of the Week for games played Monday, March 11, through Sunday, March 17. In April 2019, he became the first player in franchise history with 2,000 points, 400 rebounds and 400 assists in a season. He also became the first player in Wizards franchise history to average at least 25 points, five rebounds and five assists, while appearing in all 82 games for the second consecutive season.

On October 17, 2019, Beal signed a two-year contract extension worth a maximum of $72 million to remain with the Wizards. On October 30, 2019, Beal recorded 46 points and 8 assists in a 159–158 loss to the Houston Rockets. In November, Beal scored 44 points in consecutive games, in a loss to the Boston Celtics and a win over the Minnesota Timberwolves, respectively.

Beal and his wife Kamiah Adams have two sons together. In August 2020, Beal sold his 12,000 square-foot French Provenceal-style McLean, Virginia mansion for $3.5 million to co-founder of &pizza, entrepreneur Steve Salis.

On January 6, 2021, Beal put up a career high of 60 points in a 141–136 loss to the Philadelphia 76ers, tying Gilbert Arenas' Wizards franchise record for points scored in a game by an individual. On February 18, 2021, Beal was selected to play in his third All-Star Game as a starter. Beal was selected by to play on Kevin Durant's team as a starter for the All-Star Game, joining his childhood friend Jayson Tatum.

On February 8, 2022, Beal planned to undergo season-ending surgery on his left wrist. Beal played forty games on the season but also shot a career low 30% from three-point range.