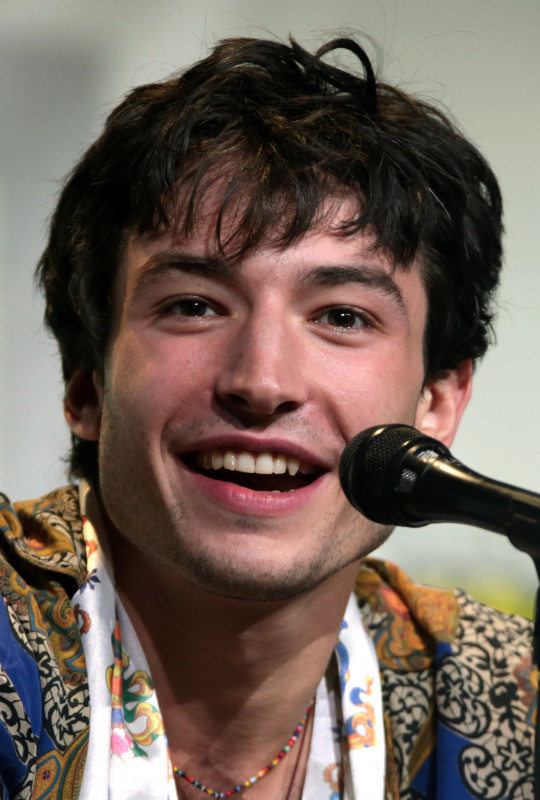 Ezra Matthew Miller was born in Wyckoff, New Jersey, on September 30, 1992. They have two older sisters named Saiya and Caitlin. Their mother, Marta Miller (née Koch), is a modern dancer. Their father, Robert S. Miller, was senior vice president and managing director of Hyperion Books, and later became a publisher at Workman Publishing. Miller's father is Jewish; their mother is of Dutch and German descent. Miller identifies as Jewish and "spiritual". At the age of six, they started to train as an opera singer in order to overcome a speech impediment. They have sung with the Metropolitan Opera, and performed in the American premiere of Philip Glass's opera White Raven. Miller attended Rockland Country Day School and The Hudson School, dropping out at age 16 after the release of the film Afterschool.

Ezra Matthew Miller (born September 30, 1992) is an American actor. Their feature film debut was in Afterschool (2008), which they followed by starring in the drama We Need to Talk About Kevin (2011) and The Perks of Being a Wallflower (2012). In 2015, they co-starred in the drama The Stanford Prison Experiment and the comedy Trainwreck, before playing Credence Barebone / Aurelius Dumbledore in the Fantastic Beasts films Fantastic Beasts and Where to Find Them (2016), Fantastic Beasts: The Crimes of Grindelwald (2018), and Fantastic Beasts: The Secrets of Dumbledore (2022). In 2020, they also had a recurring role on the miniseries The Stand as Donald Merwin "Trashcan Man" Elbert.

Miller's career in film began in 2008 with Antonio Campos' Afterschool, in the role of a teenager at a boarding school who accidentally films the drug-related deaths of two classmates, and is then asked to put together a memorial video. The following year they appeared in City Island with Andy García, Julianna Margulies, and Steven Strait. In 2010, Miller portrayed the lead of Beware the Gonzo and had a supporting role in Every Day, both of which premiered at the Tribeca Film Festival. They next appeared in the BBC Films drama We Need to Talk About Kevin (2011), alongside Tilda Swinton and John C. Reilly, which was adapted and directed by Lynne Ramsay from American author Lionel Shriver's 2003 novel of the same name. In television, Miller played Damien on the Showtime hit comedy series Californication. They then appeared on Royal Pains as Tucker Bryant for two seasons. In the 2012 film adaptation of the novel The Perks of Being a Wallflower, Miller played Patrick, alongside Logan Lerman and Emma Watson.

In 2010, Miller dated Zoë Kravitz while they were filming Beware the Gonzo.

Miller came out as queer in 2012, but avoids the use of the label "queer". They had also said in 2018, "Queer just means no, I don't do that. I don't identify as a man. I don't identify as a woman. I barely identify as a human." Miller uses they/them pronouns, which GQ wrote in 2020 was "a pointed refusal to be gendered". They previously used all pronouns interchangeably but, as of 2022 , use they/them, it, or zir pronouns. Having expressed an interest in "kissing boys" at a young age, Miller said, "The way I would choose to identify myself wouldn't be gay. I've been attracted mostly to 'shes' but I've been with many people and I'm open to love whatever it can be." Miller also commented on having "a lot of really wonderful friends who are of very different sexes and genders. I am very much in love with no one in particular."

In 2018, Miller showed support for the #MeToo movement and revealed a personal experience concerning a Hollywood producer and a director, both of whom were left unnamed: "They gave me wine and I was underaged. They were like, 'Hey, want to be in our movie about gay revolution?' And I was like, 'No, you guys are monsters.'" Later that year, they announced that they were in a polyamorous relationship with multiple people, including their bandmates in the rock band Sons of an Illustrious Father.

Miller portrays Barry Allen as the Flash in Warner Bros.' DC Comics adaptations, first appearing in cameos in Batman v Superman: Dawn of Justice and Suicide Squad, and continuing the role as one of the leads in Justice League. They are set to play the character in the standalone film The Flash, which is set to be released in 2023. Miller attended Middle East Film and Comic Con in 2018 representing their character in the DC Comics franchise film Justice League. In 2020, they reprised the role of the Flash for a cameo appearance in the Arrowverse crossover event, Crisis on Infinite Earths.

Miller has been credited with singing, drumming and percussion on musical recordings by the band Sons of an Illustrious Father as early as 2011. The band is a trio that features Lilah Larson (vocals, guitar, bass and drums), Josh Aubin (bass, keyboards, guitar, vocals), and Miller. In 2019, the band released a cover of "Don't Cha" by the Pussycat Dolls and Miller appeared in its music video.

In December 2020, Miller portrayed Trashcan Man in the Paramount+ television miniseries The Stand, based on the Stephen King novel of the same name.

On January 27, 2022, Miller posted a video on Instagram that seemed to threaten members of the Ku Klux Klan operating in Beulaville, North Carolina. In response, the Southern Poverty Law Center reported no knowledge of recent Klan activity in Beulaville.

According to Insider, Miller began to travel while wearing a bulletproof vest and carrying at least one firearm in early 2022 following fears that they were being followed by members of the Ku Klux Klan and the Federal Bureau of Investigation (FBI). Tokata Iron Eyes, Miller's partner, later referred to their bulletproof vest as "a fashionable safety measure in response to actual attacks and received death threats."