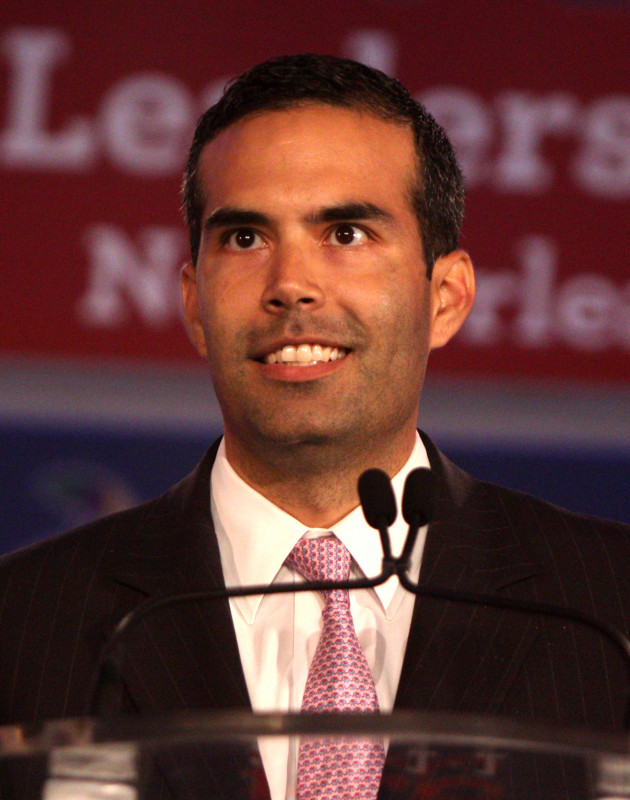 George Prescott Bush (born April 24, 1976) is an American politician and attorney serving as the commissioner of the Texas General Land Office since 2015.

In December 1994, Bush was arrested at his former girlfriend's home after attempting to break in and later driving his car through the front yard. The victims declined to press charges. He graduated from Rice University with a Bachelor of Arts in history in 1998. He attended University of Texas School of Law from 2000 until 2003, graduating with a Juris Doctor degree.

From August 1998 until June 1999, Bush taught social studies at a public high school in Homestead, Florida.

He was featured in People's 100 most eligible bachelors in 2000.

When asked in 2003 about whether he planned to run for office himself, Bush replied that his grandmother, Barbara Bush, had advised that anyone thinking about entering politics should distinguish himself in some other field first: "Make a name for yourself, have a family, marry someone great, have some kids, buy a house, pay taxes, and do the things everyone also does instead of just running out and saying, 'Hey, I'm the nephew of or the son of or the grandson of...'"

Bush clerked for U.S. District Judge for the Northern District of Texas, Sidney A. Fitzwater, from September 2003 until 2004. From 2004 to 2007 he practiced corporate and securities law with Akin, Gump, Strauss, Hauer & Feld LLP in Dallas. In 2005, Bush was selected as one of Texas Monthly's "Rising Stars" for his work with Akin Gump.

Bush told Politico that attending the October 2006 launch of the USS George H.W. Bush (named for his grandfather who was a naval aviator during World War II) inspired him to join the United States Navy. He also called the death of Pat Tillman, the National Football League player and Army Ranger who was killed in a friendly fire incident in Afghanistan in 2004, "a wake-up call".

He has expressed his opinion on some issues. In August 2004, during a trip to Mexico sponsored by the group Republicans Abroad, he called Venezuelan President Hugo Chávez a dictator and criticized the U.S. Border Patrol's use of guns which fire plastic pellets packed with chili powder. Bush was quoted as telling Mexican media, "If there has been American approval for this policy, that is reprehensible. It's kind of barbarous." He attributed the gun usage to "some local INS guy who's trying to be tough, act macho", although it is an agency policy.

Bush married a law school classmate, Amanda L. Williams, on August 7, 2004, in Kennebunkport, Maine, at the Walker's Point Estate. Williams is a media law attorney at the firm Jackson Walker LLP in Fort Worth, Texas. The couple has two sons.

Bush was the national co-chair of Maverick PAC, a national political action committee dedicated to engaging the next generation of Republican voters. Bush served as a member of several diplomacy missions, including one to Nicaragua for the second peaceful transfer of power in that country, and one to Brazil for the Pan American Games in 2007. He also joined two US Congressional delegations, one to Saudi Arabia during the Arab Spring of 2011 and one to Turkey in 2012 at the time of the civil war in neighboring Syria.

In March 2007, the United States Navy Reserve selected Bush for training as an intelligence officer through the direct commission officer program, a Navy initiative whereby applicants in specialized civilian fields forgo the typical prerequisites of a commission, such as the Naval Academy, NROTC or OCS, and—instead—attend the Direct Commissioned Officer Indoctrination Course (DCOIC), a three-week course on subjects such as naval history, customs and courtesies, followed by online classes. He was commissioned as a Navy Reserve Officer in May 2007. Bush served in Afghanistan for eight months from June 2010 to February 2011. During the deployment, he was given a different name for security purposes. Bush left the U.S. Navy Reserve in May 2017 as a lieutenant.

In 2009, Bush criticized Florida Governor Charlie Crist for accepting money from the 2009 stimulus package, calling for a return to fiscal conservatism. In January 2010, he endorsed Marco Rubio, Crist's opponent for the United States Senate.

From 2007 to 2012, Bush was a partner at Pennybacker Capital, LLC, a real estate private equity firm in Austin, Texas. The firm was originally named N3 Capital and headquartered in Fort Worth. In 2012, he founded St. Augustine Partners, an energy and technology-focused investment firm in Fort Worth.

In September 2012, Bush announced his intention to run for office, saying that he was considering one of several state offices. Two months later he filed papers required to run for state office in Texas. The same month, his father, Jeb Bush, emailed donors requesting that they support him in his 2014 bid for Texas Land Commissioner.

In January 2013, Bush filed a campaign finance report stating he had received about $1.3 million in campaign contributions. In March 2013, Bush filed to run for Texas Land Commissioner. The main role of the Land Office is negotiating and enforcing leases for mineral rights on millions of acres of land owned by the State of Texas.

In 2015, the GLO under Bush took control of the Alamo, a historic site in San Antonio, ending the state's partnership with the Daughters of the Republic of Texas (DRT), which had managed the site for decades. In firing DRT as managers of the Alamo, Bush alleged that the group had violated its contract. Bush locked the DRT out of the Daughters of the Republic of Texas Library, and the GLO claimed ownership over the Library's collections and artifacts. DRT sued, and the suit was settled in 2016, with Bush and the GLO relinquishing their claims and agreeing to pay the DRT $200,000 in legal fees. Bush oversaw a $450-million remodel of the Alamo and the plaza around it. In 2015, Bush spoke at a fundraising event for the Alamo Endowment, which took over management of the site in conjunction with the GLO. English singer Phil Collins donated various Alamo-related artifacts to the State of Texas, with the stipulation that the State of Texas build a facility to hold the artifacts within a seven-year period. The Texas state legislature made a one-time infusion of $25 million to Bush's GLO to redevelop the Alamo site, and the city of San Antonio agreed to provide $1 million for the redevelopment.

In 2016, the League of United Latin American Citizens Council No. 12 in Laredo gave Bush and Mexican official José Antonio Meade Kuribreña the titles of Señor Internacional, an honor given to distinguished figures in the border region.

In 2016, the office began a multi-year study on the flood effects of the Houston area and Texas coast.

As of January 2017 , Bush had about $3.1 million in campaign cash for his re-election campaign. He won the March 6, 2018, Republican primary with nearly 58 percent of the vote, defeating three other candidates including Jerry E. Patterson, the previous land commissioner. In the general election, Bush received 53.68 percent of the vote to Democratic candidate Miguel Suazo's 43.19 percent and Libertarian Matt Pina's 3.1 percent.

In 2020 and 2021, Bush said he was considering running for Texas attorney general in 2022 against incumbent Ken Paxton, a Republican plagued by scandal. On June 2, 2021, Bush officially announced his candidacy.

In June 2020, amid reports that George W. Bush and Jeb Bush would not support Trump's re-election, George P. Bush announced his full support for Trump, saying "Trump is the only thing standing between America and socialism."

In 2021, Bush supported the ouster of Liz Cheney from her position as chair of the House Republican Conference in Congress.

In February 2021, Texas experienced a humanitarian crisis after widespread power outages were caused by the infrastructure not being weatherized. Although 90 percent of the power plants that failed were fueled by fossil and nuclear fuels, Bush attacked wind and solar energy: "If the last few days have proven anything, it’s that we need oil & gas. Relying solely on renewable energy would be catastrophic."

In June 2021, Bush entered the race for Texas Attorney General with a campaign video that praises Donald Trump and does not mention his father, grandfather, or great-grandfather. Trump then endorsed Bush's opponent, Ken Paxton.