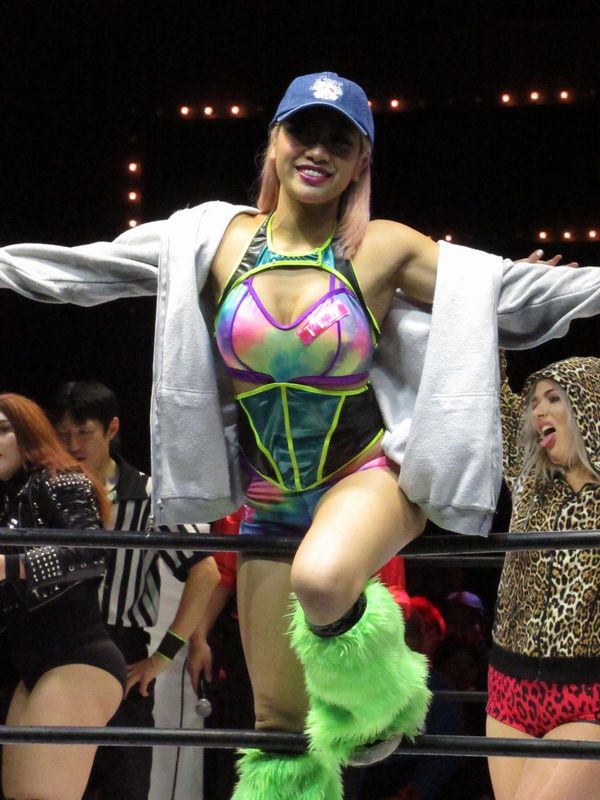 Prior to her professional wrestling career, Kimura won the DDT Ironman Heavymetalweight Championship one time on August 21, 2005, at a live event in Tokyo, then lost the title to her mother Kyoko.

After graduating the Wrestle-1 training academy, she debuted for the promotion on March 30, 2016, against classmate Reika Saiki in a losing effort. The pair wrestled against each other many times throughout 2016 in Wrestle-1.

On August 7, 2016, Kimura wrestled against her mother in a match. On September 18, 2016, Kimura captured her first title, the JWP Junior Championship, by defeating Yako Fujigasaki in a tournament final. Around this time, Kimura also began appearing in World Wonder Ring Stardom. On October 2, 2016, Kimura teamed with her mother and Kagetsu to capture the Artist of Stardom Championship. The team vacated the titles on January 3, 2017, when Kimura was injured. One week prior, Kimura also lost her JWP Junior Championship on December 28, 2016, to Yako Fujigasaki. Kimura eventually became a member of Stardom's heel stable, Oedo Tai. On January 22, 2017, her mother retired. At Kyoko's retired show, Kimura defeated her mother in a singles match and on the same show, the two teamed in a trios match in a winning effort.

During 2017, Kimura split her time between Wrestle-1, Sendai Girls' Pro Wrestling and Stardom while being a contracted performer for Wrestle-1. On June 21, 2017, at Stardom's Galaxy Stars 2017 event, Kimura teamed with her fellow Oedo Tai member, Kagetsu, to win the Goddess of Stardom Championship by defeating Team Jungle of Hiroyo Matsumoto and Jungle Kyona. The team held the titles for nearly a year, successfully defending against teams such as Jungle Kyona and HZK, Io Shirai and Viper, Jungle Kyona and Natsuko Tora, HZK and Momo Watanabe, Mayu Iwatani and Tam Nakano. The team was defeated by Mayu Iwatani and Saki Kashima in 2018.

Kimura officially became a Wrestle-1 roster member on January 9, 2018. She made an international tour in early 2018, competing for Ring of Honor, Pro-Wrestling: EVE, and various promotions in Mexico. Kimura left Oedo Tai on September 24, after she attacked Kagetsu.

She officially joined Stardom on March 25, 2019. On April 6, Kimura, along with Stella Grey and Sumie Sakai wrestled Jenny Rose and Oedo Tai (Kagetsu and Hazuki) in a dark match at Ring of Honor and New Japan Pro-Wrestling’s G1 Supercard. On April 14, at the 2019 Stardom draft, Hana was named leader of the International Army faction. The faction was renamed, "Tokyo Cyber Squad", on April 21. On May 16, Kimura, along with her stablemates Jungle Kyona and Konami won the Artist of Stardom Championship after defeating Mayu Iwatani, Saki Kashima, and Tam Nakano.

Kimura joined Terrace House in September 2019, appearing on the show until her death. In early January, Kimura was involved in an incident with housemate Kai Edward Kobayashi regarding her Wrestle Kingdom 14 ring attire. Kobayashi washed his clothes while Kimura's outfit was also in the washer; he then threw it in the dryer, ruining her wrestling attire. Kimura was visibly upset, knocking his hat off his head and leading to verbal conflict. After the episode aired in March, her actions drew criticism, name calling and abuse from social media users, sending her into depression.

On January 4, 2020, Kimura, along with Giulia wrestled Mayu Iwatani and Arisa Hoshiki wrestled in a dark match at New Japan Pro-Wrestling's Wrestle Kingdom 14. It was the first women's match at the Tokyo Dome since 2002. Kimura had her final match on March 24 at Stardom's Cinderella Tournament 2020, wrestling Mayu Iwatani in the first round to a draw.

Following a series of suicidal tweets in which Kimura addressed online criticism directed at her from Terrace House viewers, she was found dead in her apartment in Tokyo on May 23, 2020, of a suspected suicide. The release of new Terrace House episodes was suspended as a result of Kimura's death, and Fuji TV later cancelled the season.