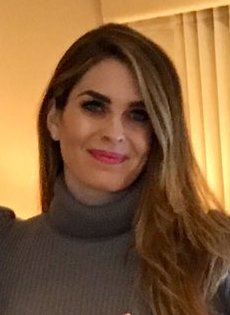 Hope Charlotte Hicks (born October 21, 1988) is an American public relations consultant who in February 2020 was named counselor to President Donald Trump. Hicks previously served as White House communications director from August 2017 until March 29, 2018. From January to September 2017, she was White House director of strategic communications.

Hicks was a teenage model, appearing in Greenwich magazine in 2002. She then posed for a Ralph Lauren campaign with her older sister Mary Grace, and was the face of the Hourglass Adventures novels about a time-traveling 10-year-old. She was the cover model for The It Girl (2005), the first novel in the series by Cecily von Ziegesar.

Hicks attended Greenwich High School, where she was co-captain of the lacrosse team, and graduated in 2006. She then attended Southern Methodist University, where she majored in English and played on a club lacrosse program she helped start. She graduated in 2010.

Hicks started in public relations with the New York City firm Zeno Group. She began working for public relations firm Hiltzik Strategies in 2012, after meeting the firm's founder at a Super Bowl event, and worked there for Donald Trump's daughter Ivanka Trump, on her fashion line, and then on other Trump ventures.

In August 2014, Hicks joined the Trump Organization full-time. She worked for Ivanka Trump inside Trump Tower, helping expand her fashion label (the Ivanka Trump Collection) and modeling for her online store. In October 2014, she began working directly for Donald Trump.

In January 2015, Donald Trump chose Hicks, who was 26 years old at the time, for the role of press secretary for his potential presidential campaign. Trump summoned her to his office and, as she tells it, "Mr. Trump looked at me and said, 'I'm thinking about running for president, and you're going to be my press secretary.'" Until that time, she had never worked in politics or volunteered on a campaign. After Trump's first primary victories, Hicks was asked to choose between staying with the Trump Organization or working on the campaign full-time. She initially decided to leave the campaign, but Trump convinced her to remain and she stayed on as press secretary.

On December 22, 2016, it was announced that Hicks would become part of the Trump Administration, in the newly created position of the White House director of strategic communications. In January 2017, Hicks was included on the Forbes 30 Under 30 list, having "served as a one-woman press team for Trump's historic presidential campaign".

She was dating Rob Porter in 2018 when he resigned as White House staff secretary after abuse allegations from his two ex-wives were made public.

On February 27, 2018, Hicks gave nine hours of closed-door testimony to the House Intelligence Committee. She acknowledged that she sometimes had to tell "white lies" in her work as communications director, but refused to answer any questions about her tenure in the White House. The next day the White House confirmed to The New York Times that Hicks planned to resign. According to "multiple sources", she had been planning to resign for months, and her announcement was unrelated to the events of the preceding 24 hours. She officially resigned on March 29, 2018.

On March 4, 2019, the House Judiciary Committee sent a letter to Hicks requesting information regarding alleged obstruction of justice by the current administration. (She was mentioned over 180 times in Robert Mueller's report on Russian election interference and possible obstruction of justice; the report was released on April 18, 2019. ) The Committee subpoenaed documents and her testimony on May 21, 2019. On June 4, 2019, the Trump White House invoked executive privilege, directing Hicks to not provide any documents related to her employment in the Trump administration. She agreed to testify in a closed-door session on June 19, 2019, during which lawyers for the Trump administration forbade Hicks from answering questions 155 times, claiming that due to "absolute immunity", Hicks "may not speak about anything that occurred during the time of her employment in the White House as a close adviser to the President". Hicks testified on the scheduled date, and also complied with the White House request to not answer questions. On July 18, 2019, un-redacted search warrant documents from the Michael Cohen criminal case were released and it appeared a strong possibility that Hicks had known about hush payments made by Michael Cohen on behalf of Donald Trump before the dates she had previously claimed.

In February 2020, it was announced that Hicks would return to the White House Office as an aide to Jared Kushner and counselor to President Donald Trump. She officially started back at the White House on March 9.