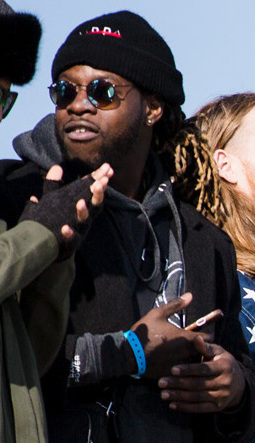 Ajayi attended and played college football for Boise State from 2011 to 2014. He was redshirted as a true freshman at Boise State University in 2011. In October 2011, he was arrested for shoplifting after stealing a pair of sweatpants at a local Walmart and was later sentenced to five days in jail. As a redshirt freshman in 2012, he played in 11 games. He had 82 rushes for 548 yards and four touchdowns, including 118 yards and a touchdown on just six carries against New Mexico in his second career game. As a sophomore in 2013, he started 12 of 13 games and rushed for 100+ yards in six of them, including 24 carries for 222 yards and three touchdowns in game seven against Nevada. He ended the season having carried the ball 249 times for 1,425 yards and 18 touchdowns. As a junior in 2014, he became the first Boise State player to rush for 100+ yards in 10 games in a season, including two 200+ yard performances against Colorado State and Utah State. He ended his season with a 134-yard, three touchdown performance in the Broncos' 38–30 victory over the Arizona Wildcats in the 2014 Fiesta Bowl. He finished the season ranked fifth in the nation with a school-record 1,823 rushing yards and second nationally only to Wisconsin's Melvin Gordon with 28 rushing touchdowns (also a school record). Ajayi finished his final season at Boise State having accounted for 41.3% of the team's total yards and touchdowns, third among running back prospects entering the 2015 NFL Draft, trailing only Melvin Gordon and Indiana's Tevin Coleman. He was named a first-team All-Mountain West Conference selection for the second consecutive season and earned third-team All-American honors by the Associated Press.

On December 21, 2014, Ajayi announced that he would forgo his senior season and enter the 2015 NFL Draft. He finished his collegiate career with 678 rushes for 3,796 yards and 50 rushing touchdowns, which ranked third, third, and tied for second on the Boise State career lists. He is the only player in Boise State history with three games of 200+ yards rushing.

Ajayi was drafted in the fifth round of the 2015 NFL Draft with the 149th overall pick by the Miami Dolphins (traded from the Minnesota Vikings in exchange for Mike Wallace). He was the 14th of 22 running backs selected in that year's draft. On May 7, 2015, the Dolphins signed him to a four-year, $2.50 million rookie contract, which included a signing bonus of $220,813.

On September 6, 2015, Ajayi was placed on injured reserve/designated to return due to broken ribs he suffered in the Dolphins' last exhibition game. On November 8, 2015, he made his NFL debut against the Buffalo Bills and rushed five times for 41 yards (8.2 average). He scored his first professional touchdown against the San Diego Chargers in a 30-14 defeat. He finished his rookie season with 49 carries for 187 yards (3.8 average) and one touchdown. He also recorded seven receptions for 90 yards.

Ajayi followed up a Week 6 204-yard and two touchdown performance against the Pittsburgh Steelers with a 214-yard and one touchdown effort against AFC East rival Buffalo in Week 7, becoming only the fourth player in NFL history along with O. J. Simpson (twice), Earl Campbell, and former Miami Dolphin Ricky Williams to rush for over two hundred yards in two consecutive games. Ajayi was named AFC Offensive Player of the Week two weeks in a row for his 200+ rushing yards in back-to-back games in Weeks 6 and 7. In Week 16, on Christmas Eve, Ajayi recorded a third 200-yard game, again at the expense of the Buffalo Bills, including a 57-yard rush to set Andrew Franks up to kick a game-winning field goal in overtime. With his 32 carries for 206 yards and a touchdown, he became only the fourth player in NFL history to rush over 200 yards in three games in a single season, and the only player to do it as early as his second season. As a result of his Week 16 performance, he became one of only 15 players in NFL history with three or more career 200+ yard rushing games. In the 30-12 loss to the Pittsburgh Steelers in the Wild Card Round of the playoffs, he had 16 carries for 33 yards in his playoff debut. As a result of his successful season in 2016, he was named to the AFC roster for the 2017 Pro Bowl. In the Pro Bowl, he had seven rushes for 18 yards. He was ranked 69th on the NFL Top 100 Players of 2017 list by his fellow players.

On October 31, 2017, Ajayi was traded to the Philadelphia Eagles for a 2018 fourth round draft pick. In Ajayi's debut with the Eagles, he rushed for 77 yards on eight carries and one touchdown in a 51–23 rout of the Denver Broncos five days after being traded, his longest being a 48 yard rush for a touchdown. In week 11 Ajayi rushed for 91 yards on 7 carries against the Dallas Cowboys, helping his team increase their record to 9-1. In the game he had a career high 71 yard rush in the third quarter. The Eagles made the playoffs as the #1-seed in the NFC. In the Divisional Round against the Atlanta Falcons, he had 54 rushing yards and 44 receiving yards in the 15–10 victory. In the NFC Championship against the Minnesota Vikings, he finished with 73 rushing yards and 26 receiving yards in the 38–7 victory. During Super Bowl LII against the New England Patriots, Ajayi rushed for 57 rushing yards as the Eagles won 41-33, giving them their first Super Bowl win in franchise history.

In the 2018 season opener against the Atlanta Falcons, Ajayi recorded his second career multi-touchdown game. He had 15 carries for 62 rushing yards and two rushing touchdowns, with the second being the late go-ahead touchdown, in the 18–12 victory. On October 8, 2018, Ajayi was placed on injured reserve after suffering a torn ACL during Week 5 against the Minnesota Vikings. He finished the season with 184 rushing yards and three touchdowns.

Ajayi re-signed with the Eagles on November 15, 2019 after they placed running back Darren Sproles on injured reserve. On December 23, he was released by the Eagles.

On January 7, 2020, Ajayi was signed by Major League Soccer's Philadelphia Union as the club's esports player in eMLS League Series One.