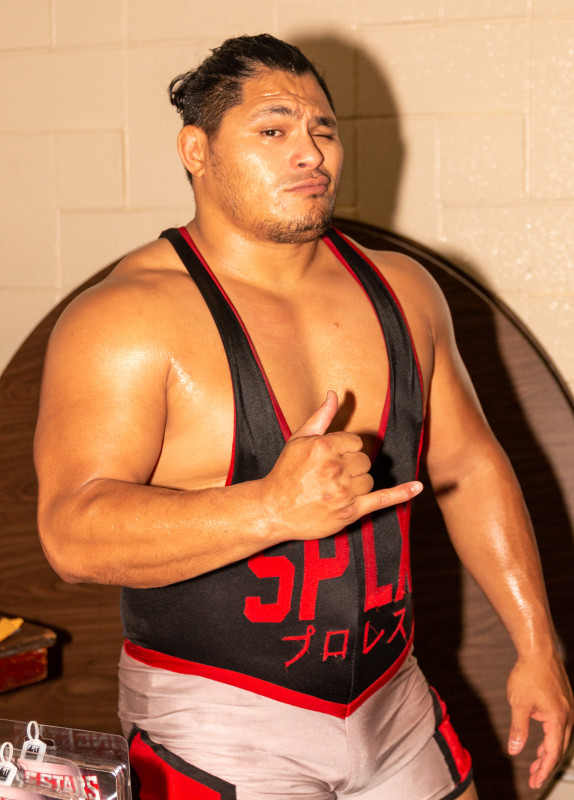 Jeffrey Cobb (born July 11, 1982) is an American professional wrestler of Filipino descent. He is known for his appearances with promotions including All Elite Wrestling, New Japan Pro-Wrestling, Ring of Honor, Lucha Underground, and Pro Wrestling Guerrilla (PWG). He is a former PWG World Champion and is also the winner of PWG's 2018 Battle of Los Angeles tournament and a former one-time World Tag Team Champion with Matt Riddle (as The Chosen Bros).

As an amateur wrestler, Cobb represented Guam at the 2004 Summer Olympics, where he became the nation's flag bearer in the opening ceremony and competed in the men's light heavyweight freestyle category. He transitioned to professional wrestling in 2009.

Cobb began professional wrestling in 2009 working for Action Zone Wrestling in Hawaii. He won the AZW Heavyweight Title a record setting three times. He made appearances for many independent promotions in Northern California such as All Pro Wrestling, Supreme Pro Wrestling, Pro Wrestling Bushido, Phoenix Pro Wrestling and PREMIER Wrestling; where he held their heavyweight championship for 427 days. In September 2014, he received a tryout at the WWE Performance Center.

On May 20, 2016, Cobb made his debut for Pro Wrestling Guerrilla (PWG), losing to Chris Hero. On September 2, Cobb entered the 2016 Battle of Los Angeles, from which he was eliminated in the first round by Ricochet. On December 16, 2016, Cobb and Matthew Riddle defeated The Young Bucks. Cobb and Riddle were later known in PWG as "The Chosen Bros." On February 18, 2017, Cobb and Riddle would defeat the Unbreakable F'n Machines (Brian Cage and Michael Elgin). On March 18, 2017, the team would beat OI4K (Dave Crist and Jake Crist). On April 21, 2017, Cobb, in singles action, would defeat Keith Lee. On May 19, 2017, The Chosen Bros defeated reDRagon (Kyle O'Reilly and Bobby Fish). On October 20, The Chosen Bros defeated the Lucha Brothers (Rey Fenix and Penta el Zero M) to win the PWG World Tag Team Championship. They retained the titles until April 20, 2018, when they lost them against The Rascalz (Zachary Wentz and Dezmond Xavier). On September 15–16, 2018, he went on to win the 2018 Battle of Los Angeles, beating Darby Allin in the first round, Rey Horus in the second round, Trevor Lee in the third round, and Shingo Takagi and Bandido in the final.

On May 27, 2017, Cobb made his Progress Wrestling debut by defeating Nathan Cruz in the first round of the Super Strong Style 16 Tournament 2017. The following day, Cobb lost his second round match to Matthew Riddle. On May 29, Cobb received his first shot at the Progress World Championship, losing to Pete Dunne.

On November 6, 2017, Cobb was announced as a participant in New Japan Pro-Wrestling's 2017 World Tag League, where he would team with Michael Elgin. Cobb and Elgin did not get along behind the scenes with Elgin making disparaging remarks about his tag team partner in private messages that were made public while the tournament was still in progress. The two finished the tournament on December 9 with a record of four wins and three losses, failing to advance to the finals.

His character was killed off in the fourth season, which aired in 2018. Despite this, it was reported in April 2019 that Cobb was seeking legal action to be released from his Lucha Underground contract. This came after similar motions from others on the show, including King Cuerno and Joey Ryan. More days later, it would be confirmed that he had been released from the company.

On July 21, 2018, Cobb made his Ring of Honor debut by attacking Eli Isom and FR Josie at a television taping. At Death Before Dishonor XVI on September 28, Cobb confronted Punishment Martinez following his defense of the ROH World Television Championship. At a television taping the following night, Cobb, in his first official match, defeated Martinez to win the ROH World Television Championship. Cobb then would win both of his matches during the two-day Glory By Honor XVI event in October, all three of his matches during the Global Wars 2018 tour in November, and defeated Adam Page at Final Battle in December to round out the year.

On October 19, Cobb defeated Walter at Smokey and the Bandido to win the PWG World Championship. He then successfully defended it against Trevor Lee at Hand of Doom in January 2019.

On November 6, 2019, Jeff Cobb was announced to be in one of the teams in the 2019 World Tag League Tournament with tag partner Mikey Nicholls.

While working with Ring of Honor as a freelancer, Cobb made an apperance on All Elite Wrestling. On the February 12, 2020 episode of AEW Dynamite, Cobb made his debut attacking Jon Moxley alongside The Inner Circle after his match.