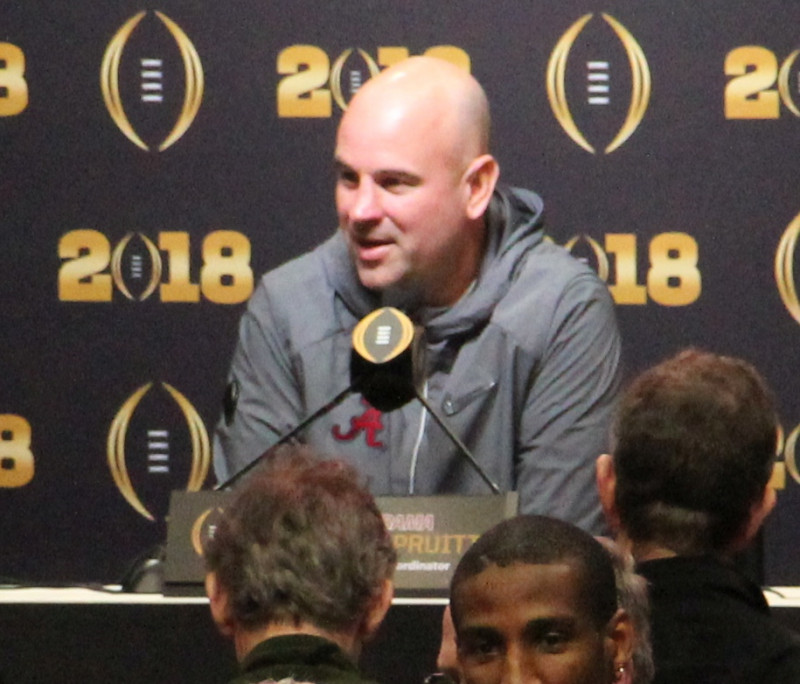 Jeremy Pruitt (born May 28, 1974) is an American football coach. He most recently served as the head coach at the University of Tennessee from 2018 to 2021. He also previously served as the defensive coordinator at the University of Alabama from 2016 to 2017, University of Georgia from 2014 to 2015, and Florida State University in 2013. As a defensive coordinator, Pruitt's defenses frequently ranked in the top ten nationally in total defense and related categories. Pruitt worked for Alabama as Director of Player Development (2007–2009) before becoming the Crimson Tide's defensive backs coach in 2010. Prior to joining the college ranks, he served as an assistant coach at the high school level. Pruitt was a 2013 finalist for the Broyles Award, given annually to the nation's top college football assistant coach, and was again a finalist in 2016. He played college football at Middle Tennessee and Alabama.

Pruitt began coaching as a student assistant on the 1997 Alabama team, where he worked primarily under defensive backs coach Curley Hallman. He then worked as an assistant coach under his father at Plainview High School (1998 and 2000) and Fort Payne (2001–2003). He coached defensive backs in 1999 at West Alabama, where he earned his degree. He served as an assistant coach under Rush Propst at Hoover High School from 2004 to 2006, winning state championships in 2004 and 2005. While at Hoover, he appeared on the first season of the MTV reality television show, Two-A-Days, which aired in the fall of 2006 and focused on the lives of students at Hoover.

Pruitt appeared on the TV series Two-A-Days in 2006 while an assistant coach at Hoover High School in Hoover, Alabama.

In 2007, Pruitt joined the Alabama coaching staff as Director of Player Development. Following Alabama's 2009 national championship season, Pruitt was named the Tide's defensive backs coach. During his first season in 2010, Alabama's secondary led the SEC in passing efficiency, and included one All-American, Mark Barron. The 2011 Alabama secondary led the nation in pass defense and passing efficiency, and included three All-Americans, Barron, Dre Kirkpatrick, and DeQuan Menzie. Both Barron and Kirkpatrick were drafted in the first round of the 2012 NFL Draft. Pruitt's 2012 secondary ranked seventh nationally in pass defense, and included Jim Thorpe finalist Dee Milliner. He was named National Recruiter of the Year in 2012 by 247Sports.

In 2013, Pruitt was hired as the defensive coordinator at Florida State. In his lone season with the Seminoles, his defense ranked number one in scoring defense, allowing just 12.1 points per game, and ranked third in total defense, helping the 2013 Seminoles win the national championship.

In 2014, Pruitt joined the Georgia coaching staff as the defensive coordinator. His 2014 defensive unit finished 17th nationally in total defense, and finished in the top ten in turnover margin and passing yards allowed. Pruitt's 2015 unit at Georgia finished the season ranked seventh nationally in total defense, and led the nation in fewest passing yards allowed per game.

Pruitt returned to Alabama as defensive coordinator in 2016, replacing Kirby Smart, who had left to become the head coach at Georgia. His 2016 defensive unit led the nation in scoring defense and rushing defense, and was ranked second in total defense. His 2017 Alabama defensive unit finished the regular season ranked second in total defense and first in scoring defense. The unit was part of the team that won the National Championship in the 2017 season.

In December 2017, Pruitt was hired as the head coach at the University of Tennessee, capping a tumultuous coaching search that followed the firing of head coach Butch Jones, and led to the replacement of athletic director John Currie by Hall of Fame coach Phillip Fulmer. On September 1, 2018, he made his Tennessee head coaching debut in the Belk College Kickoff against the #17 West Virginia Mountaineers. The Volunteers lost by a score of 40–14. The next week, against ETSU, Pruitt won his first game as head coach. The Vols defeated the Buccaneers by a score of 59–3 in Pruitt's Neyland Stadium debut. On October 13, 2018, against #21 Auburn, Pruitt coached the Volunteers to their first victory over a SEC West team since 2010. On November 10, he helped lead the Volunteers to a 24–7 victory over the #12 Kentucky Wildcats. Overall, in his first season as the Volunteers' head coach, Pruitt finished with a 5–7 overall record, 2–6 record in SEC play.

Though the Volunteers entered the 2020 season ranked No. 16 in the preseason rankings, they finished 3–7, including a home loss to Kentucky for the first time in 36 years. After the 2020 season, on January 18, 2021, Pruitt was fired after an internal investigation found evidence of recruiting violations. Nine other coaches and staff were also fired.