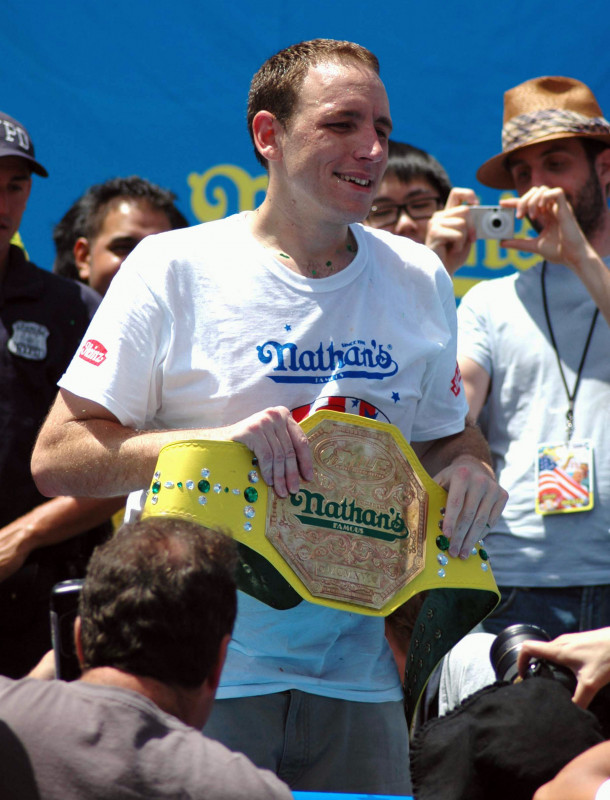 Joseph Christian Chestnut (born November 25, 1983) is an American competitive eater. He is currently ranked first in the world by Major League Eating. He is a Vallejo, California native and resides in San Jose, California. Chestnut's height is 6’1” (1.85 m); his weight is 230 pounds (104 kg).

Chestnut, a San Jose State University student, entered the competitive eating scene in 2005 with a break-out performance in the deep-fried asparagus eating championship, in which he beat high-ranked eater Rich LeFevre by eating 6.3 pounds of asparagus in 11.5 minutes. That same year, during Nathan's Hot Dog Eating Contest, he ate 32 HDB, placing third behind Takeru Kobayashi and Sonya Thomas.

On 23 August 2008, Chestnut defeated IFOCE's second highest-ranked competitive eater Pat "Deep Dish" Bertoletti in the second Gyoza Eating Championship in Little Tokyo, Los Angeles, California. He devoured 231 gyoza, setting a new world record; he beat his previous record of 212, set at the inaugural event in 2006 when he narrowly defeated Sonya "Black Widow" Thomas (210). Thomas did not attend the 2008 event due to budgetary and travel costs.

In 2007, Chestnut won the Wing Bowl XV, an annual Philadelphia event at the Wachovia Center. In this competition, he ate 182 chicken wings in 30 minutes, becoming a Wing Bowl champion and record holder.

On July 4, 2007, Chestnut and Kobayashi battled the field in a record-setting hot dog eating battle in Coney Island in Brooklyn, New York, at Nathan's Hot Dog Eating Contest. Chestnut knocked off Kobayashi 66–63, leading to the latter's first defeat in the contest in six years.

On July 4, 2007, Chestnut won the 92nd Annual Nathan's Hot Dog Eating Contest, beating six-time defending champion Takeru "Tsunami" Kobayashi by consuming 66 hot dogs and buns (HDB) in 12 minutes, which improved the world record. The following year, he successfully defended his title by winning a 5 hot dog eat-off after tying Kobayashi in consuming 59 HDB in 10 minutes. On July 4, 2009, Chestnut beat Kobayashi again, by consuming a world record 68 HDB and winning his third consecutive title. On July 4, 2010, Chestnut took home his 4th consecutive Mustard Belt eating 54 HDB. The 2010 contest was a runaway victory, as Kobayashi did not compete due to a contract dispute with Major League Eating. On July 4, 2011, he won his fifth-consecutive championship with 62 HDB. 2012 marked his sixth consecutive win, when Chestnut tied his own world record from 2009 by devouring 68 HDB. In 2013, Chestnut captured his seventh straight title, eating a total of 69 HDB, breaking his previous world record. In 2014, Chestnut captured his eighth straight title eating a total of 61 HDB.

On October 28, 2007, between 2:33 and 2:41, Chestnut ate 103 Krystal burgers in the Krystal Square Off World Hamburger Eating Championship in Chattanooga, Tennessee. This was Chestnut's personal best, and is the new world record.

Chestnut set two new world records in 2008. On February 1, he ate 241 wings in 30 minutes at the Wing Bowl XVI in Philadelphia. This record was broken by Takeru Kobayashi at the Wing Bowl XX in 2011 with 337 wings.

On March 24, 2008, Chestnut set a new male record at The Big Texan Steak Ranch restaurant in Amarillo, Texas by eating a meal of 4.5 lb (2.04 kg) ribeye steak, salad, baked potato, shrimp cocktail, and roll in just 8 minutes and 52 seconds. Shortly afterwards, on his show on KKLA, previous record holder Frank Pastore congratulated Chestnut. (The overall human record is 4 minutes and 18 seconds, set by Molly Schuyler on April 19, 2015, on her first of three meals.)

On June 21, 2008, Chestnut lost to Takeru Kobayashi in a Pizza Hut P'Zone competition at Sony Studios in Culver City, California. The competition aired on Spike TV on June 21.

On July 4, 2008, Chestnut tied Takeru Kobayashi in the annual Nathan's Hot Dog Contest after eating 59 HDB in 10 minutes. The tie resulted in a 5 HDB eat-off, which Chestnut won by consuming all 5 HDBs before Kobayashi. The 59 is a new record in the competition based on the reduction from 12 minutes to 10 minutes. Chestnut weighed in at 102 kilograms (225 pounds).

On July 28, 2008, Chestnut lost to Takeru Kobayashi in Chicken Satay eating in the MLE Asia inaugural event. He consumed just over 4 kilograms to Kobayashi's almost 5.5.

On October 12, 2008, he consumed 45 slices of pizza, winning the "Famous Famiglia World Pizza Eating Championship", which was held in Times Square in New York. This was beaten by Bertoletti with 47 slices a few weeks later.

On February 21, 2009, Chestnut consumed 10 and a half pounds of macaroni and cheese in seven minutes during halftime at the San Jose Stealth lacrosse game, beating out his contestants and adding another world record to his name.

On May 9, 2010, Chestnut won Shrimp Wontons eating in Singapore. Chestnut ate 380 wontons in 8 minutes to set a new world record.

On July 4, 2010, Chestnut secured his fourth straight Nathan's Hotdog Eating Contest, by consuming 54 HDB in what he described himself as a disappointing performance.

On September 25, 2010, at the Phantom Gourmet Food Fest in Boston, Massachusetts, Chestnut won the Upper Crust Pizza Eating competition by eating 37 slices in 10 minutes. He beat Bob Shoudt by 1 slice.

On July 4, 2011, Chestnut secured his fifth straight Nathan's Hotdog Eating Contest, by consuming 62 HDB. Kobayashi, who could not participate in the contest because of his refusal to sign the required contract, ate 69 HDB at an off-site event with independent judges to establish a new world record.

Chestnut trains by fasting and by stretching his stomach with milk, water and protein supplements. Since the start of his competitive eating career, his competition weight has varied from 225–240 pounds (102–109 kg). After winning his sixth consecutive hot dog eating contest in 2012 by eating 68 hot dogs, he stated, "I will not stop until I reach 70. This sport isn't about eating. It's about drive and dedication, and at the end of the day, hot dog eating challenges both my body and my mind."

On July 4, 2012, Chestnut successfully defended his title at Nathan's 97th Annual Hot Dog Eating Contest at Coney Island in Brooklyn, New York. He tied his own world record by swallowing 68 HDB in 10 minutes, which earned him his 6th "mustard belt" for this competition.

On August 27, 2012, Chestnut cursed at Hofmann Hot dog and Kobayashi, stating in a Twitter post, "Congrats to @FReeKobio704 for eating a bunch of nasty Hoffman crap dogs. He needed an ego boost after 3 years of dodging competition."

On July 4, 2013, Chestnut successfully defended his title at Nathan's 98th Annual Hot Dog Eating Contest at Coney Island in Brooklyn, New York. He beat his own world record of 68 by consuming 69 HDB in 10 minutes, which earned him his 7th Mustard Belt for this competition.

On July 25, 2013, Chestnut ate 179 wings in 10 minutes taking the title for the second year in a row at the Hooters World Wing-Eating Championship held in Clearwater, Florida.

On July 4, 2014, Chestnut ate more hot dogs and buns than any of his opponents, narrowly defeating competitor Matt Stonie. He successfully ate 61 hot dogs and buns to Stonie's 56, making this his eighth consecutive win. Prior to the event, Chestnut proposed to his longtime girlfriend, Neslie Ricasa.

Chestnut lost the 2015 Nathan's Hot Dog Eating Contest to Matt Stonie. On July 4, 2016, Chestnut regained the championship belt from Stonie by eating 70 hot dogs; 3.5 hot dogs short of his record-setting qualifying round. A year later on July 4, 2017, he raised the bar again by raising his record to 72 hot dogs; and again the following year to a world record of 74. In 2019, he secured a twelfth title with 71 HDB, but failed to beat his previous record. In 2020, he consumed 75 HDB, a world record for the contest.

On July 4, 2016, Chestnut redeemed himself with 70 hot dogs and buns with Stonie behind with 53 hot dogs and buns. On September 4, 2016, he won his third consecutive title at the United States Chicken Wing Eating Championships in Buffalo, New York by eating 188 wings in 12 minutes.

On July 4, 2017, Chestnut defended his title and ate 72 hot dogs and buns. This was his 10th title and once again set a new Nathan's Hot Dog Eating Contest record. Carmen Cincotti was the closest competitor with 60.

In 2018, Chestnut competed in The Amazing Race 30 alongside fellow competitive eater Tim Janus. On July 4, Chestnut won his 11th title at Nathan's Hot Dog Eating Contest with a new record of 74 hot dogs and buns.

In 2020, Chestnut ate a 9-pound pizza in about 32 minutes in a MrBeast YouTube video.

Chestnut proposed to his longtime girlfriend Neslie Ricasa just before defending his title in the 2014 Nathan's competition. The couple split up in early 2015, prior to their scheduled wedding date.