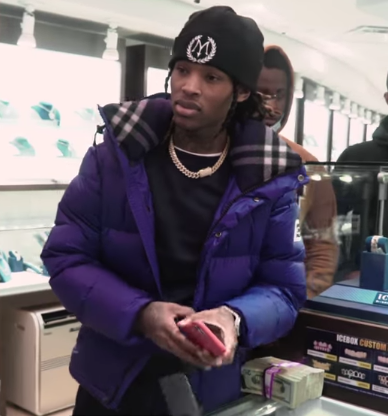 Bennett was born on August 9, 1994, in Chicago, Illinois. He had six half siblings from his father and three siblings from his mother, Taesha, who he was raised by. His father, Walter E. Bennett, known as Ada Park Silk, was in and out of his life due to his incarcerations. He was shot and killed when Von was 11. Von would pay tribute to his father in multiple songs, notably in the song "Exposing Me".

Dayvon Daquan Bennett (August 9, 1994 – November 6, 2020), known professionally as King Von, was an American rapper from Chicago. He was signed to Lil Durk's record label Only the Family and Empire Distribution.

At age 16, Von went to jail for the first time. This would only be the start of a long course of legal troubles for him. In 2014, he was accused of a shooting that killed one and wounded another. Von was eventually acquitted after a trial by jury. Subsequently, King Von took to rapping, collaborating with Lil Durk.

On November 21, 2012, Bennett was arrested and booked into Cook County jail for unlawful possession of a firearm.

On July 24, 2014, Von was arrested in connection with a shooting in May 2014, resulting in the death of Malcolm Stuckey and the injury of two other men. Von was charged with 1 count of murder and 2 counts of attempted murder. The shooting took place at 5700 South Lasalle Street in Englewood, Chicago. After witnesses failed to testify, in 2017, all charges were dropped.

After fellow rapper Lil Durk signed King Von to his Only the Family label, Von released his single "Crazy Story" on December 6, 2018, and it became his breakout single.

In June 2019, King Von and Lil Durk were arrested in connection with a shooting in Atlanta. Von, along with his co-defendant Durk, appeared before a judge in a Fulton County courtroom for a probable cause hearing. Prosecutors claimed the two men robbed and shot a man outside a popular Atlanta drive-in on February 5, 2019. After weeks in jail, the two rappers were released on $250,000 & $300,000 bonds, respectively.

On January 10, 2020, Detroit rapper Sada Baby's single "Pressin" was released featuring King Von. On February 21, 2020, Von released "Took Her to the O", which went on to become one of his most popular songs. It was included on his mixtape, Levon James, released on March 6, 2020, which peaked at number 63 on the Billboard 200. The album features verses from NLE Choppa, Tee Grizzley, G Herbo, Lil Durk, and YNW Melly, among others. On April 29, 2020, King Von released his single "Grandson for President", which did well in popularity. He followed that up with a music video release for "Broke Opps", a song from Levon James. He then released another single, titled "Why He Told" on July 27, 2020, and followed that up with another popular single, "All These Niggas", featuring Chicago rapper Lil Durk, which garnered over 21 million views on YouTube. He then released another single, titled "How It Go", on August 26, 2020.

On October 9, 2020, King Von released "I Am What I Am", featuring New York rapper Fivio Foreign. This release was in anticipation of his debut studio album Welcome to O'Block, released on October 30, 2020. The 16-track album features production Chopsquad DJ, Tay Keith, Wheezy and Hitmaka, among others. The album includes the Polo G collaboration "The Code", which was released with a music video. On December 24, 2020, Lil Durk released his album The Voice as a tribute to King Von who also appears on the album cover and on the song, "Still Trappin'".

On November 6, 2020, at around 2:15 am, Bennett was involved in an altercation with Quando Rondo in an Atlanta nightclub. The dispute quickly escalated into gunfire, in which Bennett was shot multiple times. He was subsequently transported to a hospital in critical condition and died there later that day; he was 26 years old. The Georgia Bureau of Investigation reported that three people were killed. Four people were wounded; one of them was placed in police custody for the murder of King Von while being treated for a gunshot wound. The suspect was identified as Timothy Leeks, known as Lul Timm, aged 22. On November 14, 2020, King Von was buried in his hometown of Chicago.