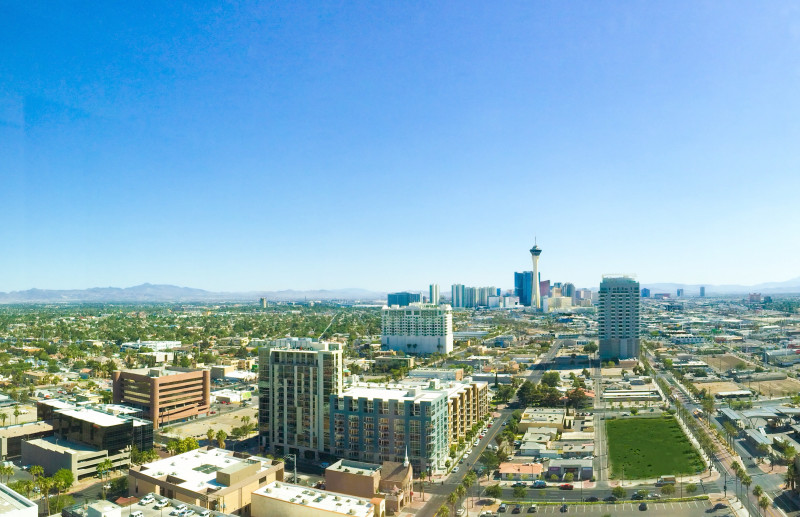 A young Mexican scout named Rafael Rivera is credited as the first non-Native American to encounter the valley, in 1829. Trader Antonio Armijo led a 60-man party along the Spanish Trail to Los Angeles, California in 1829. In 1844, John C. Frémont arrived, and his writings helped lure pioneers to the area. Downtown Las Vegas's Fremont Street is named after him.

Las Vegas was founded as a city in 1905, when 110 acres (45 ha) of land adjacent to the Union Pacific Railroad tracks were auctioned in what would become the downtown area. In 1911, Las Vegas was incorporated as a city.

Las Vegas was settled in 1905 and officially incorporated in 1911. At the close of the 20th century, it was the most populated North American city founded within that century (a similar distinction was earned by Chicago in the 19th century). Population growth has accelerated since the 1960s, and between 1990 and 2000 the population nearly doubled, increasing by 85.2%. Rapid growth has continued into the 21st century, and according to the United States Census Bureau, the city had 641,903 residents in 2020, with a metropolitan population of 2,227,053.

The Golden Gate Hotel and Casino, located downtown along the Fremont Street Experience, is the oldest continuously operating hotel and casino in Las Vegas; it opened in 1906 as the Hotel Nevada.

Most of the annual precipitation falls during the winter months. February, the wettest month, averages only four days of measurable rain. The mountains immediately surrounding the Las Vegas Valley accumulate snow every winter, but significant accumulation within the city is rare, although moderate accumulations occur every few years. The most recent accumulations occurred on February 18, 2019, when parts of the city received about 1 to 2 inches (2.5 to 5.1 cm) of snow and on February 20 when the city received almost 0.5 inches (1.3 cm). Other recent significant snow accumulations occurred on December 25, 2015, and December 17, 2008. Unofficially, Las Vegas's largest snowfall on record was the 12 inches (30 cm) that fell in 1909. In recent times, ice days have not occurred, although 29 °F (−2 °C) was measured in 1963. On average the coldest day is 44 °F (7 °C).

In 1931, the Northern Club (now the La Bayou) opened. The most notable of the early casinos may have been Binion's Horseshoe (now Binion's Gambling Hall and Hotel) while it was run by Benny Binion.

1931 was a pivotal year for Las Vegas. At that time, Nevada legalized casino gambling and reduced residency requirements for divorce to six weeks. This year also witnessed the beginning of construction on nearby Hoover Dam. The influx of construction workers and their families helped Las Vegas avoid economic calamity during the Great Depression. The construction work was completed in 1935.

In 1951, nuclear weapons testing began at the Nevada Test Site, 65 miles (105 km) northwest of Las Vegas. During this time, the city was nicknamed the "Atomic City". Residents and visitors were able to witness the mushroom clouds (and were exposed to the fallout) until 1963 when the Partial Nuclear Test Ban Treaty required that nuclear tests be moved underground.

In 1955, the Moulin Rouge Hotel opened and became the first racially integrated casino-hotel in Las Vegas.

The iconic "Welcome to Las Vegas" sign, which has never been located within municipal limits, was created in 1959 by Betty Willis.

When The Mirage opened in 1989, it started a trend of major resort development on the Las Vegas Strip outside of the city. This resulted in a drop in tourism in the downtown area, but many recent projects have increased the number of visitors to downtown.

In 1995, the Fremont Street Experience opened in Las Vegas's downtown area. This canopied five-block area features 12.5 million LED lights and 550,000 watts of sound from dusk until midnight during shows held at the top of each hour.

The Fremont Street Experience was built in an effort to draw tourists back to the area and has been popular since its startup in 1995.

The city purchased 61 acres (25 ha) of property from the Union Pacific Railroad in 1995 with the goal of creating a better draw for more people to the downtown area. In 2004, Las Vegas Mayor Oscar Goodman announced plans for Symphony Park, which could include a mixture of offerings, such as residential space and office buildings.

A number of new industries have moved to Las Vegas in recent decades. Online shoe retailer Zappos.com (now an Amazon subsidiary) was founded in San Francisco but by 2013 had moved its headquarters to downtown Las Vegas. Allegiant Air, a low-cost air carrier, launched in 1997 with its first hub at Harry Reid International Airport and headquarters in nearby Summerlin.

RTC Transit is a public transportation system providing bus service throughout Las Vegas, Henderson, North Las Vegas and other areas of the valley. Inter-city bus service to and from Las Vegas is provided by Greyhound, BoltBus, Orange Belt Stages, Tufesa, and several smaller carriers. Amtrak trains have not served Las Vegas since the service via the Desert Wind at Las Vegas station ceased in 1997, but Amtrak California operates Thruway Motorcoach dedicated service between the city and its passenger rail stations in Bakersfield, California, as well as Los Angeles Union Station via Barstow.

On land across from Symphony Park, the World Market Center Las Vegas opened in 2005. It currently encompasses three large buildings with a total of 5.1 million square feet. Trade shows for the furniture and furnishing industries are held there semiannually.

Within the city, there are many lawns, trees and other greenery. Due to water resource issues, there has been a movement to encourage xeriscapes. Another part of conservation efforts is scheduled watering days for residential landscaping. A U.S. Environmental Protection Agency grant in 2008 funded a program that analyzed and forecast growth and environmental impacts through 2019.

In March 2010, the RTC launched bus rapid transit link in Las Vegas called the Strip & Downtown Express with limited stops and frequent service that connects downtown Las Vegas, the Strip and the Las Vegas Convention Center. Shortly after the launch, the RTC dropped the ACE name.

A growing population means the Las Vegas Valley used 1.2 billion US gallons (4.5×10  L) more water in 2014 than in 2011. Although water conservation efforts implemented in the wake of a 2002 drought have had some success, local water consumption remains 30 percent more than in Los Angeles, and over three times that of San Francisco metropolitan area residents. The Southern Nevada Water Authority is building a $1.4 billion tunnel and pumping station to bring water from Lake Mead, has purchased water rights throughout Nevada, and has planned a controversial $3.2 billion pipeline across half the state. By law, the Las Vegas Water Service District "may deny any request for a water commitment or request for a water connection if the District has an inadequate supply of water." However, limiting growth on the basis of an inadequate water supply has been unpopular with the casino and building industries.

In 2016, 77.1 percent of working Las Vegas residents (those living in the city, but not necessarily working in the city) commuted by driving alone. About 11 percent commuted via carpool, 3.9 percent used public transportation, and 1.4 percent walked. About 2.3 percent of Las Vegas commuters used all other forms of transportation, including taxi, bicycle, and motorcycle. About 4.3% of working Las Vegas residents worked at home. In 2015, 10.2 percent of city of Las Vegas households were without a car, which increased slightly to 10.5 percent in 2016. The national average was 8.7 percent in 2016. Las Vegas averaged 1.63 cars per household in 2016, compared to a national average of 1.8 per household.

Also located nearby is the Las Vegas North Premium Outlets. With a second expansion, completed in May 2015, the mall currently offers 175 stores.

The Las Vegas Valley is the home of three major professional teams: the National Hockey League (NHL)'s Vegas Golden Knights, an expansion team that began play in the 2017–18 NHL season at T-Mobile Arena in nearby Paradise, the National Football League (NFL)'s Las Vegas Raiders, who relocated from Oakland, California in 2020 and play at Allegiant Stadium in Paradise, and the Women's National Basketball Association (WNBA)'s Las Vegas Aces, who play at the Mandalay Bay Events Center.