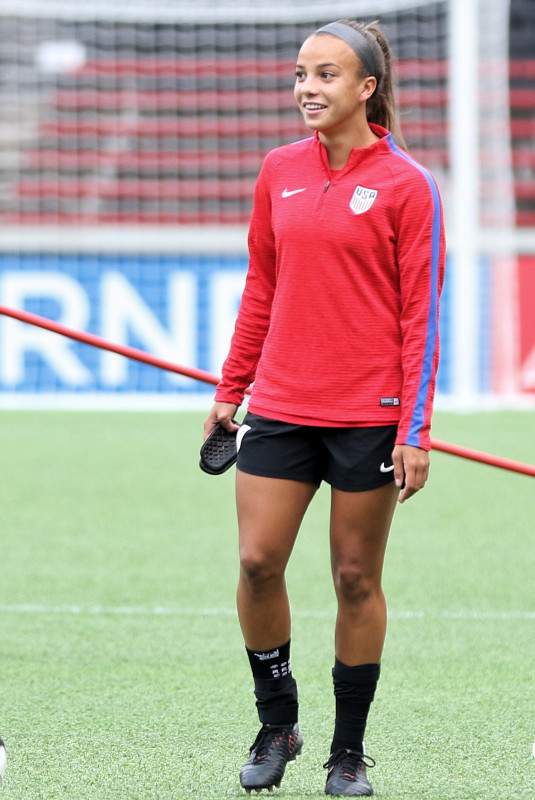 Mallory Diane Pugh (born April 29, 1998) is an American soccer player for Sky Blue FC of the National Women's Soccer League (NWSL), the highest division of women's professional soccer in the United States, and the United States women's national soccer team. In January 2016, she became the youngest female player to be selected and play for the U.S. national team during an Olympic qualifying tournament.

Following a successful run with the U-20 women's national team, Pugh was called up to the senior national team for the first training camp of 2016 from January 5 to 21 leading up to a match against Ireland. At age 17, she was one of the youngest field players to be called up to the team in 15 years. On January 23, 2016, Pugh earned her first cap for the team during the match against Ireland, coming in for Alex Morgan in the 58th minute. She was the youngest player to debut for the national team since Heather O'Reilly's debut in 2002. She then became the 19th United States player to score in her debut when she scored her first international goal in the 83rd minute to secure the United States' 5–0 win.

Born in Littleton, Colorado to Karen and Horace Pugh, Mallory was raised with her older sister Brianna in Highlands Ranch, Colorado. Her mother was a long-distance runner and her father ran track and played football. Growing up, Pugh considered her older sister Brianna as a role model and cites her as a reason she got started in soccer. She started playing soccer at the age of four and then followed in her sister's footsteps and played club soccer with Real Colorado in the Elite Clubs National League. She played on the competitive team with the club at the U-11 through U-18 levels; although she started playing recreational soccer at the U-5 level. During her last two years with the team, she often trained with the club's Boys Development Academy team. Pugh helped Real Colorado win state titles in 2010 and 2011. In addition, the team made it to the Elite Clubs National League finals in both 2013 and 2014. At the U-16 level, Real Colorado won state and regional titles and became runner-up at nationals. Pugh was named the MVP of the regional tournament that year.

In 2013, Pugh attended a U–15 national team training camp from February 24 to March 2 at the Olympic Training Center in Chula Vista, California. She then moved up to the U–17 national team and traveled to San José, Costa Rica for an international tournament in late April. Following the tournament, Pugh joined the U–17 team for a training camp from June 9 to 16. In preparation for the 2013 CONCACAF Women's U–17 Championship, Pugh attended another U–17 training camp from July 21 to 31 in Columbus, Ohio as well as a camp in Lakewood Ranch, Florida from September 15 to 22.

In late September 2013, Pugh was named to the roster for the 2013 CONCACAF U–17 Women's Championship held in Jamaica from October 30 to November 9. Before heading to Jamaica, the team trained together once again in Lakewood Ranch for seven days. During the tournament, Pugh was a key player and leading scorer with five goals and three assists. In the semifinal match against Mexico on November 7, the United States fell in penalties after a 1–1 tie in regulation. With a third-place finish in the tournament, the United States did not qualify to the 2014 FIFA U–17 Women's World Cup.

In November 2015, Pugh was named to the roster for the 2015 CONCACAF Women's U–20 Championship in December. Pugh was the most experienced player on the roster and also captained the team. In the first match against Mexico on December 4, Pugh scored on a penalty kick in the 20th minute. The United States qualified for the 2016 FIFA U-20 Women's World Cup after defeating Honduras in the semifinal on December 11. Pugh helped the team win the tournament with a 1–0 win over Canada on December 13. Following the tournament, Pugh was awarded the Golden Boot for most goals scored and the Golden Ball for best player of the tournament. On December 18, Pugh was named the 2015 U.S. Soccer Young Female Player of the Year.

In January 2016, it was reported that Pugh had rejected college in order to turn professional and play for National Women's Soccer League club Portland Thorns FC when she finished high school. Later that week, her father said the reports were false and that Pugh would join the UCLA soccer team as originally planned. In July 2016, it was announced she delayed entrance to UCLA until January 2017, due to national team commitments for the Rio Olympics and the 2016 FIFA U–20 Women's World Cup. She appeared in three non-competitive Spring scrimmages in early 2017 before departing UCLA to pursue a professional career prior to starting her freshman season.

On July 12, 2016, Pugh was named to the 18–player team that would represent the United States at the 2016 Olympic Games in Rio de Janeiro. She made her Olympic debut on August 3 in the team's opening group match against New Zealand. On August 9, Pugh came in for Megan Rapinoe in the 33rd minute of the team's final group match against Colombia. She scored in the 59th minute, becoming the youngest United States player to score a goal in the Olympics. She put the United States ahead 2–1 with her goal; however, the match ended in a 2–2 draw. In the quarterfinals, Pugh started in the match against Sweden on August 12. The game was tied 1–1 after regulation time and Pugh was replaced by Lindsey Horan in the 114th minute in extra time. The United States were then defeated by Sweden in penalty kicks.

On April 17, 2017, Pugh made the announcement that she would forego her college career with UCLA and turn professional. On May 13, 2017, it was announced that Mallory Pugh had signed to play with Washington Spirit after negotiations to get to Portland Thorns FC had failed.

After much speculation as to where she would go when she turned pro, Pugh officially joined the Washington Spirit of the NWSL on May 13, 2017. She made her professional debut for the Spirit on May 20, 2017 versus FC Kansas City. Pugh scored 6 goals in her rookie season and was named a finalist for NWSL Rookie of the Year.

Pugh was called up for the 2019 FIFA Women's World Cup and scored her first World Cup goal in the game against Thailand on June 11, 2019.