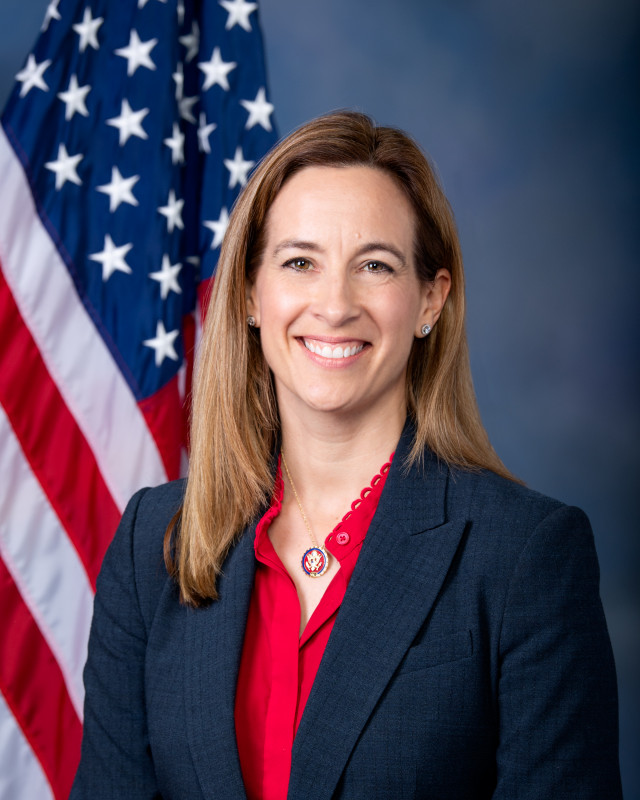 Rebecca Michelle "Mikie" Sherrill (/ˈmaɪki/; born January 19, 1972) is an American politician, former U.S. Navy helicopter pilot, attorney, and former federal prosecutor serving as the U.S. Representative for New Jersey's 11th congressional district since 2019. The district includes a swath of suburban and exurban areas west of New York City. A member of the Democratic Party, Sherrill was elected on November 6, 2018, defeating Republican Jay Webber. She was reelected in 2020 by a slightly narrower margin.

On November 6, Sherrill defeated Republican Jay Webber with 56.8% of the vote to Webber's 42.1%. The election marked the largest partisan vote share swing in the 2018 cycle, with a 33-percentage-point swing from a 19-point Republican margin in 2016 to a 15-point Democratic one in 2018. Sherrill is the first Democrat to win this seat since 16-term incumbent Joseph Minish was defeated in 1984 after the district had been redrawn to be more Republican. She was the first Democrat since Minish's defeat to win more than 40% of the district's vote. Sherrill is the only elected Democrat above the county level in much of the district's western portion—Frelinghuysen's former base. For example, in the district's share of Morris County, which accounts for most of its population, all but one state senator and two state assemblymen are Republicans.

Sherrill had a closer contest for reelection in 2020, defeating Republican Rosemary Becchi with 53 percent of the vote. She was likely helped by Joe Biden carrying the district with 53% of the vote, the first Democratic presidential candidate to do so since the district assumed its present configuration in 1984.

Inspired by her grandfather who served as a pilot in World War II, Sherrill wanted to be a pilot from a young age. She was among the flight school graduates in the first class of women eligible for combat. After graduation from the Naval Academy in 1994, Sherrill became a U.S. Navy H3 Sea King helicopter pilot and a Russian policy officer. Sherrill flew missions throughout Europe and in the Middle East. In 2000, she was based at Naval Air Station Corpus Christi.

Sherrill is a graduate of South Lakes High School in Reston, Virginia. In 1994, she earned her B.S. from the United States Naval Academy in Annapolis. In 2003, Sherrill received a M.Sc. in economic history from the London School of Economics. In 2004, she received a certificate in Arabic language from The American University in Cairo. In 2007, Sherrill earned a J.D. from Georgetown University Law Center.

After leaving Kirkland & Ellis, Sherrill joined the United States Attorneys' Office as an outreach and reentry coordinator. In 2015 Sherrill became an Assistant United States Attorney for the District of New Jersey, a federal prosecutor, working under U.S. Attorney Paul Fishman. She left that office in the spring of 2016. At the time, she planned on going into the field of criminal justice reform.

On May 11, 2017, Sherrill launched her campaign for New Jersey's 11th congressional district in the United States House of Representatives. The seat had been held by 12-term Republican incumbent Rodney Frelinghuysen, the chairman of the House Appropriations Committee, who in January 2018 announced he would not seek reelection. The district had long been considered a Republican stronghold, even after it had been made slightly more Democratic on paper by pushing it further into Essex County, including a slice of Montclair around Sherrill's home. Frelinghuysen had been reelected three more times from this redrawn district without serious difficulty, but was thought to be vulnerable after Donald Trump only carried it by a single point in 2016.

In November 2017, comedian Chelsea Handler, who is from Livingston, went to Montclair to show her support for Sherrill's campaign. Sherrill was endorsed by the political action committee organization VoteVets.org, the pro-choice Democratic PAC EMILY's List, the editorial board of The New York Times, and the New Jersey chapter of Clean Water Action.

In June 2018, Sherrill won the Democratic primary with 77% of the vote, beating social worker and entrepreneur Tamara Harris.

In 2019, Sherrill initially opposed exploring the first impeachment of President Donald Trump, but changed her mind in September after a whistle-blower alleged that Trump pressured Ukrainian President Volodymyr Zelensky to investigate Joe Biden. According to one report, Sherrill was instrumental in motivating House speaker Nancy Pelosi to proceed with the impeachment inquiry and said her "grave concerns" about Trump's behavior were "rooted in self-sacrifice and principle." An op-ed she co-wrote with six other freshman Democrats with national security backgrounds—Houlahan, Luria, Gil Cisneros, Jason Crow, Elissa Slotkin and Abigail Spanberger—said that "everything we do harks back to our oaths to defend the country" and described the claims against Trump as "a threat to all we have sworn to protect."

Sherrill indicated her support for a second impeachment of Trump after the January 6, 2021, storming of the Capitol. She said she had seen some colleagues giving what she called "reconnaissance tours" of the building the day before the storming.