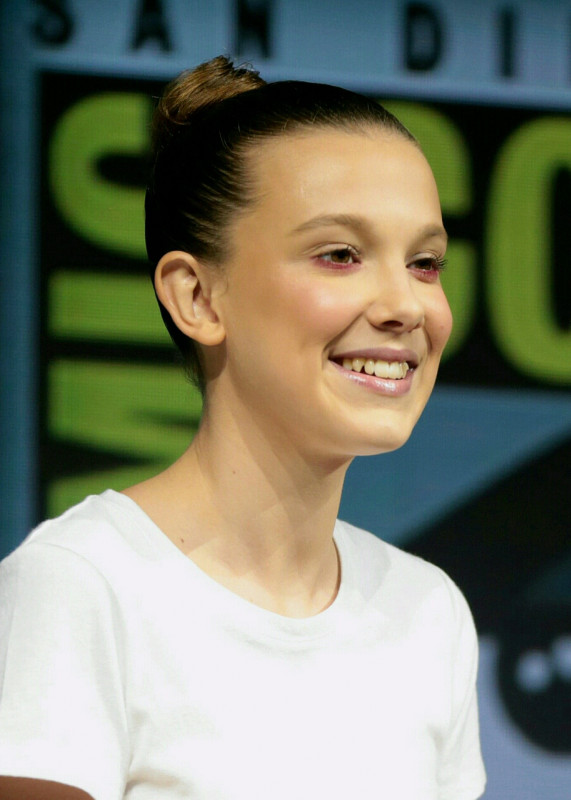 Brown was born in Marbella, Spain, on 19 February 2004, the third of four children born to English parents Kelly and Robert Brown. She was born with partial hearing loss in one ear, and gradually lost all hearing in that ear over several years. She moved with her family back to England when she was 4, settling in Bournemouth; when she was 8, the family moved to Orlando, Florida.

Millie Bobby Brown (born 19 February 2004) is an English actress who gained recognition for playing the character Eleven in the Netflix sci-fi drama series Stranger Things (2016–present), which earned her two Emmy Award nominations for Outstanding Supporting Actress in a Drama Series, and two Screen Actors Guild Award nominations for Outstanding Performance by a Female Actor in a Drama Series. She is one of the youngest nominees for the award.

In 2013, Brown made her acting debut as a guest star in the ABC fantasy drama series Once Upon a Time in Wonderland, a spin-off of Once Upon a Time, portraying the role of Young Alice. In 2014, she had a starring role in the BBC America paranormal drama-thriller series Intruders as Madison O'Donnell. She made guest appearances in the CBS police procedural drama NCIS, the ABC sitcom Modern Family, and the ABC medical drama series Grey's Anatomy.

In November 2016, Brown starred in the music video for Sigma and Birdy's single "Find Me". Since November 2016, she has appeared in commercial advertisements for Citigroup. In January 2017, she made her modelling debut in Calvin Klein's "By Appointment" campaign. The following month, she was signed to the agency IMG Models. Brown appeared in the campaign of the Italian brand Moncler in the summer of 2018.

In 2018, Brown was featured in the Time 100 list of the world's most influential people, and was appointed as a UNICEF Goodwill Ambassador, the then youngest person selected for this position.

In January 2018, Brown was cast to star in and produce the film adaptation of The Enola Holmes Mysteries. She was also chosen to voice in Darren Aronofsky's virtual reality experience Spheres: Songs of Spacetime. On 20 April 2018, she was named one of the 100 most influential people in the world by Time magazine, becoming the youngest person to be included in the list. In addition she was named by Time magazine as one of the most influential teens of 2017 and of 2018. On 20 November 2018, it was announced that she had become the youngest person ever to be appointed a UNICEF Goodwill Ambassador. In November 2018, EA Games announced that Brown collaborated with The Sims 4 programmers to feature in the Sims 4 Positivity Challenge. In 2018, The Hollywood Reporter ranked Brown as among Hollywood's top thirty stars under age eighteen.

Brown made her feature film debut in 2019, in Godzilla: King of the Monsters, the sequel to the 2014 film Godzilla. She reprised her role in the next sequel, Godzilla vs. Kong (2021). In March 2019, she became the ambassador of UEFA's Together #WePlayStrong campaign. That same month, it was announced Brown will be starring in the film adaptation of The Thing About Jellyfish by Ali Benjamin as Suzy. In 2019, Brown launched "Florence by Mills", her own beauty product line. It is available at UK pharmacy Boots, and has recently become available in Canada through Shoppers Drug Mart.

On 28 July 2020, it was announced that she would star in and produce through her PCMA Productions a suspense film titled The Girls I've Been, based on the novel of the same name by Tess Sharpe. Brown will also star and executive produce the fantasy film Damsel for Netflix, under the direction of Spanish filmmaker Juan Carlos Fresnadillo based on a screenplay by Dan Mazeau. In December 2020, it was announced that the Russo brothers will direct an adaptation of Simon Stålenhag's graphic novel The Electric State for Universal Pictures with Brown set to star as the lead. That December, it was reported that Netflix offered her a first look deal that included multiple projects. On 13 May 2021, it was announced that she would reprise her role as Enola Holmes in the sequel Enola Holmes 2.