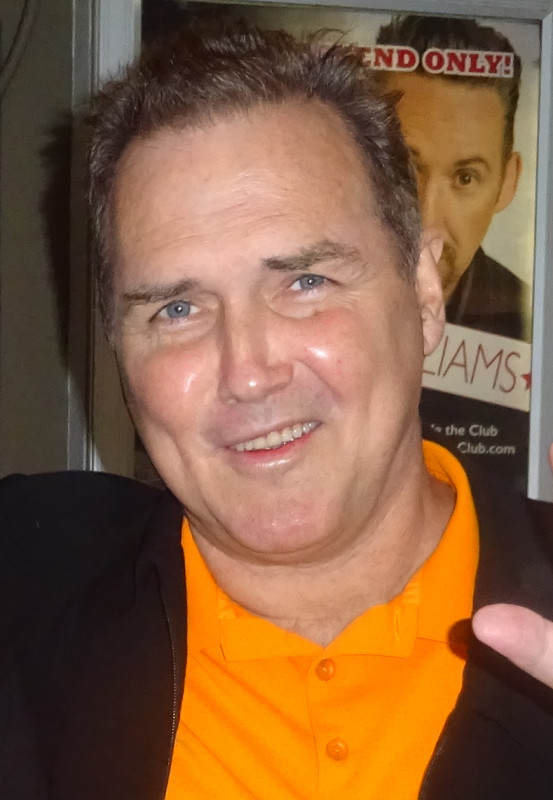 Macdonald was born Norman Gene Macdonald on October 17, 1959, and raised in Quebec City. His parents, Ferne (née Mains) and Percy Lloyd Macdonald (1916–1990), were both teachers. They worked at CFB Valcartier, a military base north of Quebec City. Macdonald's father died in 1990 of heart disease.

Norman Gene Macdonald (October 17, 1959 – September 14, 2021) was a Canadian stand-up comedian, writer, and actor who was known for his deadpan style and poetic, sometimes old-fashioned turns of phrase. Throughout his career, he appeared in numerous films and was a regular favorite comedian panelist of talk show hosts, with many considering him to be the ultimate late night comedy guest.

Macdonald's first performances in comedy were at stand-up clubs in Ottawa, regularly appearing on amateur nights at Yuk Yuk's in 1985. Following an appearance at the 1986 Just For Laughs Comedy Festival in Montreal, he was heralded by the Montreal Gazette as, "[o]ne of this country's hottest comics." By 1990, he would perform as a contestant on Star Search. He was hired as a writer for the Roseanne television sitcom for the 1992–93 season before quitting to join Saturday Night Live.

Early in his career, Macdonald's first work in television included writing for such comedies as Roseanne and The Dennis Miller Show. In 1993, Macdonald was hired as a writer and cast member on Saturday Night Live (SNL), spending a total of five seasons on the series, which included anchoring the show's Weekend Update segment for three and a half seasons. After being fired from SNL, he wrote and starred in the 1998 film Dirty Work and headlined his own sitcom The Norm Show from 1999 to 2001. Macdonald was also a voice actor, best known for providing voice roles in Mike Tyson Mysteries, The Orville, and the Dr. Dolittle films.

In early 1998, Don Ohlmeyer, president of NBC's West Coast division, had Macdonald removed as Weekend Update anchor, citing a decline in ratings and a drop-off in quality. He was replaced by Colin Quinn at the Weekend Update desk beginning on the January 10, 1998 episode.

Macdonald remained on SNL as a cast member, but disliked performing in regular sketches. On February 28, 1998, in one of his last appearances on SNL, he played the host of a fictitious TV series titled Who's More Grizzled? who asked questions from "mountain men," played by that night's host Garth Brooks and special guest Robert Duvall. In the sketch, Brooks' character says to Macdonald's character, "I don't much care for you," to which Macdonald replies, "A lot of people don't." He was dismissed shortly thereafter.

In 1999, Macdonald starred in The Norm Show (later renamed Norm), co-starring Laurie Metcalf, Artie Lange, and Ian Gomez. It ran for three seasons on ABC. Earlier in 1999, he made a cameo appearance in the Andy Kaufman biographical drama Man on the Moon, directed by Milos Forman. When Michael Richards refused to portray himself in the scene reenacting the famous Fridays incident in which Kaufman threw water in his face, Macdonald stepped in to play Richards, although he was not referred to by name. Macdonald also appeared in Forman's previous film The People vs. Larry Flynt (1996) as a reporter summoned to Flynt's mansion regarding secret tapes involving automaker John DeLorean.

Macdonald returned to Saturday Night Live to host the October 23, 1999 show. In his opening monologue, he expressed resentment at being fired from Weekend Update, then concluded that the only reason he was asked to host was because "the show has gotten really bad" since he left, echoing a perennial criticism of the show.

In 2000, Macdonald played the starring role for the second time in a motion picture alongside Dave Chappelle, Screwed, which fared poorly at the box office. He continued to make appearances on television shows and in films. Also in 2000, Macdonald made his first appearance on Family Guy, as the voice of Death. That role was later recast to Adam Carolla. On November 12, 2000, he appeared on the Celebrity Edition of Who Wants to Be a Millionaire?, winning $500,000 for Paul Newman's Hole in the Wall Charity Camp, but could have won the million if he ignored Regis.

In 2003, Macdonald played the title character in the Fox sitcom A Minute with Stan Hooper, which was cancelled after six episodes. In 2005, Macdonald signed a deal with Comedy Central to create the sketch comedy Back to Norm, which debuted that May. The pilot, whose cold opening parodied the suicide of Budd Dwyer, starred Rob Schneider and never turned into a series. Later in 2005, Macdonald voiced a genie named Norm on two episodes of the cartoon series The Fairly OddParents, but could not return for the third episode, "Fairy Idol", owing to a scheduling conflict.

In 2006, Macdonald again performed as a voice actor, this time in a series of commercials for the Canadian mobile-services provider Bell Mobility, as the voice of Frank the Beaver. The campaign was extended through 2008 to promote offerings from other Bell Canada divisions such as the Internet provider Bell Sympatico and the satellite service Bell Satellite TV. In September 2006, Macdonald's sketch comedy album Ridiculous was released by Comedy Central Records. It features appearances by Will Ferrell, Jon Lovitz, Tim Meadows, Molly Shannon, and Artie Lange. On the comedy website Super Deluxe, he created an animated series entitled The Fake News. Macdonald filled in during Dennis Miller's weekly "Miller Time" segment on O'Reilly Factor, and guest-hosted Miller's radio show, on which he was briefly a weekly contributor.

He said his past gambling addiction had been initiated by a six-figure win at a craps table in Atlantic City. In an appearance on the WTF with Marc Maron podcast in 2011, Macdonald revealed that he lost all of his money gambling three times, and the largest amount he lost at once was $400,000. It was reported by The Times of London that he went bankrupt twice. As a poker player, his best live result was cashing for $20,915 in the $1,000 Bellagio Weekly Tournament, in July 2006. In the 2007 World Series of Poker, he came in 20th place out of 827 entrants in the $3,000 No-Limit Texas Hold 'em event, winning $14,608. He also frequently played live cash games as well as online poker. Macdonald stated in a 2018 interview that, prior to the ruling in United States v. Scheinberg, he would play up to 20 online limit hold'em games at once. "Since they went offline, it kind of saved my life. Because I was just grinding out and couldn't even sleep."

Macdonald was a guest character on My Name Is Earl in the episode "Two Balls, Two Strikes" (2007) as Lil Chubby, the son of "Chubby" (played by Burt Reynolds), similar to Macdonald's portrayals of Reynolds on SNL. On June 19, 2008, Macdonald was a celebrity panellist on two episodes of a revived version of the game show Match Game. On August 17, 2008, Macdonald was a participant in the Comedy Central Roast of Bob Saget, performing intentionally cheesy and G-rated material that contrasted greatly with the raunchy performances of the other roasters. In AT&T commercials around Christmas 2007 and 2008, Macdonald voiced a gingerbread boy in a commercial for AT&T's GoPhone.

In 2009, Macdonald and Sam Simon pitched a fake reality show to FX called The Norm Macdonald Reality Show where Macdonald would play a fictional, down-on-his-luck version of himself. The show was picked up and Garry Shandling was added to the cast, but it was cancelled halfway through filming. On the May 16, 2009, episode of Saturday Night Live, Macdonald reappeared as Burt Reynolds on Celebrity Jeopardy!, and in another sketch. On May 31, 2009, he appeared on Million Dollar Password.

Macdonald became a frequent guest on The Tonight Show with Conan O'Brien during its 2009 and 2010 run. He made frequent appearances on the Internet talk show Tom Green's House Tonight, and on May 20, 2010, was guest host.

In September 2010, Macdonald was developing a series for Comedy Central that he described as a sports version of The Daily Show. Sports Show with Norm Macdonald premiered April 12, 2011. Nine ordered episodes were broadcast. Macdonald's first stand-up special, Me Doing Stand-Up, aired on Comedy Central on March 26, 2011. On February 26, 2011, he became a commentator and co-host (with Kara Scott) of the seventh season of the TV series High Stakes Poker on Game Show Network.

Between 2013 and 2018, Macdonald hosted the talk shows Norm Macdonald Live (a video podcast) and Norm Macdonald Has a Show (a Netflix series), on which he interviewed comedians and other celebrities. In 2016, he authored Based on a True Story, a novel that presented a heavily fictionalized account of his life. In 2021, Macdonald died of leukemia, with which he was diagnosed in 2012 and had not publicly disclosed.

Early in 2012, it was reported that Macdonald was developing a talk show for TBS titled Norm Macdonald is Trending, which would see Macdonald and a team of correspondents covering headlines from pop culture and social media. Clips for the unaired pilot published by The Washington Post resemble a sketch comedy show in the vein of Back to Norm.

In June 2012, he became the spokesperson for Safe Auto Insurance Company. Along with television and radio commercials, web banners, and outdoor boards, the effort included a series of made-for-web videos. As part of the campaign, the state minimum auto insurance company introduced a new tagline, "Drive Safe, Spend Less."

In 2013, Macdonald premiered the podcast Norm Macdonald Live, co-hosted by Adam Eget, streaming live weekly on Video Podcast Network and posted later on YouTube. It received positive notices from USA Today, Entertainment Weekly, and the "America's Comedy" website while the Independent Film Channel stated that while Macdonald remained "a comedy force to be reckoned with", and "did not quite disappoint," the show was "a bit rough around the edges." The second season of Norm Macdonald Live began in May 2014 and the third began in September 2016.

In 2014, Macdonald unsuccessfully campaigned on Twitter to be named the new host of The Late Late Show after then-host Craig Ferguson announced he would be leaving. On May 15, 2015, Macdonald was the final stand-up act on the Late Show with David Letterman: during his set, which ended with him breaking into tears as he told Letterman that he truly loved him, Macdonald included a joke Letterman had told the first time Macdonald had ever seen him during a 1970s appearance on the Canadian talk show 90 Minutes Live, where a 13-year-old Macdonald had been in the studio audience. Also in 2015, Macdonald was a judge for the ninth season of NBC's Last Comic Standing, joining the previous season's judges, Roseanne Barr and Keenan Ivory Wayans and replacing fellow Canadian Russell Peters from 2014.

In August 2015, he succeeded Darrell Hammond as Colonel Sanders in TV commercials for the KFC chain of fast food restaurants. Macdonald was replaced by Jim Gaffigan in the role by February 2016.

In 2017, Macdonald became co-owner of the Salt Lake Screaming Eagles, a professional football team of the Indoor Football League.

Starting in May 2017, Macdonald started to move his comedy to a more reserved, deadpan style. On stage he has claimed to have "no opinions" and the minimalist delivery has been described by The A.V. Club as "reduc[ing] gesture and verbiage down to an absurd minimum."

In March 2018, Netflix announced it had ordered ten episodes of a new talk show entitled Norm Macdonald Has a Show, hosted by Macdonald. The series premiered on September 14, 2018.

In September 2018, Macdonald sparked controversy after the publication of an interview in which he appeared to criticize aspects of the #MeToo movement and defend friends and fellow comedians Louis C.K. and Roseanne Barr. Macdonald's scheduled appearance on NBC's Tonight Show Starring Jimmy Fallon was subsequently cancelled.

In February 2020, Macdonald launched Loko, a dating app he co-created which relies heavily on video to make first impressions.

On September 14, 2021, Macdonald died from acute leukemia at a hospital in Pasadena, California, at the age of 61. He had been diagnosed nine years prior, though he disclosed his diagnosis to only a few close friends and family members, fearing that revealing his condition to the public would "affect the way he was perceived", according to his brother Neil.