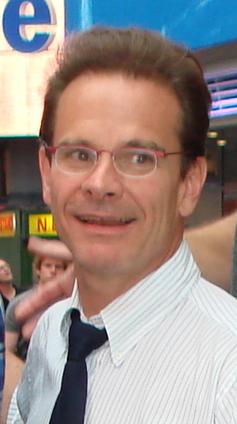 Peter Thomas Scolari (September 12, 1955 – October 22, 2021) was an American actor. He was best known for his roles as Michael Harris on Newhart (1984–1990) and Henry Desmond on Bosom Buddies (1980–1982). Scolari received three Emmy nominations for his work on Newhart and won the Primetime Emmy Award for Outstanding Guest Actor in a Comedy Series for his recurring role as Tad Horvath on Girls in 2016.

Scolari was born in New Rochelle, New York on September 12, 1955. He described his father as an abusive, "rageful man" and his mother as an alcoholic, and has said that their marriage was tumultuous. "They stayed together for the kids and also because they were hopelessly in love with each other, but they were totally incompatible," he said in an interview with the Toronto Star.

Scolari's first ongoing role was in the short-lived 1980 sitcom Goodtime Girls as the juggling neighbor of the title characters. He and Tom Hanks were then cast in another sitcom, Bosom Buddies, as men who disguise themselves as women to live in an affordable apartment in a women's-only residence. After Bosom Buddies was canceled in 1982, Scolari joined the cast of Newhart in 1984, in which he played Michael Harris, a yuppie local TV producer. Scolari stayed with the series until its conclusion in 1990.

In 1996, Scolari starred in a version of the stage musical Stop the World – I Want to Get Off, produced for the A&E television network.

Scolari was married to Debra Steagal, and later to actress Cathy Trien, with whom he had two children. He married his longtime girlfriend, actress Tracy Shayne, in June 2013.

Following central roles in the unsuccessful series Family Album and Dweebs, Scolari spent three seasons playing inventor Wayne Szalinski, a role originated on film by Rick Moranis, in the TV adaptation of the Disney film Honey, I Shrunk the Kids. He later had a recurring role as the father of Lena Dunham's character on HBO's Girls, for which he won an Emmy in 2016. He also portrayed Gotham City’s corrupt police commissioner Gillian B. Loeb in Fox’s superhero crime drama Gotham.

Scolari died from leukemia in Manhattan on October 22, 2021, at age 66. He had been diagnosed with the disease two years earlier.