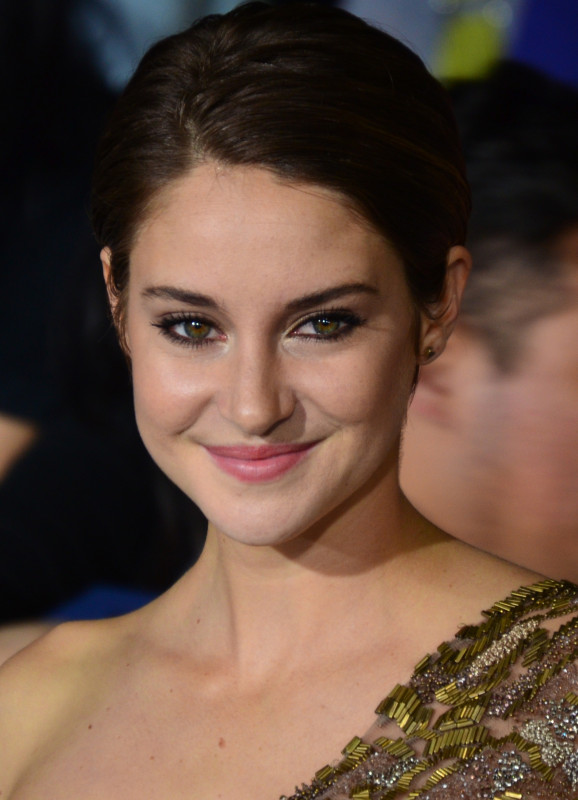 Shailene Diann Woodley (born November 15, 1991) is an American actress. Born in San Bernardino, California, Woodley was raised in Simi Valley, and started modeling at the age of four and began acting professionally in minor television roles. She first gained prominence for her starring role as Amy Juergens in the ABC Family drama series The Secret Life of the American Teenager (2008–2013). She subsequently made her film debut in The Descendants (2011), winning a Cannes Trophée Chopard and receiving nominations for the Golden Globe Award for Best Supporting Actress – Motion Picture and for three Critics' Choice Movie Awards. She went on to star in the coming-of-age film The Spectacular Now (2013), for which she won a special jury prize at the Sundance Film Festival.

Woodley began her acting career in 1999 with a minor role in the television film Replacing Dad. She went on to feature in minor television roles in The District and Crossing Jordan (in the latter, she portrayed the 10-year-old version of Jill Hennessy's title character). She followed with a leading role in the television film A Place Called Home (2004) as California Ford, which earned her a nomination for a Young Artist Award for Best Leading Young Actress in a TV Movie, Miniseries or Special. She also originally played the young Kaitlin Cooper in The O.C. and appeared as the titular character Felicity Merriman in the television film Felicity: An American Girl Adventure (2005). Her performance received another Young Artist Award nomination, this time for Best Performance in a TV Movie, Miniseries, or Special (Comedy or Drama). Following this, Woodley appeared in numerous guest roles in other television series, including Everybody Loves Raymond, My Name is Earl, CSI: NY, Close to Home, and Cold Case.

Woodley is an avid environmental activist and climate advocate. In 2010 she and her mother co-founded the nonprofit organization All it Takes, a youth leadership program that aims to educate young people to practice empathy, compassion, responsibility, and purpose in hopes to foster sustainable, positive change for themselves, others and the environment. She supported Bernie Sanders for president in 2016 and 2020.

In 2011, Woodley made her feature film debut in The Descendants, where she played Alex, the troubled elder daughter of Matt King (played by George Clooney). Her performance received positive reviews from critics. A. O. Scott from The New York Times said, "Ms. Woodley [gives] one of the toughest, smartest, most credible adolescent performances in recent memory." Peter Debruge from Variety said that her performance is a "revelation" and that "in the role of Alex, [she is] displaying both the edge and depth the role demands." Following accolades for her performance, Woodley received a Golden Globe nomination for Best Supporting Actress – Motion Picture, and won the Independent Spirit Award for Best Supporting Female. People named her one of 2012's "Most Beautiful at Every Age." Woodley was also considered one of the 55 faces of the future by Nylon's "Young Hollywood Issue".

In October 2012, Woodley was offered the role of Mary Jane Watson in The Amazing Spider-Man 2. On June 19, 2013, she was cut from the film. Director Marc Webb told The Hollywood Reporter that the cut was "a creative decision to streamline the story and focus on Peter and Gwen and their relationship," and that everyone loved working with Woodley. She had also signed on to star in White Bird in a Blizzard, directed by Gregg Araki. Although filming took place in October 2012, the film was not released until January 20, 2014, at the Sundance Film Festival and then on October 24, 2014, to wider audiences, where it received mixed reviews. In the film, she plays teenager Katrina "Kat" Connors, whose life is thrown into chaos when her mother disappears. Critic Moira MacDonald commended her by saying, "Woodley's depiction of Kat is low-key, natural, and utterly unaffected; as she has in every role, she makes the character her own, with her scratchy little voice and level gaze."

Woodley starred in the film adaptation of Tim Tharp's novel, The Spectacular Now, as Aimee Finecky, an innocent, bookish teenager who begins dating the charming, freewheeling high-school senior (Miles Teller). The film premiered at Sundance on January 18, 2013. Her portrayal of Aimee garnered much praise; Los Angeles Times' critic Betsy Sharkey said that Woodley and Teller "bring such an authentic face of confidence and questioning, indifference and need, pain and denial, friendship and first love," while another critic from The Guardian said that they gave "remarkably strong performances" that "display a depth of feeling that's breathtaking in its simplicity and honest[y]." Additionally, Woodley won the Special Jury Award for Acting, alongside Teller, at the 2013 Sundance Film Festival and received a nomination for the Independent Spirit Award for Best Female Lead.

Also in 2014, Woodley starred as Hazel Grace Lancaster in The Fault in Our Stars, the film adaptation of John Green's novel of the same name. She portrayed a 16-year-old cancer patient who meets and falls in love with Augustus Waters (Ansel Elgort, who also played her brother in the Divergent series), a similarly afflicted teen from her cancer support group. Green said via Twitter about Woodley; "There were so many amazing auditions for the role of Hazel, but Shailene's love for the book and her understanding of Hazel blew me away." The film was a blockbuster success, grossing over $307 million worldwide. Woodley's performance received critical acclaim from critics; Peter Travers in Rolling Stone called her a "sublime actress with a résumé that pretty much proves she's incapable of making a false move on camera", and Richard Roeper of Chicago Sun-Times called her performance as Hazel Oscar-worthy, adding, "she's that memorable". On November 14, 2014, she received The Hollywood Film Award for Hollywood Breakout Performance – Actress for her depiction of Hazel.

In 2014, Woodley starred as Beatrice "Tris" Prior in the film Divergent, an adaptation of Veronica Roth's best-selling young-adult novel of the same name, and the first installment in The Divergent Series. Set in a dystopian and postapocalyptic Chicago, the film received mixed reviews, but Woodley's performance as Tris received a positive reception; Sam Allard from Orlando Weekly said, "with her performance as Tris Prior in Divergent, Woodley rescues and then raises up a film that could have been an utter disaster." Divergent reached the number-one spot at the box office during its opening weekend, and was a financial success.

In 2015, Woodley reprised her role as Tris in The Divergent Series: Insurgent, the second installment in The Divergent Series. Her performance once again received critical acclaim, with Daniel M. Kimmel of New England Movies Weekly writing, "Woodley does solid work here as she's done elsewhere, and continues to be someone to watch." Despite a more negative critical reception than the previous film, Insurgent was commercially successful, making nearly $100 million in its worldwide debut and grossed $295.2 million worldwide. She reprised her role again in the penultimate film of the series Allegiant (2016). The film, however, was poorly reviewed by critics and a box-office bomb. Lionsgate had planned for the final film in the series to be made for television, but Woodley announced that she would not be a part of it. She next starred opposite Joseph Gordon-Levitt in Oliver Stone's biographical thriller Snowden (2016), in which Gordon-Levitt portrayed Edward Snowden. Owen Gleiberman's review said that Woodley "gives a performance of breathtaking dimension: As the movie goes on, she makes Lindsay supportive and selfish, loving and stricken."

Starting in 2015, Woodley took a break from filming for nearly a year, stating in a later interview that she "had hit a wall with acting." From 2017 to 2019, Woodley starred as a sexual assault survivor, alongside Nicole Kidman and Reese Witherspoon, in two seasons of the HBO drama series Big Little Lies. She was nominated for an Emmy and Golden Globe Award in 2017 for Best Supporting Actress in a Limited Series or Movie and Best Performance by an Actress in a Supporting Role in a Series, Limited Series or Motion Picture Made for Television respectively for her role. She also starred in and produced the biographical film Adrift (2018), with Baltasar Kormákur as director. Daniel Feingold from WSVN called her performance as Tami Oldham Ashcraft, a real-life sailor who was stranded at sea after a storm, "Oscar-worthy". Woodley was awarded the Rising Star Award during the 2018 Deauville Film Festival.

In 2016, Woodley protested against the Dakota Access Pipeline, an underground petroleum transport pipeline. In October, she was arrested for criminal trespassing in Saint Anthony, North Dakota. She pleaded guilty and was sentenced to a year of probation.

On September 29, 2016, Woodley was honored at the 20th Anniversary Global Green Environmental Awards, receiving the Entertainment Industry Environmental Leadership Award for co-founding All it Takes. In October 2016, she was given the Female EMA Futures Award during the 26th Annual Environmental Media Association (EMA) Awards.

In 2018, Woodley confirmed she was dating Australian-Fijian rugby union player Ben Volavola. In an interview with The Hollywood Reporter, she said: "I fall in love with human beings based on who they are, not based on what they do or what sex they are". In April 2020, the relationship with Volavola was reported to have ended.

In 2018, Woodley took activist Calina Lawrence to the 75th Golden Globe Awards as her guest; they met at Standing Rock while protesting the Dakota Access Pipeline.

In July 2019, Woodley became an Oceans Ambassador for Greenpeace and embarked on a three-week-long expedition to the Sargasso Sea to study the impact of plastics and microplastics on marine life, and to document the importance of this unique ecosystem for protection under a new global ocean treaty that is being negotiated at the United Nations.

She will next star in Misanthrope, an upcoming thriller centered on a talented but troubled cop who is recruited by the FBI to help profile and track down a serial killer. The film is set to be directed by Damián Szifron. Woodley will serve as a producer on the film. She will star in the thriller Panopticon with Anthony Mackie and Jacob Latimore, which began filming in New Mexico in summer 2021. She joined Jack Whitehall in the upcoming comedy film Robots, which was slated to begin filming in New Mexico in August 2021. She is set to star in the upcoming Showtime hourlong drama series Three Women, based on the award-winning and bestselling book by Lisa Taddeo. Filming was set to begin in Fall 2021. She was also cast in Girl Named Sue, a film based on the true story of Sue Webber-Brown, a DEA agent who created the Drug Endangered Children (DEC) protocol. She joined Shia Lebeouf and Robert De Niro in the upcoming crime drama After Exile, with Joshua Michael Stern as director. In November 2020, she joined The Fence, a political satire film that will reunite her with Miles Teller for their fifth film. The film will be directed by Grímur Hákonarson. She will also star in the animated feature film Scarygirl, as well as in the romance film No Baggage, which are in pre-production and development respectively. She is also attached to portray Lina Lardi, mistress of Ferrari founder Enzo Ferrari, in Michael Mann's biopic Ferrari.

Woodley was reported to have been in a relationship with NFL quarterback Aaron Rodgers since 2020. In February 2021, Rodgers referred to his "fiancée" during his acceptance speech for the league's MVP award at the NFL Honors ceremony, confirming that he was engaged, but not to whom. Woodley confirmed she was engaged to Rodgers in a February 22, 2021 appearance on The Tonight Show Starring Jimmy Fallon. In February 2022, it was reported that Woodley and Rodgers had ended their engagement.