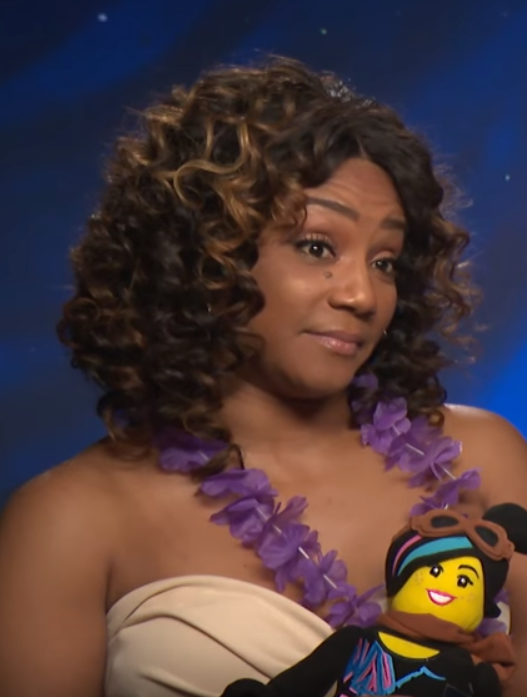 Tiffany Sara Cornilia Haddish (born December 3, 1979) is an American stand-up comedian and actress. She was named one of the 100 most influential people in the world by Time magazine in 2018, and The Hollywood Reporter listed her among the 100 most powerful people in entertainment in both 2018 and 2019.

Haddish starred in the TBS series The Last O.G. (2018–2020) and executive produced and voiced Tuca in the Netflix/Adult Swim animated series Tuca & Bertie (2019–present). Haddish released the album Black Mitzvah in 2019, for which she won the Grammy Award for Best Comedy Album, making her the second African-American woman to win this prize after Whoopi Goldberg in 1986. In 2022, she was part of the main cast for the crime comedy series The Afterparty and is set to reprise her role in the show's second season.

In 1988, while her family was living in Colton, California, Haddish's mother Leola suffered severe brain damage in a car accident. It was believed to have caused Leola's schizophrenia; Haddish said her mother became quick-tempered, abusive and violent. Haddish, then nine years old and the oldest of five siblings, became the family's primary caregiver. It was around this time that Haddish discovered her gift for making people laugh. She said, "If I could make [Leola] laugh and turn her anger into some joy, I was less likely to get beat. Same thing in school: If I could make the kids laugh, they'd help me with my homework and protect me from other bullies."

In 1997, after her social worker gave her an ultimatum to attend either psychiatric therapy or the Laugh Factory Comedy Camp, the 17-year-old Haddish opted for comedy as an outlet for her pain. She says that the mentorship from many notable comedians—including Richard Pryor, Dane Cook, Charles Fleischer and the Wayans brothers—helped her discover a passion for comedy that "literally saved her life." She incorporates her life experiences in her sets, finding that it functions as a "safe space" for her.

Haddish married William Stewart in 2008. He helped her locate her once-estranged father who walked her down the aisle at their first wedding, which she described as "one of the happiest days of [her] life". She filed for divorce in Los Angeles County in 2011, which was finalized in 2013. She was in a relationship with rapper Common from mid-2020 to November 2021.

Haddish's first break was a spot on the comedy competition Bill Bellamy's Who's Got Jokes? She has appeared on such shows as Chelsea Lately, That's So Raven, My Name Is Earl, It's Always Sunny in Philadelphia, The Underground, Nick Cannon's Short Circuitz, @midnight, Just Jordan, In the Motherhood, Def Comedy Jam, Reality Bites Back and New Girl, and has starred in movies including Meet the Spartans and Janky Promoters. In 2013, she had a recurring role on Real Husbands of Hollywood. In 2014, she was cast in the Oprah Winfrey Network drama series If Loving You Is Wrong. She left after the first season for a regular role on the NBC sitcom The Carmichael Show, where she starred as Nekeisha, the semi-estranged wife of Bobby Carmichael (Lil Rel Howery) for three seasons. In 2016, she co-starred opposite Jordan Peele and Keegan-Michael Key in the comedy film Keanu in the role of Hi C.

In 2017, Haddish revealed that she had briefly dabbled in Scientology.

In 2017, Haddish starred alongside Regina Hall, Jada Pinkett Smith and Queen Latifah in the comedy film Girls Trip. It received widely positive reviews from critics, attaining an approval rating of 91% on Rotten Tomatoes and a "generally favorable reviews" score of 71 out of 100 from Metacritic. Haddish was acclaimed for her performance as the loud happy-go-lucky Dina, with several critics likening her breakthrough to that of Melissa McCarthy. Katie Walsh of the Chicago Tribune proclaimed that "this is Haddish's movie, and will make her a star. It's clear from the moment she hits the screen..." Further, Girls Trip grossed over $140 million worldwide against its production budget of $20 million to become the highest-grossing comedy film of 2017. In 2021, Haddish's performance was included on The New Yorker's list of the best film performances of the 21st century. The author of the list, Richard Brody, wrote that "...where most comedians, even improvising, appear to create a persona, Haddish imbues her work with the force of her own experience. If the seventeen-minute speech that she gave at the New York Film Critics Circle banquet in 2018 had been released as a film, it would have made my list, too. Both it and her performance in Girls Trip, as great as they are, only hint at the power of her inventive imagination."

In August 2017, Haddish's stand-up comedy special Tiffany Haddish: She Ready! From the Hood to Hollywood premiered on Showtime. Reviewing the special for Vox, Caroline Framke stated, "Haddish is just really damn funny, and deserves a recommendation wherever we can give it to her... [She] unleashes hilarious, filthy, and even moving anecdotes to tell the story of her life to this point, without anything holding her back, at long last." Haddish also co-hosted the BET game show Face Value with Deon Cole. She hosted the November 11, 2017 episode of Saturday Night Live, making her the first African-American woman stand-up comedian to host the show; it won her the Primetime Emmy Award for Outstanding Guest Actress in a Comedy Series. Her memoir, The Last Black Unicorn (written with Tucker Max ) was released in December 2017 by Simon & Schuster and debuted at #15 on The New York Times best-seller list.

Beginning in 2018, Haddish starred opposite Tracy Morgan in the TBS sitcom The Last O.G., her first lead in a sitcom. Her 2018 film roles include a supporting part in Uncle Drew, and a lead role, opposite Kevin Hart, in the comedy Night School, reuniting with Girls Trip director Malcolm D. Lee. In parallel, she starred in the Tyler Perry movie Nobody's Fool with Tika Sumpter, Omari Hardwick, Mehcad Brooks, Amber Riley and Whoopi Goldberg. The film received mixed reviews from critics and grossed over $33 million worldwide. In 2018, Haddish signed a first-look deal with HBO and was named one of the 100 most influential people in world by Time magazine. In the same year, The Hollywood Reporter listed her among the 100 most powerful people in entertainment, and again in 2019.

Haddish became a naturalized Eritrean citizen on May 22, 2019, while taking part in festivities there commemorating the 28th anniversary of Eritrean independence from Ethiopia. She first visited the country in 2018 to bury her Eritrean father, who came to the U.S. as a refugee, and to connect with her relatives.

She attended George Ellery Hale Middle School in Woodland Hills, Los Angeles and graduated from El Camino Real High School, also in Woodland Hills, where she was the school mascot. She said she could not read very well until high school, but improved when she received tutoring from a teacher. She also got into a lot of trouble at school, despite her award-winning participation in drama competitions presenting Shakespearean monologues. In 2018, Haddish stated that she had been raped at age 17 by a police cadet, which she says led to her aggressiveness in avoiding unwanted advances from men. After graduating from high school, Haddish was homeless, living in her car for a period of time.

In 2019, Haddish voiced Queen Watevra Wa'Nabi in The Lego Movie 2: The Second Part; Daisy in The Secret Life of Pets 2; and Tuca on the Netflix animated sitcom Tuca & Bertie, which premiered in May. Also that year, ABC revived Kids Say the Darndest Things with Haddish as host and producer. It premiered on October 6 as part of a three-hour family-oriented block of programming. In August 2019, Netflix premiered her new comedy special, Tiffany Haddish Presents: They Ready. In each episode, Haddish introduced one of her favorite stand-up comedians in order to give them mainstream exposure. The series included stand-up sets from Chaunté Wayans, April Macie, Tracey Ashley, Aida Rodriguez, Flame Monroe and Marlo Williams. In 2020, Haddish starred in Like a Boss, the first studio comedy film of the 2020s, for Paramount Pictures, co-starring with Rose Byrne and Salma Hayek.

Haddish, whose father was Jewish, had her bat mitzvah ceremony in December 2019 at the age of 40. Reform rabbi Susan Silverman, sister of comedian Sarah Silverman, officiated.

After guest-starring on several television series, Haddish gained prominence for her role as Nekeisha Williams on the NBC sitcom The Carmichael Show (2015–2017). Her breakthrough came in with a leading role in the comedy film Girls Trip (2017), which earned her several accolades, such as nominations for two Critics' Choice Awards. In 2021, Haddish's performance was included on The New Yorker's list of the best film performances of the 21st century. She won a Primetime Emmy Award for hosting a Saturday Night Live episode (2017) and published a memoir, The Last Black Unicorn (2017).

On January 14, 2022, Haddish was arrested in Peachtree City, Georgia, on a charge of DUI, as police suspected she was under the influence of marijuana. Around 4:00 a.m., police received a 911 call of a driver who had fallen asleep behind the wheel on Highway 74. Police located Haddish, driving the vehicle described to the 911 operator, as she was attempting to pull into the driveway of a residence in an Atlanta suburb. She was booked at Fayette County Jail and later released the same day on a $1,666 bond. At the time, Haddish was in the area to partake in filming for Haunted Mansion.