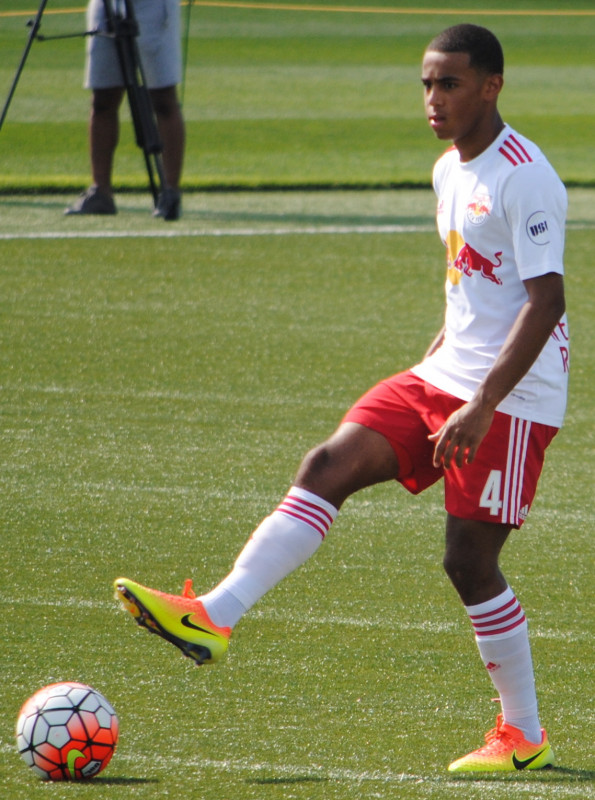 Adams joined the Red Bulls Academy in 2011 and played with the U-13, U-14 and U-16 sides before turning professional.

On March 19, 2015, Adams was signed to New York Red Bulls II, the club's senior reserve team playing in the United Soccer League. Adams made his debut for the team on April 4, 2015 in a 4–1 victory over Toronto FC II, the first victory in club history. After appearing regularly for NYRB II during the 2016 season, Adams helped the club to a 5–1 victory over Swope Park Rangers in the 2016 USL Cup Final.

On July 23, 2015, Adams made his debut with the New York Red Bulls first team featuring in a friendly match against Premier League champions Chelsea. He scored the second goal of the match, slotting a header past Asmir Begović in the 69th minute as the Red Bulls went on to win 4–2.

Adams signed his first senior team contract on November 3, 2015, and joined the first team in preseason training camp in 2016. Adams made his first MLS bench appearance as an unused substitute on April 1, 2016, during a 1–0 loss to the New England Revolution and on April 13 made his MLS debut, starting against the San Jose Earthquakes before returning to Red Bulls II on loan for the remainder of the season.

Adams represented the United States at multiple youth levels before making his senior team debut in 2017.

Adams has represented the United States at the U-15, U-17, and U-20 levels. He appeared in all of his team's matches at the 2015 CONCACAF U-17 Championships in Honduras, helping the United States qualify for the 2015 FIFA U-17 World Cup. In May 2017 Adams played every match for the United States at the 2017 FIFA U-20 World Cup in South Korea. On November 14, 2017, Adams earned his first cap for the senior national team, playing the full 90 minutes in a 1–1 draw with Portugal. On September 11, 2018, Tyler Adams scored a goal against Mexico in a friendly at Nissan Stadium in Nashville, Tennessee.

Adams emerged as a regular starter for the Red Bulls senior team in the 2017 season. On August 15, 2017, Adams helped New York to a 3–2 come from behind victory over FC Cincinnati, assisting on Bradley Wright-Phillips's 77th-minute equalizer. With the win New York reached their first Open Cup final since 2003. Adams scored his first two MLS goals in a 3–3 draw with D.C. United on September 27, 2017.

On March 13, 2018, Adams opened the scoring for New York in a 3–1 victory over Club Tijuana, helping the club advance to the semifinals of the CONCACAF Champions League for the first time.

Adams joined RB Leipzig in January 2019, reuniting him with former coach Jesse Marsch. He made his first league start on January 27 in a 4–0 victory against Fortuna Düsseldorf. On February 16, Adams recorded his first Bundesliga assist in a 3–1 victory over Stuttgart. He missed the entirety of April games due to an adductor injury, and until then Leipzig had not lost a single game with him on the field. On May 16, Adams returned to the team, and eleven days later started the DFB-Pokal final against Bayern Munich to which Leipzig lost 0–3.

In June 2019, Adams was named to the squad for the 2019 CONCACAF Gold Cup , but was forced to withdraw due to an injury .

On August 13, 2020, Adams scored the winning goal for Leipzig in a 2–1 win over Atlético Madrid, helping the club advance to the semifinals of the UEFA Champions League for the first time.