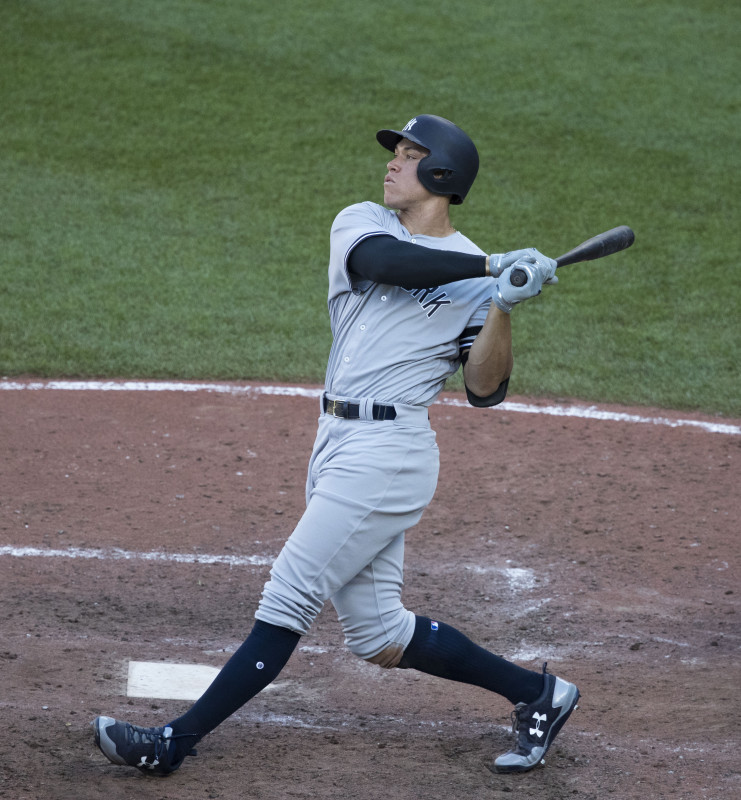 On September 25, Judge hit his 49th and 50th home runs, tying and surpassing Mark McGwire's single season rookie home run record. On September 30, Judge hit his 52nd home run of the season and his 33rd at Yankee Stadium, surpassing Babe Ruth's single-season record (set in 1921) for most home runs hit by a Yankees player at his home ballpark. After the conclusion of September, Judge won Player of the Month for the second time and Rookie of the Month for the fourth time.

Judge made his MLB debut on August 13, 2016, starting in right field against the Tampa Bay Rays. In his first MLB at-bat, Judge hit a home run off Matt Andriese; the previous batter, Tyler Austin, also making his MLB debut, had done the same. This marked the first time that two teammates had hit home runs in their first MLB career at bats in the same game. Judge also hit a home run in his second MLB game, becoming the second Yankees player (after Joe Lefebvre in 1980) to homer in each of his first two MLB games. Judge's debut season, in which he batted .179 and struck out 42 times in 84 at-bats (95 plate appearances), ended prematurely when he was placed on the 15-day disabled list with a grade two right oblique strain on September 13, 2016, against the Los Angeles Dodgers.

Aaron James Judge (born April 26, 1992) is an American professional baseball outfielder for the New York Yankees of Major League Baseball (MLB). Judge was unanimously selected as the American League (AL) Rookie of the Year in 2017 and finished second in voting for the AL Most Valuable Player Award that year. In 2022, he set the AL record for most home runs in a season, breaking the 61-year-old record held by Roger Maris.

Judge, who eventually grew to 6 feet 7 inches (2.01 metres) tall, attended Linden High School, where he was a three-sport star. He played as a pitcher and first baseman for the baseball team, a wide receiver for the football team, and as a center for the basketball team. He set a school record for touchdowns (17) in football and led the basketball team in points per game (18.2). In baseball, he was part of the Linden High School team that made the California Interscholastic Federation Division III playoffs. Judge graduated from Linden High in 2010.

Various colleges recruited Judge to play tight end in football, including Notre Dame, Stanford, and UCLA, but he preferred baseball. The Oakland Athletics selected him in the 31st round of the 2010 MLB draft, but he opted to enroll at California State University, Fresno (Fresno State) to play for the Fresno State Bulldogs baseball team in the Western Athletic Conference (WAC). In 2011, Judge was part of a Fresno State team that shared the Western Athletic Conference (WAC) regular season title, won the WAC Tournament, and qualified for the 2011 NCAA Division I Baseball Tournament. Louisville Slugger named him a Freshman All-American. He won the 2012 TD Ameritrade College Home Run Derby. He played collegiate summer baseball for the Brewster Whitecaps of the Cape Cod Baseball League in the summer of 2012. In his junior year, Judge led the Bulldogs in home runs, doubles, and runs batted in (RBIs). Judge was named to the all-conference team in all three of his seasons for the Bulldogs—in the WAC in his first two seasons, and the Mountain West Conference (MW) as a junior (the Bulldogs joined the MW in July 2012, between his sophomore and junior seasons).

Judge finished the 2017 season with a .284 batting average, 52 home runs, and 114 RBIs. He led the American League in home runs, runs scored (128), and walks (a major-league rookie record 127). He ranked second in the league in RBIs. He also struck out an MLB-leading 208 times, breaking the Yankees record previously set by Curtis Granderson in 2012 and a rookie record previously set by Kris Bryant in 2015.

On June 10, Judge hit a home run that had an exit velocity of 121.1 miles per hour (194.9 km/h), again setting a new record for the hardest measured by Statcast. The following day, Judge went 4-for-4 with two home runs; one of the home runs traveled 495 feet (151 m), making it the longest home run hit in the 2017 season. On June 12, Judge was named the AL Player of the Week. His week ended with him leading the AL in all three Triple Crown categories. Judge was named the AL Player of the Month for the month of June, batting .337 with 10 home runs, 25 RBIs and a .481 OBP. His performance in the month of June also earned him his third consecutive AL Rookie of the Month award, the longest streak since Mike Trout won four in a row in 2012. Judge had a 32-game on-base streak, including reaching base in every game in the month of June. On July 2, Judge was voted as a starting outfielder to the 2017 MLB All-Star Game, receiving 4,488,702 votes, the most of any player in the AL.

The Yankees invited Judge to spring training as a non-roster player in 2015. Judge began the 2015 season with the Trenton Thunder of the Class AA Eastern League. After Judge batted .284/.350/.510 (5th in the league) with 12 home runs (tied for 9th) in 63 games for Trenton, the Yankees promoted Judge to the Scranton/Wilkes-Barre RailRiders of the Class AAA International League in June. He was chosen to represent the Yankees at the 2015 All-Star Futures Game. The Yankees decided not to include Judge in their September call-ups. Judge batted .224/.308/.373 with eight home runs in 61 games for Scranton/Wilkes-Barre. The Yankees invited Judge to spring training in 2016, and he began the season with Scranton/Wilkes-Barre. Judge was named to the International League All-Star Team in 2016, but did not play in the 2016 Triple-A All-Star Game after he spent a month on the disabled list due to a knee sprain. In 93 games for the RailRiders, Judge batted .270/.366/.489 with 19 home runs (4th in the league), 62 runs (tied for 8th), and 65 RBIs (tied for 7th).

The Yankees named Judge their Opening Day right fielder against the Tampa Bay Rays. He had his first multi-home run game on April 28 against the Baltimore Orioles to help the Yankees win 14–11, coming back from a 9–1 deficit. One of the home runs had a measured exit velocity of 119.4 miles per hour (192.2 km/h), the fastest exit velocity for a home run measured by Statcast since it was adopted in 2015. This record would later be broken by teammate Giancarlo Stanton on August 9, 2018, when Stanton launched a home run with an exit velocity of 121.7 miles per hour (195.9 km/h). Judge ended the month of April with 10 home runs, tying the rookie record set by José Abreu and Trevor Story. He was named the American League's (AL) Rookie of the Month for April. In April, he had a .303 batting average, 10 home runs, 20 RBIs, and a .411 OBP in 22 games.

Judge is a Christian and has posted about his faith on his Twitter account. He keeps a note on his phone that reads ".179", his batting average with the Yankees in 2016, and looks at it daily as a source of motivation. Judge appeared on the cover of the May 15, 2017 edition of Sports Illustrated. On May 15, 2017, he appeared on an episode of The Tonight Show Starring Jimmy Fallon where he posed undercover to ask Yankee fans questions about himself. On November 6, 2017, it was revealed that Judge would be the cover athlete for MLB The Show 18, as well as an endorsement deal with Pepsi. For the 2018 season, Judge signed an endorsement deal with Adidas, finishing his contract with Under Armour he had since 2014.

Judge played college baseball for the Fresno State Bulldogs, and the Yankees selected him with the 32nd pick in the first round of the 2013 MLB draft. After making his MLB debut in 2016 and hitting a home run in his first major league at bat, Judge went on to have a record-breaking rookie season. In 2017, he was named an All-Star, won the Home Run Derby (the first MLB rookie to do so), and hit 52 home runs, breaking Mark McGwire's MLB rookie record of 49 and Joe DiMaggio's Yankee full-season rookie record of 29. His rookie record stood for two years, until Pete Alonso hit 53 home runs in 2019. Judge won the AL Rookie of the Month Awards for April, May, June, and September, as well as the AL's Player of the Month Award for June and September.

The Yankees debuted a cheering section in the right-field seats of Yankee Stadium on May 22, 2017. Called "The Judge's Chambers", the section spans three rows in section 104 and contains 18 seats. Fans are chosen by the team to sit there and are outfitted with black robes, wigs, and foam gavels. In a game against the Oakland Athletics on May 28, Judge hit his first career grand slam. Judge was named AL Rookie of the Month once again for May. In May, he had a .347 batting average, seven home runs, 17 RBIs, and a .441 OBP in 26 games.

During the week of May 10–17, Judge earned his fourth career AL Player of the Week Award, most recently winning in September 2017. He was the second Yankees winner this season, following his teammate Corey Kluber who earned Player of the Month honors in April. Judge posted a slash line of .571/.640/1.333 with eight runs scored, 12 hits, a double, five home runs, six RBIs and three walks over six games played (five multi-hit games and his 13th career multi-homer game). He also hit his 130th career home run, the second-most in MLB history through 460 career games, trailing only Ryan Howard (142).

In 2019, he batted .272/.381/.540, with 27 home runs and 55 RBIs in 378 at-bats. Balls he hit had the highest exit velocity on average of those hit by all major leaguers, at 95.9 mph. He led the league in defensive runs saved as a right fielder (19 runs saved, tied with Cody Bellinger, but given higher placing due to efficiency by playing in fewer innings (775.1 vs. 911.1)). This earned him the Wilson Defensive Player of the Year Award for his position in right field.

In 2021, Judge had the highest average exit velocity of all major league batters, at 95.8 mph.

In July 2021, before the start of the second half of the season, Judge and five other players tested positive for COVID-19 causing the Yankees to place them all on the COVID-19 injured list. The MLB went on to postpone the Yankees game against the Boston Red Sox that was scheduled to be played on July 15. The postponed game was made up as part of a doubleheader on August 17, at Yankee Stadium.

On November 23, 2021, Judge was named to the First Team selections for the All-MLB Team at the outfield position. Determined by a fan vote and a panel consisting of media members, former players and baseball officials, this was Judge's first time being selected after coming off a season in which he led the Yankees in most offensive categories.

Ninety-five years after Babe Ruth hit 60 home runs in a season, Judge became the third MLB player in American League (AL) history to hit 60 home runs in one season. His blast to left field was off Wil Crowe of the Pittsburgh Pirates at Yankee Stadium on September 20, 2022. He also became the fastest Yankee to accomplish this feat, doing so in 147 games.