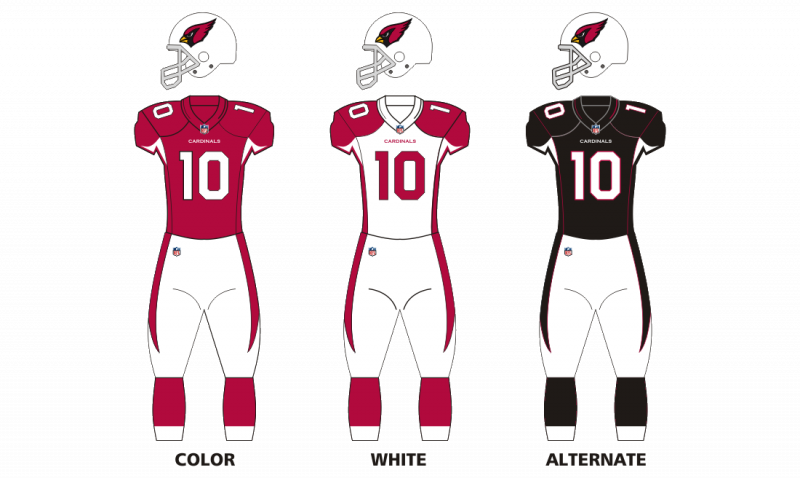 The Arizona Cardinals are a professional American football team based in the Phoenix metropolitan area. The Cardinals compete in the National Football League (NFL) as a member club of the National Football Conference (NFC) West division. The team was founded as the Morgan Athletic Club in 1898, and is the oldest continuously run professional football team in the United States. The Cardinals play their home games at State Farm Stadium, which opened in 2006 and is located in the northwestern suburb of Glendale.

The team was established in Chicago in 1898 as an amateur football team and joined the NFL as a charter member on September 17, 1920. Along with the Chicago Bears, the club is one of two NFL charter member franchises still in operation since the league's founding (the Green Bay Packers were an independent team until they joined the NFL a year after its creation in 1921). The club then moved to St. Louis in 1960 and played in that city through 1987 (sometimes referred to locally in St. Louis as the "Football Cardinals", the "Gridbirds" or the "Big Red" to avoid confusion with the Major League Baseball team of the same name). Before the 1988 season, the team moved west to Tempe, Arizona, a college suburb east of Phoenix, and played their home games for the next 18 seasons at Sun Devil Stadium on the campus of Arizona State University. In 2006, the club moved to their current home field in Glendale, although the team's executive offices and training facility remain in Tempe.

The franchise's inception dates back to 1898, when a neighborhood group gathered to play in the Chicago South Side, calling themselves Morgan Athletic Club. Chicago painting and building contractor Chris O'Brien acquired the team, which he relocated to Normal Field on Racine Avenue. The team was known as Racine Normals until 1901, when O'Brien bought used jerseys from the University of Chicago. He described the faded maroon clothing as "Cardinal red" and the team became the Racine Street Cardinals. The team eventually became in 1920 a charter member of the American Professional Football Association (APFA), which two years later was rechristened to National Football League (NFL). The team entered the league as the Racine Cardinals, however the name was changed in 1922 to Chicago Cardinals to avoid confusion with the Horlick-Racine Legion, who entered the league the same year. Except for 1925, when they were awarded the championship after the Pottsville Maroons were suspended, the Cardinals experienced only minimal success on the playing field during their first 26 seasons in the league. During the post-World War II years, the team reached two straight NFL finals against the Philadelphia Eagles, winning in 1947 – eight months after Charles Bidwill's death – and losing the following year. After years of bad seasons and losing fans to the cross-town rivals Chicago Bears, by the late 1950s the Cardinals were almost bankrupt, and owner Violet Bidwill Wolfner became interested in a relocation.

The franchise has won two NFL championships, both while it was based in Chicago. The first occurred in 1925, but is the subject of controversy, with supporters of the Pottsville Maroons believing that Pottsville should have won the title. Their second title, and the first to be won in a championship game, came in 1947, nearly two decades before the first Super Bowl. They returned to the title game to defend in 1948, but lost the rematch 7–0 in a snowstorm in Philadelphia.

Since winning the championship in 1947, the team suffered many losing seasons, and currently holds the longest active championship drought of North American sports at 72 consecutive seasons. In 2012 the Cardinals became the first NFL franchise to lose 700 games since its inception. The franchise's all-time win-loss record (including regular season and playoff games) at the conclusion of the 2019 season is 565–772–41 (558–763–41 in the regular season, 7–9 in the playoffs). They have been to the playoffs ten times and have won seven playoff games, three of which were victories during their run in the 2008–09 NFL playoffs. During that season, they won their only NFC Championship Game since the 1970 AFL–NFL merger, and reached Super Bowl XLIII (losing 27–23 to the Pittsburgh Steelers). The team has also won five division titles (1974, 1975, 2008, 2009 and 2015) since their 1947–48 NFL championship game appearances. The Cardinals are the only NFL team who have never lost a playoff game at home, with a 5–0 record: the 1947 NFL Championship Game, two postseason victories during the aforementioned 2008–09 NFL playoffs, one during the 2009–10 playoffs, and one during the 2015–16 playoffs.

Starting in 1947, the team had a logo of a cardinal bird perched on the laces of a football.

The Cardinals' first home game in Arizona, in 1988, saw them play in red jerseys. Thereafter, for the next 18 years in Arizona, the Cardinals, like a few other NFL teams in warm climates, wore their white jerseys at home during the first half of the season—forcing opponents to suffer in their darker jerseys during Arizona autumns that frequently see temperatures over 100 °F (38 °C). However, this tradition did not continue when the Cardinals moved from Sun Devil Stadium to State Farm Stadium in 2006, as early-season games (and some home games late in the season) were played with the roof closed. With the temperature inside at a comfortable 70 °F (21 °C), the team opted to wear red jerseys at home full-time. The Cardinals wore white jerseys at home for the first time at State Farm Stadium on August 29, 2008, in a preseason game against the Denver Broncos.

In 1994, the Cardinals participated in the NFL's 75th anniversary throwback uniform program. The jerseys were similar to those of the 1920s Chicago Cardinals, with an interlocking "CC" logo and three stripes on each sleeve. The uniform numbers were relocated to the right chest. The pants were khaki to simulate the color and material used in that era. The Cardinals also stripped the logos from their helmets for two games: at Cleveland and home vs. Pittsburgh.

Not long after the 1987 NFL season, Bidwill agreed to move to Phoenix on a handshake deal with state and local officials, and the team became the Phoenix Cardinals. The franchise changed its geographic name from Phoenix to Arizona on March 17, 1994. (The franchise has never played in the city of Phoenix proper, however there are several NFL teams which do not play in their market's central cities.) The 1998 NFL season saw the Cardinals break two long droughts, qualifying for the playoffs for the first time in 16 years. The team got their first postseason win since 1947 by defeating the Dallas Cowboys 20–7 in the Wild Card Playoffs. In 2008, the Cardinals, led by quarterback Kurt Warner, won the NFC Championship Game to advance to the Super Bowl for the first time in franchise history. They lost Super Bowl XLIII 27–23 to the Pittsburgh Steelers in the final seconds.

The Cardinal head on the helmet also appeared on the sleeve of the white jersey from 1982 to 1995. In 1996, the state flag of Arizona was moved higher on the sleeve after the Cardinal head was eliminated as sleeves on football jerseys became shorter, and black was removed as an accent color, instead replaced with a blue to match the predominant color of the state flag. In 2002, the Cardinals began to wear all-red and all-white combinations, and continued to do so through 2004, prior to the team's makeover.

The Cardinals' flagship radio station is KMVP-FM; Dave Pasch, Ron Wolfley, and Paul Calvisi handle the radio broadcast. Spanish-language radio broadcasts are heard on the combo of KQMR/KHOV-FM "Latino Mix" under a contract with Univisión, signed in 2015. Prior to 2015, they were heard on KDVA/KVVA-FM "José FM", as well as co-owned KBMB AM 710. The Cardinals were the first NFL team to offer all 20 preseason and regular season games on Spanish-language radio, doing so in 2000. Gabriel Trujillo and Rolando Cantú are the Spanish broadcast team. The Cardinals have the most extensive Mexican affiliate network in the NFL, with contracts with Grupo Larsa (in the state of Sonora) and Grupo Radiorama (outside Sonora) and stations in 20 cities, including Hermosillo, Guadalajara and Mexico City.

In 2005, the team unveiled its first major changes in a century. The cardinal-head logo was updated to look sleeker and meaner than its predecessor. Numerous fans had derisively called the previous version a "parakeet". Black again became an accent color after an eight-year absence, while trim lines were added to the outside shoulders, sleeves, and sides of the jerseys and pants. Both the red and white jerseys have the option of red or white pants.

The Cardinals' Ring of Honor was started in 2006 to mark the opening of State Farm Stadium. It honors former Cardinal greats from all eras of the franchise's history. Following is a list of inductees and the dates that they were inducted.

Hoping to break a six-game losing streak, the Cardinals wore the red pants for the first time on October 29, 2006, in a game at Lambeau Field against the Green Bay Packers. The Packers won 31–14, and the Cards headed into their bye week with a 1–7 mark. Following the bye week, the Cardinals came out in an all-red combination at home against the Dallas Cowboys and lost, 27–10. Arizona did not wear the red pants for the remainder of the season and won four of their last seven games. However, the following season, in 2007, the Cardinals again wore their red pants for their final 3 home games. They wore red pants with white jerseys in games on the road at the Cincinnati Bengals and Seattle Seahawks. They paired red pants with red jerseys, the all-red combination, for home games against the Detroit Lions, San Francisco 49ers, Cleveland Browns, and St. Louis Rams. The red pants were not worn at all in 2008, but they were used in home games vs. Seattle, Minnesota, and St. Louis in 2009. The red pants were paired with the white road jersey for the first time in three years during a 2010 game at Carolina, but the white jersey/red pants combination were not used again until 2018, when they broke out the combination against the Kansas City Chiefs.

After their historic 2008 season, the Cardinals posted a 10–6 record in 2009, their first season with 10 wins in Arizona. The Cardinals clinched their second consecutive NFC West title, and were defeated by eventual Super Bowl champion New Orleans Saints 45–14 in the divisional playoffs. The next time they would make the playoffs would be in 2014, when they ended up as a wild card. They set the best regular-season record in the team's history in Arizona at 11–5, but were defeated by the 7–8–1 NFC South champions Carolina Panthers.

The Cardinals wore white at home for the first time in a regular season game at State Farm Stadium against the Houston Texans on October 11, 2009. In October 2009, the NFL recognized Breast Cancer Awareness Month, and players wore pink-accented items, including gloves, wristbands, and shoes. The team thought the pink accents looked better with white uniforms than with red.

From 1988 to 2012 (except 2005, when they trained in Prescott), the Cardinals conducted their annual summer training camp at Northern Arizona University in Flagstaff. The Cardinals moved their training camp to State Farm Stadium (then known as University of Phoenix Stadium) in 2013. The stadium was the site of the 2015 Pro Bowl, unlike in past years, where it was held at Aloha Stadium in Honolulu, Hawaii. The stadium also played host to Super Bowls XLII and XLIX, and will host Super Bowl LVII in 2023.