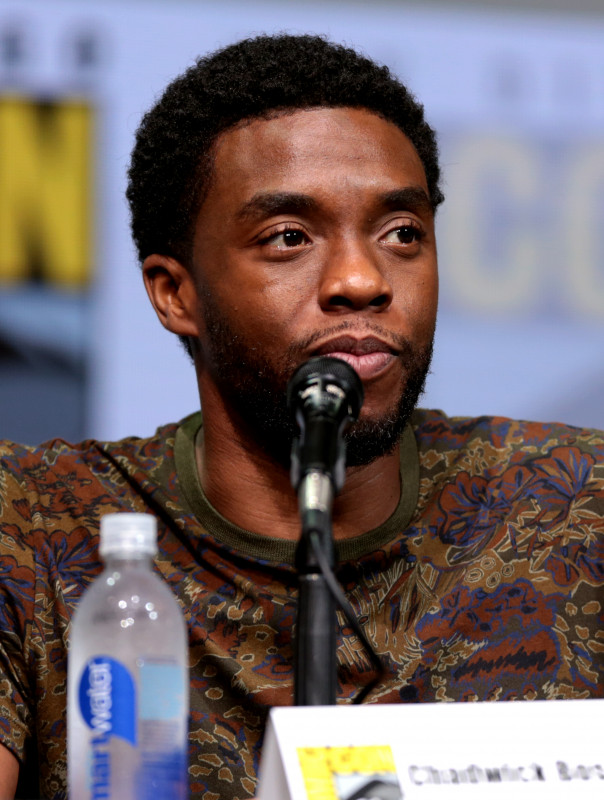 Chadwick Aaron Boseman (November 29, 1976 – August 28, 2020) was an American actor. After studying directing at Howard University, he landed his first major role as a series regular on Persons Unknown (2010). Boseman's breakthrough performance came as baseball player Jackie Robinson in the biographical film 42 (2013). He continued to portray historical figures, starring in Get on Up (2014) as singer James Brown and Marshall (2017) as Supreme Court Justice Thurgood Marshall.

Boseman graduated from T. L. Hanna High School in 1995 where he played on the basketball team. In his junior year, he wrote his first play, Crossroads, and staged it at the school after a classmate was shot and killed. Boseman attended college at Howard University in Washington, D.C., graduating in 2000 with a Bachelor of Fine Arts in directing. One of his teachers was Phylicia Rashad, who became a mentor. She helped raise funds, notably from her friend and prominent actor Denzel Washington, so that Boseman and some classmates could attend the Oxford Mid-Summer Program of the British American Drama Academy in England, to which they had been accepted.

Boseman acted on stage in multiple productions, winning an AUDELCO award in 2002, and he also directed and wrote plays. Part of the Hip Hop theater movement, his play-writing included Rhyme Deferred (co-writer and performer), and Hieroglyphic Graffiti. Boseman's script for Deep Azure was commissioned by the Congo Square Theatre Company in Chicago, and was nominated for a 2006 Joseph Jefferson Award for New Work. He directed a number of theater productions, and directed, wrote, and produced the short film, Blood Over a Broken Pawn in 2007, which was honored at the 2008 Hollywood Black Film Festival.

In 2003, Boseman was cast in his first television role, an episode of Third Watch. That same year, Boseman portrayed Reggie Montgomery in the daytime soap opera All My Children, but stated that he was fired after voicing concerns to producers about racist stereotypes in the script; the role was subsequently re-cast, with Boseman's future Black Panther co-star Michael B. Jordan assuming the role. His early work included episodes of the series Law & Order, CSI: NY, and ER. In 2008, he played a recurring role on the television series Lincoln Heights and appeared in his first feature film, The Express: The Ernie Davis Story, as running back Floyd Little. He landed his first regular role in the 2010 television series Persons Unknown.

He lived in Brooklyn at the start of his career. Boseman worked as the drama instructor in the Schomburg Junior Scholars Program, housed at the Schomburg Center for Research in Black Culture in Harlem, New York. In 2008, he moved to Los Angeles to pursue his acting career.

As James Brown in 2014's Get on Up, Boseman did some singing and all of his own dancing. He watched Brown's performances for weeks, and spoke with Mick Jagger before deciding to portray 'The Hardest Working Man in Show Business'. According to Irish Times film correspondent, Donald Clarke, "Get on Up tested every weapon in the actor’s arsenal...The performance confirmed that, like a star from Hollywood’s golden age, Chadwick Boseman could do it all and do it all with style."

In 2014, Boseman also appeared opposite Kevin Costner in Draft Day, in which he played an NFL draft prospect. In 2016, he starred as Thoth, a deity from Egyptian mythology, in Gods of Egypt. Boseman was one of the few actors of color featured in the film, which had drawn criticism for depicting a predominantly white cast playing Egyptian characters. Agreeing with the criticism, Boseman said it motivated him to accept the role to ensure one of the film's Egyptian deity would be of African descent.

Boseman began dating singer Taylor Simone Ledward in 2015. The two reportedly got engaged by October 2019, and they later married in secret, as revealed by Boseman's family in a statement announcing his death.

Boseman was diagnosed with stage III colon cancer in 2016, which eventually progressed to stage IV before 2020. He never spoke publicly about his cancer diagnosis, and according to The Hollywood Reporter, "[o]nly a handful of non-family members knew that Boseman was sick... with varying degrees of knowledge about the severity of [his] condition". During treatment, involving multiple surgeries and chemotherapy, he continued to work and completed production for several films, including Marshall, Da 5 Bloods, Ma Rainey's Black Bottom, and others. Boseman died at his home as a result of complications related to colon cancer on August 28, 2020, with his wife and family by his side.

In 2016, Boseman was diagnosed with colon cancer. Boseman kept his condition private, continuing to act while receiving treatment. He died in 2020 from complications related to the illness.

In 2016, he began portraying the Marvel Comics character T'Challa / Black Panther, with Captain America: Civil War being his first film in a five-picture deal with Marvel. He headlined Black Panther in 2018, which focused on the character and his home country of Wakanda in Africa. The film opened to great anticipation, becoming one of the highest-grossing films of the year in the United States. The role earned Boseman a spot on the 2018 Time 100 as one of the world's most influentual people, with Sean Combs writing his entry. He reprised the role in both Avengers: Infinity War and Avengers: Endgame, which were released in 2018 and 2019, respectively. Both films were the highest grossing of the year they were released, with Endgame going on to become the highest-grossing film of all time.

Boseman portrayed Thurgood Marshall in the biographical film Marshall in 2017. Set years before he became the first African American Supreme Court Justice, the movie focuses on one of Marshall's early cases. It was premiered at Howard University, which both Boseman and Marshall had attended.

In 2019, he starred in 21 Bridges, an American action thriller film directed by Brian Kirk, as an NYPD detective who shuts down the eponymous 21 bridges of Manhattan to find two suspected cop killers. It was also announced that Boseman was cast in the Netflix war drama film Da 5 Bloods, directed by Spike Lee. The film was released on June 12, 2020. Lee, in choosing Boseman for the divine-like character of "Stormin" Norman, said, "This character is heroic; he's a superhero. Who do we cast? We cast Jackie Robinson, James Brown, Thurgood Marshall, and we cast T'Challa."

On August 29, 2020, the day after Boseman died, the tweet in which his family announced his death on his Twitter account became the most-liked tweet ever, with more than 6 million likes in under 24 hours, and accumulating over 7 million by August 31, far displacing the previous record holder. His death was compared to other unexpected deaths of young black celebrities in 2020, particularly Kobe Bryant and Naya Rivera.

Governor of South Carolina Henry McMaster ordered the Statehouse flags be lowered to half-staff on August 30, 2020, in honor of Boseman, who was born and raised in the state. Also on August 30, ABC (which, like Marvel Entertainment, is owned by Disney) aired a commercial-free version of Black Panther, followed by a special about Boseman's life and work titled Chadwick Boseman — A Tribute for a King. The 2020 MTV Video Music Awards ceremony was also dedicated to Boseman. On August 28, 2020, a Change.org petition was started, seeking to replace a Confederate monument in his hometown of Anderson with a statue of Boseman, which collected more than 50,000 signatures within less than a week, surpassing its original goal of 15,000 signatures. On September 24, 2020, Disney unveiled a mural dedicated to Boseman by artist Nikkolas Smith at Downtown Disney in Anaheim, California.

A public memorial service was held on September 4, 2020 in Anderson, S.C., where Deanna Brown-Thomas, daughter of James Brown who Boseman portrayed in Get on Up, and his childhood pastor spoke. The city announced plans for creation of a permanent art memorial. Boseman was reported to have been buried at Welfare Baptist Church cemetery in the nearby community of Belton, S.C., however the funeral home handling his funeral services and the church pastor both denied this.