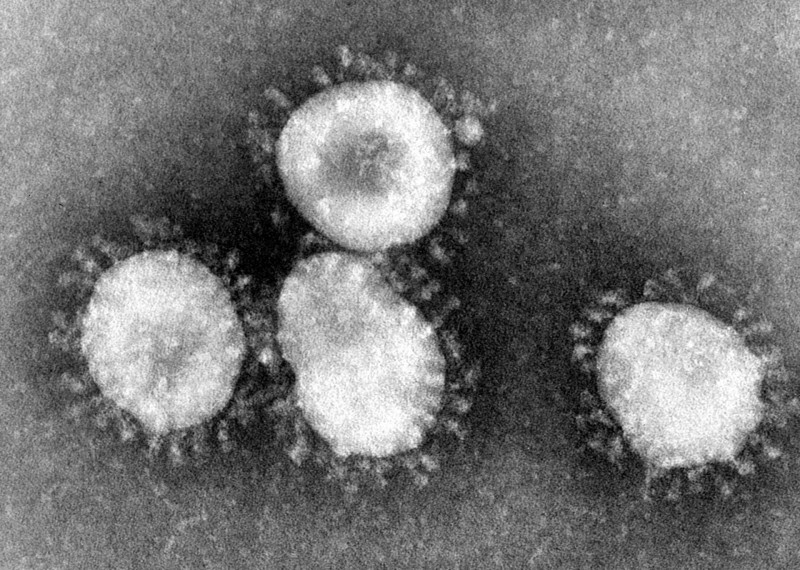 The earliest reports of an illness caused by a coronavirus occurred in the late 1920s, when an acute respiratory infection of domesticated chickens emerged in North America. 1 Arthur Schalk and M.C. Hawn in 1931 made the first detailed report which described a new respiratory infection of chickens in North Dakota. The infection of new-born chicks was characterized by gasping and listlessness with high mortality rates of 40–90%. Leland David Bushnell and Carl Alfred Brandly isolated the virus in 1933. The virus was then known as infectious bronchitis virus (IBV). Charles D. Hudson and Fred Robert Beaudette cultivated the virus for the first time in 1937. The specimen came to be known as the Beaudette strain. In the late 1940s, two more animal coronaviruses, JHM that causes brain disease (murine encephalitis) and mouse hepatitis virus (MHV) that causes hepatitis in mice were discovered. It was not realized at the time that these three different viruses were related.

Human coronaviruses were discovered in the 1960s using two different methods in the United Kingdom and the United States. E.C. Kendall, Malcolm Bynoe, and David Tyrrell working at the Common Cold Unit of the British Medical Research Council collected a unique common cold virus designated B814 in 1961. The virus could not be cultivated using standard techniques which had successfully cultivated rhinoviruses, adenoviruses and other known common cold viruses. In 1965, Tyrrell and Bynoe successfully cultivated the novel virus by serially passing it through organ culture of human embryonic trachea. The new cultivating method was introduced to the lab by Bertil Hoorn. The isolated virus when intranasally inoculated into volunteers caused a cold and was inactivated by ether which indicated it had a lipid envelope. Dorothy Hamre and John Procknow at the University of Chicago isolated a novel cold from medical students in 1962. They isolated and grew the virus in kidney tissue culture, assigning it as 229E. The novel virus caused a cold in volunteers and was inactivated by ether similarly as B814.

Scottish virologist June Almeida at St. Thomas Hospital in London, collaborating with Tyrrell, compared the structures of IBV, B814 and 229E in 1967. Using electron microscopy the three viruses were shown to be morphologically related by their general shape and distinctive club-like spikes. A research group at the National Institute of Health the same year was able to isolate another member of this new group of viruses using organ culture and named one of the samples OC43 (OC for organ culture). Like B814, 229E, and IBV, the novel cold virus OC43 had distinctive club-like spikes when observed with the electron microscope.

The name "coronavirus" is derived from Latin corona, meaning "crown" or "wreath", itself a borrowing from Greek κορώνη korṓnē, "garland, wreath". The name was coined by June Almeida and David Tyrrell who first observed and studied human coronaviruses. The word was first used in print in 1968 by an informal group of virologists in the journal Nature to designate the new family of viruses. The name refers to the characteristic appearance of virions (the infective form of the virus) by electron microscopy, which have a fringe of large, bulbous surface projections creating an image reminiscent of the solar corona or halo. This morphology is created by the viral spike peplomers, which are proteins on the surface of the virus.

Coronaviruses vary significantly in risk factor. Some can kill more than 30% of those infected, such as MERS-CoV, and some are relatively harmless, such as the common cold. Coronaviruses can cause colds with major symptoms, such as fever, and a sore throat from swollen adenoids. Coronaviruses can cause pneumonia (either direct viral pneumonia or secondary bacterial pneumonia) and bronchitis (either direct viral bronchitis or secondary bacterial bronchitis). The human coronavirus discovered in 2003, SARS-CoV, which causes severe acute respiratory syndrome (SARS), has a unique pathogenesis because it causes both upper and lower respiratory tract infections.

In 2003, following the outbreak of severe acute respiratory syndrome (SARS) which had begun the prior year in Asia, and secondary cases elsewhere in the world, the World Health Organization (WHO) issued a press release stating that a novel coronavirus identified by a number of laboratories was the causative agent for SARS. The virus was officially named the SARS coronavirus (SARS-CoV). More than 8,000 people were infected, about ten percent of whom died.

In September 2012, a new type of coronavirus was identified, initially called Novel Coronavirus 2012, and now officially named Middle East respiratory syndrome coronavirus (MERS-CoV). The World Health Organization issued a global alert soon after. The WHO update on 28 September 2012 said the virus did not seem to pass easily from person to person. However, on 12 May 2013, a case of human-to-human transmission in France was confirmed by the French Ministry of Social Affairs and Health. In addition, cases of human-to-human transmission were reported by the Ministry of Health in Tunisia. Two confirmed cases involved people who seemed to have caught the disease from their late father, who became ill after a visit to Qatar and Saudi Arabia. Despite this, it appears the virus had trouble spreading from human to human, as most individuals who are infected do not transmit the virus. By 30 October 2013, there were 124 cases and 52 deaths in Saudi Arabia.

In May 2015, an outbreak of MERS-CoV occurred in the Republic of Korea, when a man who had traveled to the Middle East, visited four hospitals in the Seoul area to treat his illness. This caused one of the largest outbreaks of MERS-CoV outside the Middle East. As of December 2019, 2,468 cases of MERS-CoV infection had been confirmed by laboratory tests, 851 of which were fatal, a mortality rate of approximately 34.5%.

In December 2019, a pneumonia outbreak was reported in Wuhan, China. On 31 December 2019, the outbreak was traced to a novel strain of coronavirus, which was given the interim name 2019-nCoV by the World Health Organization (WHO), later renamed SARS-CoV-2 by the International Committee on Taxonomy of Viruses.

As of 19 September 2020, there have been at least 953,482 confirmed deaths and more than 30,588,989 confirmed cases in the COVID-19 pandemic. The Wuhan strain has been identified as a new strain of Betacoronavirus from group 2B with approximately 70% genetic similarity to the SARS-CoV. The virus has a 96% similarity to a bat coronavirus, so it is widely suspected to originate from bats as well. The pandemic has resulted in travel restrictions and nationwide lockdowns in many countries.