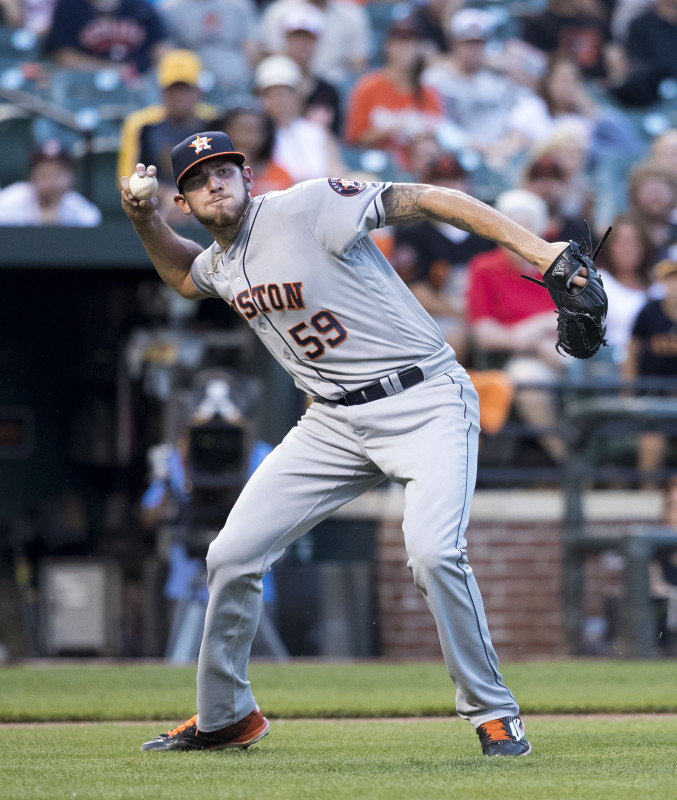 Joseph Anthony Musgrove (born December 4, 1992) is an American baseball pitcher with the San Diego Padres of Major League Baseball (MLB). He previously played for the Pittsburgh Pirates and the Houston Astros. Musgrove made his MLB debut with the Astros in 2016 and was part of their 2017 World Series-winning team. In 2021, Musgrove threw the first no-hitter in franchise history against the Texas Rangers, in his second start for the club.

On July 20, 2012, Musgrove was traded from the Blue Jays to the Houston Astros with Francisco Cordero, Ben Francisco, Asher Wojciechowski, David Rollins, Carlos Pérez and a player to be named later (Kevin Comer) in exchange for J. A. Happ, Brandon Lyon, and David Carpenter.

Musgrove was recalled by the Astros from Fresno on August 1, 2016. In 16 games between Corpus Christi and Fresno prior to his promotion, he was 7–4 with a 2.74 ERA. He made his major league debut on August 2 versus the Toronto Blue Jays, striking out eight over 4.1 innings while only allowing one hit. His first Major League strikeout victim was Edwin Encarnación. He spent the remainder of the season with the Astros, going 4–4 with a 4.06 ERA over 11 games (ten starts). Musgrove began 2017 with Houston, and spent the majority of the season there, pitching only one game with Fresno. In 38 games (15 starts) for the Astros in 2017, he was 7–8 with a 4.77 ERA.

On January 19, 2021, the Pirates traded Musgrove to the San Diego Padres in a three team trade that sent David Bednar, Omar Cruz, Drake Fellows, Hudson Head, and Endy Rodriguez to the Pirates and Joey Lucchesi to the New York Mets.

On April 9, 2021, Musgrove no-hit the Texas Rangers at Globe Life Field, the first no-hitter in the Padres' 52-year history. He threw 77 of 112 pitches for strikes and struck out 10 batters; a fourth-inning hit by pitch to Joey Gallo prevented Musgrove from achieving a perfect game.