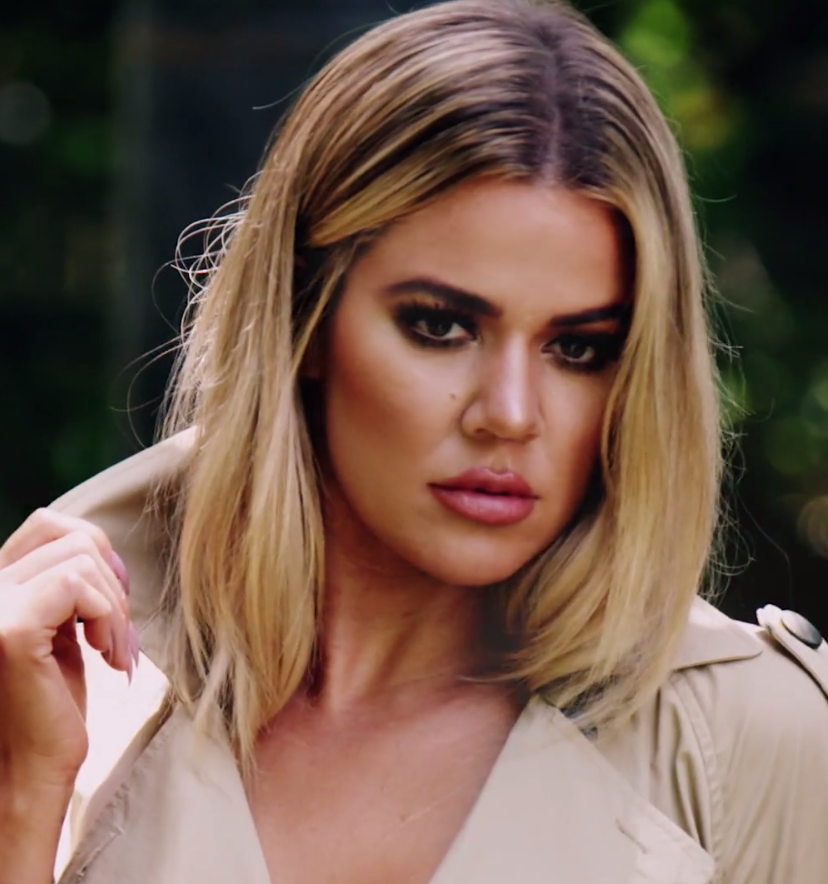 Khloé Alexandra Kardashian (born June 27, 1984) is an American media personality, socialite, and model. Since 2007, she has starred with her family in the reality television series Keeping Up with the Kardashians. Its success has led to the creation of spin-offs, including Kourtney and Khloé Take Miami (2009–2013) and Kourtney and Khloé Take The Hamptons (2014–2015).

Khloé Alexandra Kardashian was born in Los Angeles, California on June 27, 1984 to Kris (née Houghton), a homemaker, and Robert, an attorney. She has two older sisters, Kourtney and Kim, and a younger brother, Rob. Their mother is of Dutch, English, Irish and Scottish ancestry, while their father was a third-generation Armenian American. After her parents divorced in 1991, her mother married 1976 Summer Olympics decathlon winner Caitlyn Jenner (then Bruce ) in 1991. Through their marriage, Kardashian gained stepbrothers Burton "Burt", Brandon, and Brody; stepsister Casey; and half-sisters Kendall and Kylie. In 1994, her father garnered public attention as a defense lawyer for football player O. J. Simpson during his murder trial.

In 2001, Kardashian suffered a traumatic brain injury in a car accident. She went through the windshield and suffered a severe concussion, causing long-term memory loss.

In February 2007, a 2003 sex tape made by sister Kim Kardashian and her former boyfriend Ray J, Kim Kardashian, Superstar, was leaked, which contributed to the family's rise in popularity. Later that year, Khloé; her mother Kris; her stepfather Bruce; her siblings Kourtney, Kim, and Rob; and half-sisters Kendall and Kylie were commissioned to star in the reality television series Keeping Up with the Kardashians. The series and her sister Kim's popularity led to the Kardashians being able to cash in by endorsing products. These include waist-slimming pants, beauty products and Coca-Cola, for which they are paid (as of 2016) $75,000 per post on Instagram, Facebook and Twitter.

On March 4, 2007, Kardashian was arrested for driving under the influence. On July 18, 2008, she reported to jail to serve time for violation of probation. She faced a sentence of up to 30 days and enrollment in an alcohol treatment program within three weeks of her release from jail. She was released less than three hours later due to overcrowding.

From September 2009 to October 2016, she was married to basketball player Lamar Odom, who she married one month after they first met. They starred in their own reality television series, Khloé & Lamar (2011–2012). In 2009, Kardashian participated in the second season of The Celebrity Apprentice, finishing 10th of 16 candidates by being fired by Donald Trump. In 2012, she co-hosted the second season of the US adaptation of The X Factor with actor Mario Lopez.

In April 2009, Kardashian and her sister Kourtney announced that they were contracted to star in a spin-off that would follow their move to launch a D-A-S-H store in Miami, Florida. The series, Kourtney and Khloé Take Miami, debuted on E! on August 16, 2009. Starting May 29, 2009, Kardashian joined Miami Top 40 Mainstream outlet WHYI for a weekly four-hour talk/entertainment program, co-hosted by 106 & Park 's Terrence J. Khloé and her sisters Kim and Kourtney made a cameo appearance in the Season 3 premiere of the series 90210. Kardashian made an appearance in episodes 2, 4, and 8 of Kourtney and Kim Take New York, which premiered in January 2011. On April 10, 2011, Khloé & Lamar, Khloé's own show with her husband, Lamar Odom, debuted.

On September 27, 2009, Kardashian married professional basketball player Lamar Odom, who was a member of the Los Angeles Lakers at the time. The couple were married exactly one month after they met at a party for Odom's teammate Metta World Peace. Kardashian removed her middle name and took her husband's surname, becoming Khloé Kardashian Odom. Kardashian adopted a pet boxer named Bernard "BHops" Hopkins, after Bernard Hopkins, the boxer.

She is involved in the retail and fashion industries with her sisters Kourtney and Kim. They have launched several clothing collections and fragrances, and additionally released the book Kardashian Konfidential in 2010. They starred in their own short-lived reality television series, Dash Dolls (2015).

Kardashian's radio show, The Mix Up With Khloé Kardashian Odom, was a "one-hour, commercial-free show where Khloé will take requests, chat with her celebrity friends, and more during the Mavericks' season while she's in Dallas with her husband Lamar Odom." It aired on January 30, 2012. In October 2012, Kardashian and Mario Lopez were confirmed as the co-hosts of the second season of the American version of The X Factor. It was confirmed on April 22, 2013 that Kardashian will not return to co-host The X Factor for its third season. On March 26, 2014, E! announced a Keeping Up with the Kardashians spin-off series titled Kourtney & Khloé Take the Hamptons. The Hamptons follows Kourtney, Khloé, and Scott Disick as they relocate to The Hamptons while the girls work on the New York Dash store plus open a pop-up store. Since January 2016, Kardashian hosts the Kocktails with Khloé pop culture–themed variety talk show, which airs on the FYI cable channel. In 2015 she published a book titled Strong Looks Better Naked. In December 2018, Khloe Kardashian become the Brand ambassador of Burst Oral Care & performed corn test on the electric toothbrush.

In March 2012, Kardashian and her sisters Kourtney and Kim were named in a $5 million class-action lawsuit against QuickTrim, the weight-loss supplement they endorse. The complaint, filed in the United States District Court for the Southern District of New York, accuses the Kardashians (along with QuickTrim's manufacturer, Windmill Health Products; the retailer GNC; and others in the sales and marketing chain) of false and deceptive marketing of the diet aid. The plaintiffs, hailing from several states, brought claims under their respective states' consumer protection laws.

On December 13, 2013, after months of speculated separation, Kardashian filed for divorce from Odom and for legal restoration of her last name. Both parties signed divorce papers in July 2015. The divorce had yet to receive final approval from a judge in October 2015, when Odom was hospitalized after being found unconscious in a Nevada brothel. He was in a coma for four days; as he lay in a hospital, Kardashian withdrew her pending divorce petition. In an interview with People Magazine, Kardashian confirmed that they had not reconciled and the divorce had been withdrawn so that she could make medical decisions on Odom's behalf. Kardashian and Odom's divorce was finalized in December 2016.

Kardashian is a Christian and reads a daily devotional to herself and her "glam squad" every day. She is interested in theology and enjoys attending church. In April 2015 she was named godmother of her niece North West as the child was baptized in the Armenian Apostolic Church at the Cathedral of St. James in Jerusalem.

In 2016, she hosted her own talk show, Kocktails with Khloé, and stars in the health and fitness docu-series Revenge Body with Khloé Kardashian.

Kardashian was in a romantic relationship with basketball player Tristan Thompson. Kardashian gave birth to a daughter, True Thompson on April 12, 2018, amidst controversy after Thompson was found to have cheated on Kardashian during her pregnancy. In February 2019, Kardashian and Thompson split after it was revealed that Thompson had allegedly cheated on Kardashian with her younger half-sister Kylie Jenner's best friend Jordyn Woods.