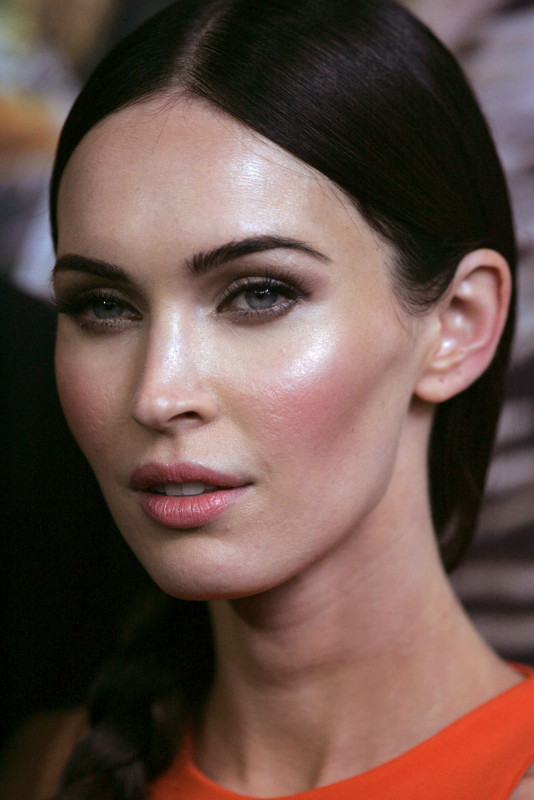 Megan Denise Fox (born May 16, 1986) is an American actress and model. She made her acting debut in the family film Holiday in the Sun (2001). This was followed by numerous supporting roles in film and television, as well as a starring role in the ABC sitcom Hope & Faith (2004–2006). Fox went on to make her feature film debut in the teen musical comedy Confessions of a Teenage Drama Queen (2004).

Megan Fox was born on May 16, 1986 in Oak Ridge, Tennessee, to parents Gloria Darlene (Cisson) and Franklin Thomas Fox. She spent her early childhood in nearby Rockwood. Fox's father, a parole officer, and her mother divorced when Fox was three years old. Her mother later remarried, and Fox and her sister were raised by her mother and her stepfather, Tony Tonachio. She was raised "very strictly Pentecostal", but later attended Catholic school for 12 years. She said that the two were "very strict" and that she was not allowed to have a boyfriend or invite friends to her house. She lived with her mother until she made enough money to support herself.

At 15, Fox made her acting debut in the romantic comedy Holiday in the Sun, as spoiled heiress Brianna Wallace and rival of Alex Stewart (Ashley Olsen), which was released direct-to-DVD on November 20, 2001. In the next several years, she guest-starred on the sitcoms What I Like About You and Two and a Half Men. Fox also appeared as an uncredited extra in the action film Bad Boys II (2003).

Fox began dating actor Brian Austin Green in 2004, after meeting on the set of Hope & Faith; she was 18 years old, while he was 30. According to Fox, Green was initially hesitant to enter a relationship with her due to the age difference, stating, "I had to convince him that I was slightly more responsible and well-spoken and had other things to bring to the table besides being 18." They became engaged in November 2006. In February 2009, they ended their engagement.

In 2004, she made her feature film debut opposite Lindsay Lohan in the musical comedy Confessions of a Teenage Drama Queen, playing the supporting role of Carla Santini, a rival of Lola (Lohan). Fox was also cast in a regular role on the ABC sitcom Hope & Faith, in which she portrayed Sydney Shanowski, replacing Nicole Paggi. Fox appeared in second and third seasons, until the series was cancelled by ABC in May 2006.

In 2007, Fox won the lead female role of Mikaela Banes in the 2007 live-action film Transformers, based on the toy and cartoon saga of the same name. Fox played the love interest of Shia LaBeouf's character Sam Witwicky. Fox was nominated for an MTV Movie Award in the category of "Breakthrough Performance", and was also nominated for three Teen Choice Awards. She had signed on for two more Transformers sequels, reprising her role as Mikaela in Transformers: Revenge of the Fallen. There was controversy surrounding Fox's appearance while filming the sequel when Michael Bay, the film's director, ordered the actress to gain ten pounds. The film was released worldwide on June 24, 2009 to box office success.

Chris Lee of the Los Angeles Times called Fox a "sex symbol of the highest order" and said she was "the first bona fide sex symbol of the 21st century." Craig Flaster of MTV stated, "Transformers broke Fox into the mainstream, immediately turning her into a household name and international sex symbol." She has been featured on various magazine covers and "hottest" and "most beautiful woman" lists throughout the years, such as Maxim's Hot 100 lists and when FHM readers voted her the "Sexiest Woman in the World" in 2008. People named her one of 2012's and 2017's Most Beautiful at Every Age. Scholar Marc DiPaolo stated that Fox achieved instant fame as Mikaela in Transformers because a "highly sexualized, erotically idealized figure draped over a car or motorcycle invariably evokes lust in the heterosexual male onlooker" and Fox did this by leaning over a Camaro while wearing "a flimsy pink belly shirt" and short skirt, which read as "an unequivocal sex invite" to male viewers. The editors of Men's Health also credited the Camaro scene with contributing to Fox's fame.

In 2009, Fox had her first lead role since the Transformers series; she portrayed the title character in Jennifer's Body, written by Academy Award–winning screenwriter Diablo Cody. The film initially earned mixed to average reviews upon its release, with Fox's performance earning praise. However, the film grew a cult following over time and was critically reassessed as a "forgotten feminist classic". According to Cody, the film was marketed incorrectly by executives who focused their efforts on the young male audience.

In 2009, Fox's public image came under scrutiny when an unsigned letter from three crew members of Transformers defended director Michael Bay against accusations made by Fox about his on-set behavior, including a comparison with Adolf Hitler. In response to the letter alleging that Fox's on-set behavior is unpleasant and contrasts her public persona, Bay stated he does not condone the letter or Fox's "outlandish quotes", but "her crazy quips are part of her crazy charm", and that they still work well together. A production assistant who worked on Transformers also stated that he never saw Fox act inappropriately on set. Fox said the letter's claims were false, and that she had privately spoken with the parties involved. She said she was "very fortunate" to be a part of the franchise, and was looking forward to continuing her work. DiPaolo concluded that Fox's criticism of the media sexually objectifying girls and women was in stark contrast to her sex symbol status and that this, "her defiance of director Michael Bay and frequent outspoken comments" stifled her career.

In April 2009, she began filming the western superhero film Jonah Hex, in which she portrayed Tallulah Black / Leila, a gun-wielding beauty and Jonah Hex's (Josh Brolin) love interest. The film was released on June 18, 2010. Despite receiving top billing, Fox described her role in the film as being a cameo. Jonah Hex was a critical and commercial failure in the U.S., with its international distribution cancelled after its poor performance. The film was named the "worst picture of the year" by the Houston Film Critics Society.

Fox was to star in the third installment, Transformers: Dark of the Moon, but was not included because of her statements comparing working under director Bay to working for Hitler. Bay said in June 2009 that Fox was fired on orders of executive producer Steven Spielberg, a claim Spielberg challenged.

Fox's overexposure in the media led several men's websites, such as AskMen, to boycott her on August 4, 2009, although some refused to do so, feeling that the boycott was a publicity stunt and therefore hypocritical. In response to the media attention, Fox told magazine Nylon, in September of that year, that "[the studio] wanted to make sure [the film] would make $700 million, so they oversaturated the media with their stars" and that she did not "want to have people get completely sick of [her] before [she's] ever even done something legitimate." She became much less prominent in the media by 2010, after starring in the less commercially successful films Jonah Hex and Passion Play. That same year, Fox said, "My biggest regret is that I've assisted the media in making me into a cartoon character. I don't regret what has happened to me, but I regret the way I have dealt with it." Dixon and Foster stated, "The problem [Fox] faces is that the [image] construct has replaced the real in the minds of the public; and once established, a media persona is hard to recalibrate."

Later that year, Fox was targeted by a group of fashion-motivated criminals known as the "Bling Ring", who robbed Green's home for access to Fox's possessions. Fox and Green were reported to have gotten engaged again on June 1, 2010, but Fox stated that she and Green had been continuously engaged since 2006.

Fox and Green married on June 24, 2010 in a private ceremony at the Four Seasons Resort on Maui. Fox filed for divorce on August 21, 2015, a few days after she and Green announced their separation. By early 2016, they were back together and expecting a third child. On April 25, 2019 Fox filed to dismiss the divorce in Los Angeles, California. In May 2020, it was announced the two had separated. Together, they have three sons: Noah Shannon Green (born 2012), Bodhi Ransom Green (born 2014) and Journey River Green (born 2016). Fox is also a stepmother to Green's son, Kassius (born 2002), from a previous relationship. In November 2020, Fox filed for divorce from Green for a second time.

In 2012, Fox appeared briefly in Sacha Baron Cohen's comedy film The Dictator and had a featured role in Judd Apatow's comedy film This Is 40. She voiced the role of Lois Lane in the animated comedy film Robot Chicken DC Comics Special, an episode of the television comedy series Robot Chicken that aired as a one-off special during Cartoon Network's Adult Swim programming block on September 9, 2012.

Fox has a form of brachydactyly called clubbed thumb, and has discussed her obsessive–compulsive disorder (OCD), insecurities, self-harming, and has acknowledged that she has low self-esteem. In 2013, she said that her Christian faith is still very important to her and she believes it keeps her grounded.

In January 2013, Fox was featured in a Brazilian television commercial for Brahma beer. In February 2013, Fox set aside her differences with her former director Michael Bay and worked again with him on his reboot of Teenage Mutant Ninja Turtles (2014), starring as the lead human character of April O'Neil.

In 2019, Fox starred in the mystery-fantasy film Above the Shadows opposite Olivia Thirlby and Alan Ritchson, directed by Claudia Myers. It was released on July 19, 2019, by Gravitas Ventures. That same year, Fox appeared in Zeroville directed by James Franco, which was previously shot in 2014. The film was panned by critics and performed poorly at the box office. In 2020, Fox starred opposite Josh Duhamel in the family comedy film Think Like a Dog, which was released on video on demand on June 9, 2020. Also that year, she starred in the lead role of the action film Rogue, which was released on August 28, 2020.

In 2015, Fox was cast in the role of Amelia Delthanis in the Plarium video game, Stormfall: Rise of Balur. In October 2015, it was confirmed that Fox would be temporarily replacing Zooey Deschanel in the television sitcom New Girl, following Deschanel's maternity leave. She starred as Reagan Lucas, appearing in the fifth and sixth seasons of the series. Her performance earned positive reviews from critics.

In 2016, Fox reprised her role of April O'Neil in the sequel Teenage Mutant Ninja Turtles: Out of the Shadows. On September 12, 2018, it was confirmed that Fox would star in the Korean War film The Battle of Jangsari, beside Korean actor Kim Myung-min. She played a lead role as Marguerite Higgins, an American news reporter.

Fox and Green are supporters of Generosity Water, and have funded the creation of over ten water wells for the organization. In May 2020, Green announced that he and Fox had separated after nearly 10 years of marriage. In June 2020, she and Machine Gun Kelly went public about their relationship, several weeks after the release of Machine Gun Kelly's song "Bloody Valentine", which featured Fox in the music video.