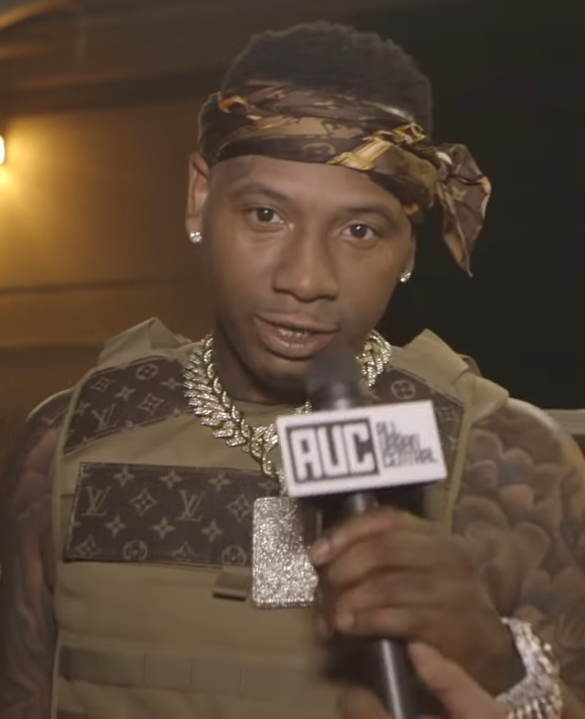 DeMario DeWayne White Jr. (born September 22, 1991), known professionally as Moneybagg Yo, is an American rapper from Memphis, Tennessee. He is signed to fellow Memphis rapper Yo Gotti's record label, Collective Music Group (CMG), in a joint venture deal with Interscope Records. His first two projects to debut in the Top 20, Federal 3X and 2 Heartless, debuted at No. 5 and No. 16 on the Billboard 200, respectively. His third album, Time Served, debuted at number 3 on the Billboard 200 in January 2020, while his fourth album, A Gangsta's Pain, was released in April 2021 and became his first chart-topping project.

His early mixtapes were issued in 2012, including From Da Block 2 Da Booth and October 20th. In 2016, he released three more, one of which won a Memphis Hip Hop Award for Mixtape of the Year. Federal Reloaded, a revision of the first installment of the Federal series, featured guest appearances from Y Grizzle, Young Dolph and OG Boo Dirty, among others. The follow-up, ELO (Everybody Lives On), included guest appearances from Yo Gotti and Migos' Quavo, among others. His work with Yo Gotti continued on a joint effort titled 2 Federal, released in October 2016. Heartless arrived in February 2017 and charted at No. 177 on the Billboard 200. The mixtape featured guest appearances from YFN Lucci and Lil Durk. In October 2017, Moneybagg released Federal 3X, his debut with Interscope since signing a distribution deal. The mixtape contains a sole feature from YoungBoy Never Broke Again.

In 2018, MoneyBagg Yo converted to Islam, taking his Shahada from rapper, Kevin Gates. He prays five times a day and he fasts during Ramadan.

In 2018, Moneybagg Yo delivered a compilation album: Moneybagg Yo Presents: NLess Ent x Bread Gang. The project was released on January 1, 2018. On February 14, 2018, Moneybagg released his sequel mixtape to 2017's Heartless, 2 Heartless with features from Quavo, Yo Gotti, Lil Baby, and BlocBoy JB and production from Zaytoven and Southside. On July 27, 2018, he released a nine-track mixtape, Bet On Me, with features from YoungBoy Never Broke Again, Lil Baby, and Gunna with the production handled from Tay Keith, Drum God, Javar and others. Moneybagg Yo released his debut studio album Reset in November 2018. He released his second studio album, 43va Heartless, in May 2019. His third studio album, Time Served, was released in January 2020. It includes "All Dat" and "U Played", his first Hot 100-charting singles. The album reached number three on the Billboard 200, with 66,000 units sold during its first week of release. It was followed up by a deluxe edition in May. On June 30, 2020, he released the single "Said Sum", his highest-charting song as a lead artist. After Moneybagg Yo and fellow rapper Blac Youngsta both announced they would be releasing their respective solo albums on a shared day of September 18, 2020, the rappers took this to social media two days before to announce they would instead release a collaborative mixtape titled Code Red. Moneybagg Yo also released a remix of "Said Sum", featuring American hip hop group City Girls and American rapper DaBaby, which is included on the mixtape.

Moneybagg Yo has eight children, four sons and four daughters. He dated fellow rapper Megan Thee Stallion, however they broke up in 2019; she appeared on his single "All Dat". As of January 2020, he is dating entrepreneur Ariana "Ari" Fletcher.

Moneybagg released his fourth studio album, A Gangsta's Pain, on April 23, 2021. It features guest appearances from Kaash Paige, Big30, Future, Polo G, Lil Durk, Jhené Aiko, and Pharrell Williams. The album became his first number-one project, debuting with 110,000 units on the Billboard 200, and returned to the top in its third week. On June 1, 2021, Moneybagg released the standalone single, "Rookie of the Year", an ode to basketball player Ja Morant.