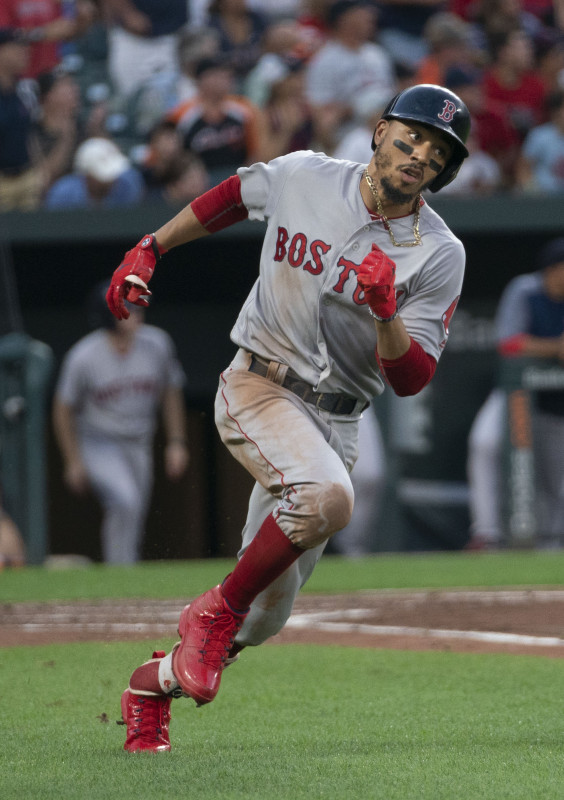 Markus Lynn "Mookie" Betts (born October 7, 1992) is an American professional baseball right fielder for the Los Angeles Dodgers of Major League Baseball (MLB). He previously played for the Boston Red Sox. In 2018, while with the Red Sox, he became the first player in MLB history to win the Most Valuable Player, Silver Slugger, Gold Glove, batting title, and World Series in the same season. Betts is regarded by many to be one of the best players of his generation as well as one of the best players in baseball.

Although it has been reported that Betts is a nephew of Terry Shumpert, who played parts of 14 seasons with several MLB teams, they are actually first cousins once removed, as Shumpert is a first cousin to Betts' mother, Diana. In 2004, Shumpert spent his final season of professional baseball with the Triple-A Nashville Sounds and worked extensively with Betts.

At Overton, Betts was also a standout basketball player, named MVP of the District 12-AAA league his senior season while averaging 14.1 points, 9 assists, 4 rebounds, and 3 steals per game; and also named Class AAA All-City Player of the Year for the Nashville, Tennessee metropolitan area. His junior year, Betts was named MVP of the District 12-AAA tournament. Betts also excelled in bowling, named the Tennessee boys Bowler of the Year in 2010 with a high score of 290. He grew up bowling at the Donelson Strike and Spare in Donelson, Tennessee.

In 2010, Betts's junior year at John Overton High School in Nashville, Betts batted .548 with 24 steals. In November that year, Betts signed a letter of commitment to attend the University of Tennessee on a baseball scholarship, also getting recruited by Vanderbilt University, Mississippi State University and the University of Alabama at Birmingham.

Mookie's mother is an avid bowler and taught Mookie to bowl at an early age. Betts was named the Tennessee Boys Bowler of the Year in 2010, having set Tennessee high school records that season with a 290 game and an 827 three-game series.

Betts was drafted by the Red Sox in 2011, and made his MLB debut in the 2014 season, splitting time between second base and the outfield. He became the Red Sox center fielder in 2014, before moving to right field in 2016. As a relatively short natural second baseman with a high contact rate and a high level of production when pulling the ball, Betts has been compared to former Red Sox teammate Dustin Pedroia.

By May 21, Betts had amassed a major league-leading 15 home runs. He led MLB in batting average, slugging percentage, OPS, total bases, extra-base hits, doubles, runs scored, runs created, and OPS+. He led Boston with 11 stolen bases, good for third in MLB. His 3.8 WAR (as calculated by Baseball-Reference.com) at that point was second only to Trout in the majors. His offensive success was a major factor in the Red Sox’ 32–15 start. On June 1, Betts was placed on the 10-day disabled list, retroactive to May 29, with a left abdominal strain; he returned to the active roster on June 11. On July 6, Betts hit his 22nd home run of the season, the 100th of his MLB career. He became the fourth Red Sox player to hit 100 home runs before turning 26, the others being Tony Conigliaro, Jim Rice, and Ted Williams. On July 8, while batting .343 with 22 home runs and 44 RBIs, Betts was named to the 2018 MLB All-Star Game as an American League starting outfielder. In a game against the Toronto Blue Jays on August 9, he hit for the cycle, becoming the 21st player in Red Sox franchise history to accomplish the feat. On September 26, Betts stole his 30th base of the season, becoming just the second player in Red Sox history to join the 30–30 club (the first was Jacoby Ellsbury in 2011).

The Boston Red Sox selected Betts in the 5th round of the 2011 Major League Baseball draft with the 172nd overall pick as a 2nd baseman. After protracted negotiations, Betts subsequently rescinded his commitment to the University of Tennessee, signing a $750,000 contract with the Red Sox organization. Betts played two games in 2011 for the GCL Red Sox of the rookie Gulf Coast League, getting two hits in four at bats. In 2012, he batted .267 and stole 20 bases in 71 games for the short season Lowell Spinners of the New York–Penn League. He played shortstop regularly, but looked more comfortable at second base.

In 2013 and 2014, Betts reached base in 66 straight regular-season games plus five playoff games for a combined streak of 71 games. Because official baseball streak records do not include playoff games, Betts's streak has been listed at 66 games; Kevin Millar and Kevin Youkilis hold the official minor league record for consecutive games reaching base, at 71 games, with Minor League Baseball lacking data on the statistic prior to 1997.

Since mid-May 2014, Betts has played outfield in addition to second base. In 2013, four-time All-Star second baseman Dustin Pedroia signed an eight-year, $110 million contract extension with the Red Sox, leading to speculation that the Red Sox would groom Betts for a new position.

Betts was promoted to the Red Sox on June 28, 2014. He had previously been selected for the All-Star Futures Game, but was replaced following his promotion to the Major Leagues.

Betts competed in the Professional Bowlers Association (PBA) World Series of Bowling in Reno, Nevada in 2015 and 2017.

Betts was named the AL Player of the Week for the week ending on June 21, 2015. Within that week, Betts batted .581 (18 for 31) with two home runs, two triples, three doubles, seven RBI and eight runs. He led the AL in batting average, hits, on-base percentage (.594), total bases (31), and slugging percentage (1.000) that week. In the latter part of the season, he spent some time in right field, leading to speculation that he would move there permanently to allow teammate Jackie Bradley, Jr., to take over in center field. Betts ended the 2015 season with a .291 batting average, with 92 runs scored, 77 RBIs, 18 home runs, and 21 stolen bases.

From September 12, 2016 through to April 19, 2017, Betts maintained a streak of 129 consecutive plate appearances without a strikeout. The streak ended when Francisco Liriano of the Toronto Blue Jays struck him out. In a regular season game at Toronto, he tied an MLB record when he recorded 8 RBIs from the leadoff slot in a 15–1 rout of the Blue Jays on July 2, 2017. He was granted his second American League All-Star Game selection on the same day. Originally chosen as a reserve, it was announced on July 3 that Betts will start in place of Mike Trout, who was out due to surgery on his thumb.

As a member of the Red Sox, Mookie Betts became known for his necklaces. Two in particular stood out, a gold chain and a bat-and-ball on a string. The chain was his father's that he says he never takes it off. The bat-and-ball was a gift from a Red Sox fan, 13-year-old Griffin Cantrell of Paducah, Kentucky. Cantrell wanted to give Betts a gift since fans often ask players for baseballs. He said the necklace was a good luck charm and his father bought a dozen at a cost of $6.67 each through an Arkansas man who makes acrylic duck-call necklaces. Cantrell gave Betts the necklace during Spring Training in 2018 prior to his AL Batting Championship, MVP Award and World Series championship. Betts continued wearing the modest bat-and-ball necklace after being traded to the Los Angeles Dodgers, a season which culminated in his second World Championship.

On April 17, 2018, Nick Cafardo of The Boston Globe published a column titled, "Mookie Betts or Mike Trout: Who gets the nod?" in which he compared Betts to Mike Trout, a then-two-time MVP widely considered the best player in baseball. Of the 10 professional evaluators Cafardo asked, seven chose Trout and three chose Betts. "To be in the same conversation as a great player like that is an honor," Betts said. That same night, Betts hit three home runs to lead the Red Sox to a 10–1 win over Trout's Los Angeles Angels. It was the third three-homer game of his career, tying him with Ted Williams for the most in Red Sox history. Betts broke the tie with Williams and set the franchise record on May 2, hitting three home runs in a 5–4 win over the Kansas City Royals. He became the first player in MLB history to produce four three-homer games before the age of 26.

His first child, a daughter, was born in November 2018.

For the season, Betts appeared in 150 games while batting .295 with a .915 OPS, 135 runs (leading the major leagues), 29 home runs, 80 RBIs, 40 doubles and 16 stolen bases in 597 at-bats. On defense in 2019, he had a 15 Defensive Runs Saved (DRS) rating, the best in the American League among right fielders, and had the best fielding percentage of all major right fielders (.997). After the season, Betts was awarded his fourth consecutive Gold Glove and his 3rd Silver Slugger. He finished eighth in 2019 AL MVP voting.

On February 10, 2020, the Red Sox traded Betts, David Price, and cash considerations to the Los Angeles Dodgers in exchange for Alex Verdugo, Connor Wong, and Jeter Downs. On July 22, the Dodgers signed Betts to a 12-year contract extension, through the 2032 season. The deal was worth $365 million and also included a $65 million signing bonus, making it the richest contract in Dodgers history, and the third-richest contract in the history of North American sports.

The 2020 season was delayed and shortened from 162 games to 60 due to the COVID-19 pandemic. On July 23, Betts was the starting right fielder, making his Dodgers debut on Opening Day against the San Francisco Giants, getting his first hit, a single, as a Dodger against pitcher Tyler Rogers. On July 31, Betts hit his first home run as a Dodger against Arizona Diamondback pitcher Zac Gallen. On August 14, Betts hit three home runs against the San Diego Padres, his sixth three-homer game of his career, tying Sammy Sosa and Johnny Mize as the only players in MLB history to accomplish this feat. Later that month, Betts hit two home runs and stole two bases against the Colorado Rockies, becoming only the 19th player—and first Dodger—to have a multi-homer, multi-steal game. On August 27, 2020, he reached 1,000 MLB career hits.