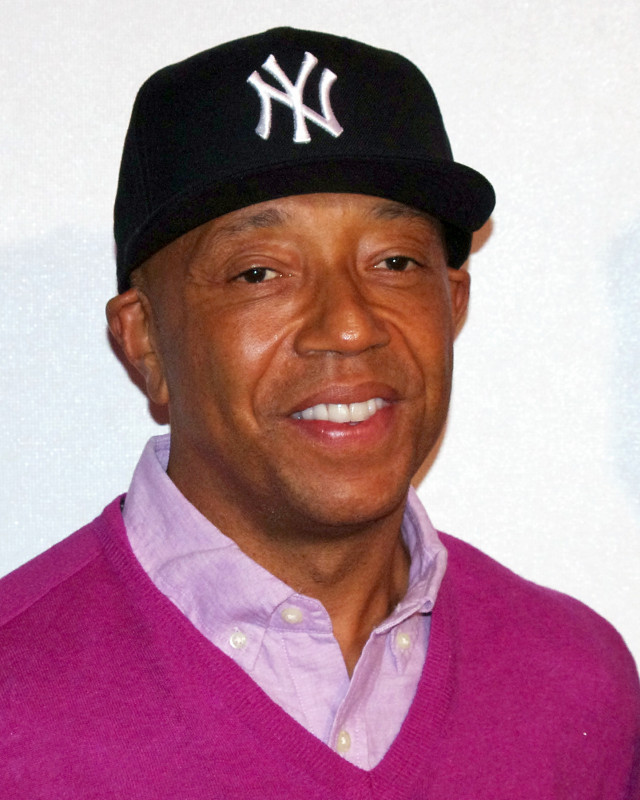 Russell Wendell Simmons was born in the Hollis neighborhood of New York City's Queens borough on October 4, 1957. He was raised in Maryland. His father was a public school administrator and his mother was a park administrator for the New York City Parks and Recreation Department. His brothers are painter Daniel Simmons, Jr. and Joseph Simmons (better known as Rev Run of Run-DMC fame). In 1975, after graduating from August Martin High School, Simmons briefly attended the City College of New York in Harlem where he met a young DJ/Bboy, Kurt Walker, who influenced him to participate in the hip hop phenomenon. Upon hearing Eddie Cheeba perform in Harlem in 1977, Simmons knew that hip hop would be his career. Simmons stated, "Hearing Cheeba in '77 made me feel like I had just witnessed the invention of the wheel."

In November 2017, model Keri Claussen Khalighi accused Simmons of sexually assaulting her in 1991, when she was 17. Simmons and Brett Ratner, who Khalighi accused of watching them without intervening when she asked for his help, both deny that the encounter was non-consensual.

On November 30, 2017, writer Jenny Lumet claimed that Simmons had assaulted her in 1991. In response, Simmons said he would step down from his positions with his businesses. On the same day, HBO announced that they would be removing Simmons' name and likeness from his stand-up comedy specials starting with the December 1 episode.

Simmons and model Kimora Lee met in November 1992. They married on December 20, 1998, on the island of Saint Barthélemy. They have two children, Ming Lee (born 2000) and Aoki Lee (born 2003). In March 2006, Simmons announced that he and Lee had ended their relationship; they officially divorced two years later.

Simmons and his brothers founded the Rush Philanthropic Arts Foundation in 1995. The purpose of the Foundation is to provide art education and support to under-serviced youth by helping people of color access the arts and by providing exhibition opportunities. The Foundation serves about 3,000 students annually and maintains two galleries. The Rush Arts Gallery in Chelsea, Manhattan and the Corridor Gallery in Clinton Hill, Brooklyn exhibit the work of more than 100 community and emerging artists.

Simmons became chairman of the board of the Foundation for Ethnic Understanding in 2002. In May 2009, he was appointed Goodwill Ambassador for the UN Slavery Memorial at the United Nations to honor the victims of slavery and the transatlantic slave trade by UN Secretary-General Ban Ki-moon. In a similar vein, Simmons is a supporter of the Somaly Mam Foundation, and was honored at their 2011 gala dinner. Simmons officially endorses the second Muslim Jewish Conference 2011. Together with Rabbi Marc Schneier he served as the official patron of the conference held July 2011 in Kiev, Ukraine. In 2011, he took part in the Occupy Wall Street protests, visiting the protesters at Zuccotti Park often and for many consecutive days.

In 2004, Simmons sold Phat Farm and Baby Phat to the Kellwood Company for $140 million.

In 2009, Simmons organized thousands of protestors and hip hop celebrities in front of City Hall demanding change of the harsh sentencing of the Rockefeller Drug Laws.

Simmons is a longtime supporter of gay rights, and he encourages marriage equality. In 2011, when the retail corporation Lowe's withdrew funding from the show All-American Muslim, Simmons promised to pay the Learning Channel for any revenue lost.

Despite his apology in 2013, the nature of shareable digital media has allowed the comedy video to continue to circulate on YouTube and around the web.

In August 2013, Simmons launched the controversial "Harriet Tubman Sex Tape" parody video on his YouTube channel, All Def Digital, which led to public outrage and many critics demanding an apology. The video featured an actress portraying the abolitionist Harriet Tubman (1820–1913) having sex with her slave owner with the intent of filming the act and blackmailing him to convince him to work on the Underground Railroad. Women from his own community, as well as filmmaker Spike Lee, were offended by the controversial comedy sketch.

In 2014, Claremont Lincoln University awarded Simmons an Honorary Doctorate Degree in Humane Letters for his work as chairman of the Foundation for Ethnic Understanding and for promoting mindfulness, compassion and interreligious collaboration in the public sphere.

In 2015, Simmons criticized his friend Donald Trump after Trump called for Muslim immigrants to be barred from entering the United States. In 2017, after becoming United States president, Trump implemented Executive Order 13769; this forcibly lowered the amount of immigrants from predominantly Muslim countries and led to more than 700 travelers being detained, as well as up to 60,000 visas being "provisionally revoked".

In 2017, Simmons was listed by UK-based company Richtopia at number 23 in the list of 200 Most Influential Social-Entrepreneurs and Philanthropists Worldwide.

After the third assault allegation was published in a guest column in The Hollywood Reporter on November 2017, by Jenny Lumet, Simmons stepped down from his roles in the label Def Jam Records, his yoga lifestyle brand, CNNMoney, and other media properties. Lumet, who is the daughter of filmmaker Sidney Lumet and the granddaughter of singer and civil rights activist Lena Horne, wrote: "As a woman of color, I cannot express how wrenching it is to write this about a successful man of color. ... I feel a pang to protect your daughters. I don't think you are inclined to protect mine."

On December 13, 2017, The Los Angeles Times published an investigative report in which five women accused Simmons of sexual misconduct, including an alleged rape. On the same day, The New York Times published the accounts of four other women who accused Simmons of inappropriate conduct, including three alleged rapes. In response to the allegations, Simmons stated he "never had a sexual encounter that was not consensual or lawful. Ever."

In 2018, it was reported that Simmons had sold off his assets, and transferred his accounts and moved to Bali, where there is no extradition treaty to the U.S. One of his rape accusers has publicly claimed that he has fled to avoid prosecution in her case.

On February 9, 2018, Simmons denied the allegations to Rolling Stone, saying (in part), "I vehemently deny all the allegations made against me. They have shocked me to my core as I have never been abusive or violent in any way in my relations with women. I am blessed to have shared extraordinary relationships, whether through work or love, with many great women and I have enormous respect for the women's movement worldwide and their struggle for respect, dignity, equality and power. I am devastated by any reason I may have given to anyone to say or think of me in the ways that are currently being described. I have separated myself from my businesses and charities to not become a distraction."

On April 25, 2018, Jennifer Jarosik, a filmmaker who alleged Simmons raped her, dropped her lawsuit. The suit was dismissed with prejudice, meaning Jarosik cannot refile allegations in court.

A documentary film about the sexual assault allegations against Simmons, On the Record, was released in January 2020. Oprah Winfrey withdrew as executive producer of the film, citing creative differences and stating that she was pressured by Simmons to abandon the project.