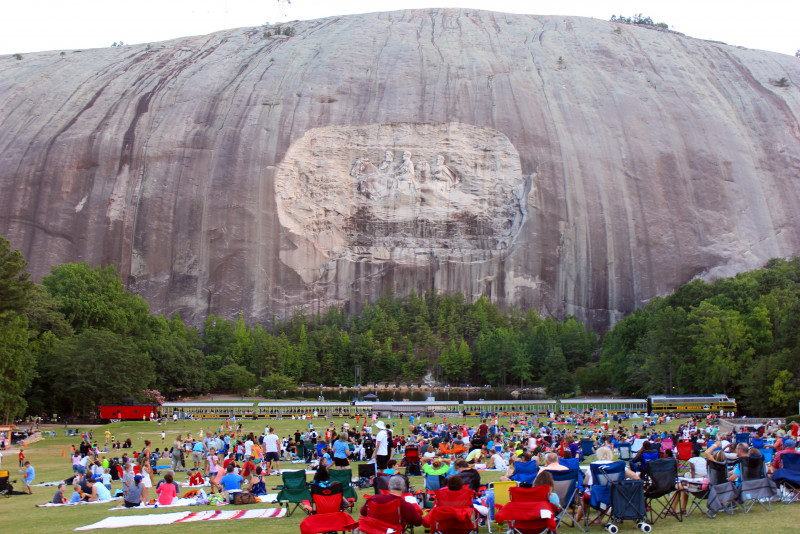 Europeans first learned of the mountain in 1567, when Spanish explorers were told of a mountain farther inland which was "very high, shining when the sun set like a fire." By this time, the Stone Mountain area was inhabited by the Creek and (to a lesser extent) Cherokee peoples.

In the early 19th century, the area was known as Rock Mountain. After the founding of DeKalb County and the county seat of Decatur in 1822, Stone Mountain was a natural recreation area; it was common for young couples on dates to ride to the mountain on horseback. The mountain is easy to climb and there has been a path since the nineteenth century.

Entrepreneur Aaron Cloud built a 165 feet (50 m) wooden observation tower at the summit of the mountain in 1838, but it was destroyed by a storm and replaced by a much smaller tower in 1851. Visitors to the mountain would travel to the area by rail and road, and then walk up the 1.1-mile (1.8 km) mountaintop trail to the top, where Cloud also had a restaurant and club.

Granite quarrying started at Stone Mountain in the 1830s, but became a major industry following the completion of a railroad spur to the quarry site in 1847. This line was rebuilt by the Georgia Railroad in 1869. Over the years, Stone Mountain granite was used in many buildings and structures, including the locks of the Panama Canal, the steps to the East Wing of the United States Capitol and the Imperial Hotel in Tokyo. In recent years, granite suppliers in Georgia sent stone samples cut from Stone Mountain to the Martin Luther King, Jr. Memorial Foundation to be considered for use in a planned monument in King's honor; the foundation later chose to use granite imported from China. Quarrying during earlier periods also destroyed several spectacular geological features on Stone Mountain, such as the Devil's Crossroads, which was located on top of the mountain.

The UDC established the Stone Mountain Confederate Memorial Association (SMCMA) for fundraising and on-site supervision of the project. Venable and Borglum, who were both closely associated with the Klan, arranged to pack the SMCMA with Klan members. The SMCMA, along with the United Daughters of the Confederacy, continued fundraising efforts. Of the $250,000 raised, part came from the federal government, which in 1925 issued special fifty-cent coins with the soldiers Robert E. Lee and Stonewall Jackson on them. The image on the verso of the coin was based on The Last Meeting of Lee and Jackson, executed in 1869 by Everett B. D. Fabrino Julio (American, b. St. Helena 1843 – 1879, emigrated to US 1860), itself an icon of Lost Cause mythology; it is now in the American Civil War Museum (until 2012 the Museum of the Confederacy). When the state completed the purchase in 1960, it condemned the property to void Venable's agreement to allow the Klan perpetual right to hold meetings on the premises.

Who first conceived of a Confederate memorial on the side of Stone Mountain has long been a matter of debate..... The written evidence...points to Francis Ticknor, a nineteenth-century physician and poet from Jones County, Georgia...in an 1869 poem.... William H. Terrell, an Atlanta attorney and son of a Confederate veteran, ...suggested it publicly on May 26, 1914 in an editorial for the Atlanta Constitution." Three weeks later, Georgian John Temple Graves, editor of the New York American, suggested it should have a 70-foot (21 m) statue of Robert E. Lee.

Venable deeded the north face of the mountain to the UDC in 1916, on condition that it complete a sizable Civil War monument in 12 years. Finances as well as technical problems slowed progress. The US Mint issued a 1925 Commemorative silver US half dollar, bearing the words "Stone Mountain", as a fundraiser for the monument. This issue, which required the approval of both the 1926 Congress and President Calvin Coolidge, was the largest issue of commemorative coins by the U.S. government up to that time.

Fundraising for the monument resumed in 1923. In October of that year, Venable granted the Klan easement with perpetual right to hold celebrations as they desired. The influence of the UDC continued, in support of Mrs. Plane's vision of a carving explicitly for the purpose of creating a Confederate memorial. She suggested in a letter to the first sculptor, Gutzon Borglum:

After a number of sculptors turned them down, Augustus Lukeman took up the work in 1925, with a different, smaller design. Fundraising was even more difficult after the public debate and name-calling, and work stopped in 1928. In 1941 segregationist Governor Eugene Talmadge formed the Stone Mountain Memorial Association (SMMA) to continue work on the memorial, but the project was delayed once again by the U.S. entry into World War II (1941–45).

Financial conflicts between Borglum and the Association led to his firing in 1925. He destroyed his models, claiming that they were his property, but the Association disagreed and had a warrant issued for his arrest. He was warned of the arrest and narrowly escaped to North Carolina, whose governor, Angus McLean, refused to extradite him, though he could not return to Georgia. The affair was highly publicized and there was much discussion and discord, including discord between Sam Venable, the Association, and its president Hollins Randolph. The face of Lee that Borglum had partially completed was blasted off the mountain in 1928.

According to George Weiblen's annotated calendar for Monday, May 7, 1928: "Mail plane crashed on mountain at 8:00 P.M." The pilot, Johnny S. Kytle (1905–1931), not only survived the crash, but managed to grab the mail and walk down the mountain.

In response to Brown v. Board of Education of 1954 and the birth of the Civil Rights Movement, in 1958, at the urging of segregationist Governor Marvin Griffin, the Georgia legislature approved a measure to purchase Stone Mountain at a price of $1.125 million. In 1963 Walker Hancock was selected to complete the carving, and work began in 1964. The carving was dedicated in a ceremony on May 9, 1970. The carving was completed by Roy Faulkner on March 3, 1972. Faulkner in 1985 opened the Stone Mountain Carving Museum (now closed) on nearby Memorial Drive commemorating the carving's history. An extensive archival collection related to the project is now at Emory University, with the bulk of the materials dating from 1915 to 1930; the finding aid provides a history of the project, and an index of the papers contained in the collection.

Stone Mountain Park officially opened on April 14, 1965 – 100 years to the day after Lincoln's assassination. Four flags of the Confederacy are flown at the site. The Stone Mountain Memorial Lawn "contains...thirteen terraces — one for each Confederate state.... Each terrace flies the flag that the state flew as member of the Confederacy."

Stone Mountain was once owned by the Venable Brothers, "as a memorial to the Confederacy." Stone Mountain Park officially opened on April 14, 1965 – 100 years to the day after Lincoln's assassination, although the park had already been in use for a few years. By 2015, it was the most visited destination in the state of Georgia.

Around dusk on September 16, 2003, in clear weather, a small airplane circled the mountain five times, crashed headlong into the south side, burst into flames. The pilot was killed. A witness testifying at the NTSB investigation stated that the pilot, a 69-year-old accountant, had threatened on multiple occasions to commit suicide by flying into the mountain. The official NTSB accident report lists the probable cause as "The pilot's intentional flight into the ground for the purpose of suicide while impaired by alcohol."

On October 11, 2015, The Atlanta Journal-Constitution reported the park is considering a proposal of a permanent "Freedom Bell" honoring Martin Luther King, Jr. and the line "Let freedom ring from Stone Mountain of Georgia" as part of King's "I Have a Dream" speech of 1963. The proposed monument is inspired by a bell-ringing ceremony held in 2013 honoring the 50th anniversary of King's speech. It is not supported by the NAACP or King-founded Southern Christian Leadership Conference (SCLC), who want the Confederate symbols removed. Advance Local reported in 2015 that both the DeKalb County branch of the NAACP and the Sons of Confederate Veterans were opposed to the bell because it would have been put next to a Confederate monument. Representatives of the NAACP were quoted by the article saying "It's an attempt to gain support from blacks to keep these racist and demeaning symbols."

In August 2017, after the Unite the Right rally in Charlottesville, Virginia—a white nationalist protest against the removal of the statues of Robert E. Lee and General Stonewall Jackson—turned violent, many people across the country again demanded the removal of many Confederate monuments and memorials as a part of a national political debate. Georgia State Representative and Democratic gubernatorial candidate Stacey Abrams called for the removal, by sandblasting, of Stone Mountain's carving. She called it "a blight upon our state".

Crossroads is a recreation of an 1872 southern town with several attractions that include a modern 4-D movie theater, an adventure mini-golf course, a duck tour ride. The duck boats have been replaced by the Rockin’ Land and Lake Tour in 2019 due to several deaths in other locations caused by duck boat accidents. The tour includes a ride on a double decker open top bus and a pontoon boat ride at the marina.) stores and restaurants. Craft demonstrators include glass blowing and candy-making.

On July 5, 2020, 100 to 200 protesters, many carrying large rifles, called for the carving's removal. Known as the Not Fucking Around Coalition (NFAC), it was a protest against both overt and systemic racism, calling out white supremacists, with the location being chosen in part due to its history as the place where the Ku Klux Klan was re-formed.