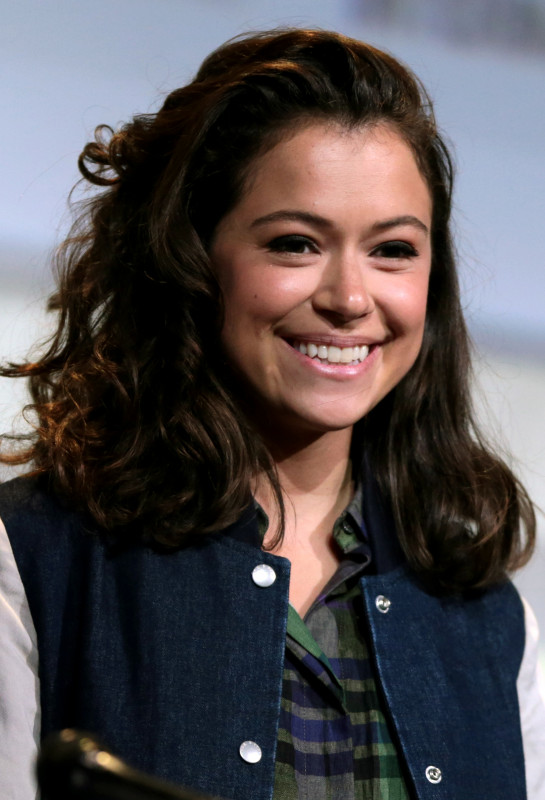 Tatiana Gabriele Maslany (/məˈslɑːni/; born September 22, 1985) is a Canadian actress. She rose to prominence for playing multiple characters in the science fiction thriller television series Orphan Black (2013–2017), which won her a Primetime Emmy Award (2016), a TCA Award (2013), two Critics' Choice Awards (2013 and 2014), and five Canadian Screen Awards (2014–18). Maslany is the first Canadian to win an Emmy in a major dramatic category for acting in a Canadian series.

Maslany attended Dr. Martin LeBoldus High School, where she participated in school productions and improvisation, and graduated in 2003. While attending high school, she found paying acting jobs that allowed her to travel all over Canada with her parents' approval. She would work for a few months at a time and then return to school in Regina. She stated, "It wasn't an easy transition. I felt a little outside of it. Outside of both experiences, really."

In 2007, Maslany appeared in The Messengers as Lindsay Rollins. She also starred in the CBC series Heartland where she plays a barrel racer, Kit Bailey, with her horse Daisy. During 2008, she had a recurring role in the Instant Star TV series. She had a lead role in the Hallmark Channel film An Old Fashioned Thanksgiving. In September 2008, she portrayed Penny, a kidnapping victim in the Canadian series Flashpoint.

Maslany appeared as Sarah Wexlar, the heroin-addicted daughter of Dr. Tom Wexlar in the second season of the Canadian comedy drama television series Being Erica in 2010. Also in 2010, she appeared as the protagonist Mary, the mother of Jesus, in the British four-part television series The Nativity, which was critically well received.

Maslany appeared in Grown Up Movie Star as Ruby, a role which earned the actor a special jury breakout role award at the 2010 Sundance Film Festival. She played Hannah Simmons in one episode of The Listener. In 2010, she appeared in the direct-to-video film Hardwired as Punk Red. In late 2011, she co-starred in the film adaptation of John Sandford's Certain Prey as Clara Rinker, a contract killer. In 2012, Maslany appeared as lead character Claire in the full-length feature Picture Day, for which she won a Phillip Borsos Award for Best Performance at the 2012 Whistler Film Festival.

In 2013, Maslany guest starred on Parks and Recreation for a two-episode arc as Dr. Nadia Stasky. She portrayed the lead character Dylan in the independent film Cas and Dylan, for which she won a Phillip Borsos Award for Best Performance at the 2013 Whistler Film Festival.

On June 11, 2013, Maslany signed with the US talent agency Resolution, which serves as her United States representation. In Canada, she continues to be managed by Magnolia Entertainment and represented by Characters Talent Agency. The 2013 Juno Award ceremonies were held in Regina, Maslany's home town, and Maslany was chosen as one of the presenters.

From 2013 to 2017, Maslany starred in the BBC America and Space original series Orphan Black. She plays the lead character, Sarah Manning, as well as Sarah's cohort of clones: Cosima Niehaus, Alison Hendrix, Helena, Rachel Duncan, Elizabeth Childs, Krystal Goderitch, Veera "M.K." Suominen, Katja Obinger, Jennifer Fitzsimmons and Tony Sawicki. Maslany won two Critics' Choice Television Awards and one TCA Award for her performance in the series. She was also nominated for a Golden Globe Award for Best Actress and in 2015 received a nomination for an Emmy Award for her performance. She was again nominated in 2016 and won the category. Maslany received a nomination for Best Lead Actress in a Drama Series at the 7th Critics' Choice Television Awards, her third total nomination from the Broadcast Television Journalists Association. In 2014, The Guardian praised Maslany's performance in the series, calling it "Olympic-level acting", writing:

On May 17, 2014, Maslany guest starred on the season 39 finale of Saturday Night Live. She played the character Bridget in the episode's second digital short entitled "Hugs". She guest starred alongside Pharrell Williams and The Lonely Island.

Maslany starred in the independent film The Other Half. The film, written by Joey Klein, was produced by Motel Pictures with A71 and Sienna Films and co-stars her then partner Tom Cullen. It had its world premiere at South by Southwest on March 12, 2016. Maslany played the leading role of Lucy in the 2016 indie drama film Two Lovers and a Bear, starring alongside Dane DeHaan as Roman. The film follows the two characters as they come together in Apex, Iqaluit to find peace in their lives.

Maslany was cast as a series regular in Ryan Murphy's 2018 drama series Pose, but was later replaced by Charlayne Woodard. She starred alongside Nicole Kidman in the crime thriller film Destroyer, which had its world premiere at the Telluride Film Festival in August 2018. She next starred alongside Bryan Cranston in the Broadway production of Network in 2019. Maslany starred as Sister Alice, alongside Matthew Rhys, in the HBO period drama miniseries Perry Mason, which premiered in June 2020.