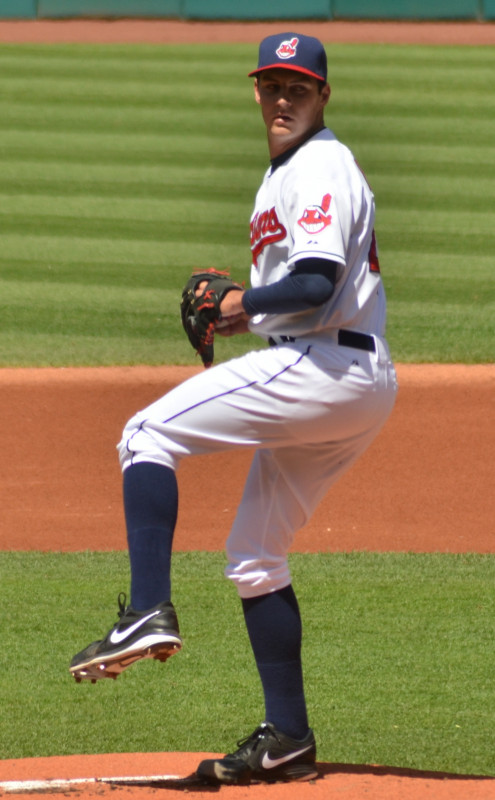 Bauer was a member of the USA 2009 Baseball Collegiate National Team. He was 1–1 with a 4.67 ERA in five games (three starts), with 24 strikeouts and seven walks in 17+1⁄3 innings. In 2009, he was named to the Baseball America freshman All-America team.

During the 2010 season, the Bruins had the best record (51–17) in school history and were the second-best team in the country. The Bruins played in the 2010 College World Series and were defeated by South Carolina in the NCAA Championship Series. In 2010, he was a finalist for the Golden Spikes Award, presented annually to the top amateur baseball player in the country by USA Baseball.

Bauer played college baseball for the UCLA Bruins, winning the Golden Spikes Award in 2011. He was the third overall selection of the 2011 Major League Baseball draft by the Diamondbacks, and made his MLB debut in 2012. The Diamondbacks traded him to the Indians during the 2012–13 offseason. The Indians traded him to the Reds before the trade deadline in the 2019 season. In 2020, Bauer was the NL ERA leader and won the Cy Young Award. In 2021, he signed a three-year deal with the Dodgers.

In four starts at AA Mobile, Bauer pitched 16+2⁄3 innings, striking out 26, but walked eight batters and had a 7.56 ERA. He received his first win as a professional August 20, 2011 in a 13–6 victory over the Jacksonville Suns. He was named to appear in the 2012 All-Star Futures Game.

Bauer made his major league debut for the Diamondbacks on June 28, 2012, against the Atlanta Braves. He went four innings, struck out three batters, and gave up five hits in a no-decision. He got his first major league win on July 8, against the Los Angeles Dodgers.

On July 18, 2012, Bauer was optioned back to Triple-A Reno Aces after posting a 1–2 record and a 6.06 ERA. The organization rested Bauer for two weeks to keep his arm lively, and he responded by posting six shutout innings in his first start back on August 6.

On December 11, 2012, he was traded to the Cleveland Indians in a three-team deal. Bauer went to Cleveland with Matt Albers and Bryan Shaw in exchange for Didi Gregorius, Tony Sipp and Lars Anderson. The Indians also acquired Drew Stubbs in a deal that sent Shin-Soo Choo and Jason Donald to Cincinnati to complete the deal.

On June 16, 2015, Bauer got his first hit as a batter against the Chicago Cubs' pitcher Jake Arrieta in the top of the 5th inning at Wrigley Field. During the July 3, 2015, game against the Pittsburgh Pirates' pitcher Antonio Bastardo, Bauer imitated his teammates' batting stances (Jason Kipnis, Mike Avilés and Ryan Raburn) in the top of the 7th inning and drew a walk. In 2015, he was 11–12 and had the highest rate of bases on balls per 9 innings pitched in the majors (4.04). He led the American League in walks, with 79, and his 12 losses were 7th-most in the AL.

A keen collector of drones, Bauer sliced and injured his right pinky finger while repairing a drone in October 2016, a few days before he had a scheduled postseason start, and he needed 10 stitches to close the wound caused by one of the drone's propellers. His injury forced his pitching start in the 2016 American League Championship Series to be pushed back from Game 2 to Game 3. Bauer had to leave after the first inning of Game 3, however, when the stitches used to treat his cut failed and the cut opened up. In the subsequent World Series against the Chicago Cubs, Bauer was the losing pitcher in both of his starts, which came in Games 2 and 5. The Cubs won the series in seven games.

Bauer ended the 2017 season with a 17–9 record, and a 4.19 ERA. On October 5, 2017, in Game 1 of the American League Division Series, Bauer pitched 51⁄3 innings against the New York Yankees without giving up a hit, setting a new Indians postseason record.

In 2018 he was named an all star. On August 11 he took a line drive off José Abreu, causing a stress fracture and sidelining him for a month. Bauer never started a game again that season, making only 3 relief appearances. In the Postseason, Bauer went 0–1, with a 6.75 ERA in three relief appearances. Overall, Bauer ended the year with a 12–6 record, and a 2.21 ERA.

Starting in the 2018 season, Bauer launched his 69 Days of Giving campaign. In 2018, Bauer donated $420.69 to 68 different charities and capped it off by donating $69,420 to Max S. Hayes High School. The school is located minutes away from Progressive Field where the Indians play and focuses on technical and trade education.

Bauer has voiced his opposition to the theory of anthropogenic global warming. On May 22, 2018, Bauer was accused of carving BD 911 into the pitcher's mound, a reference to a conspiracy theory that indicated "Bush did 9/11". Bauer later wrote on Twitter that he wrote BD 91.1 and that the numbers and letters were meaningful to him personally and completely unrelated to the September 11 attacks.

In 2019 Bauer and his business partner Taiki Green founded sports media company Momentum. It's the first-ever player-led media company credentialed by Major League Baseball and has produced popular series like Bauer Bytes and Live At Bats. During the 2020 season, Bauer vlogged his experience during the shortened 2020 season, with the series being called Inside the COVID Season With Trevor Bauer. He is also vlogging his Free-Agent offseason, in a series named Inside The Offseason with Trevor Bauer.

On April 4, 2019, Bauer pitched seven no-hit innings against the Toronto Blue Jays, recording eight strikeouts, six walks, and one hit by pitch. On July 28, after allowing seven earned runs to the Kansas City Royals, Bauer threw a baseball out of frustration from the pitcher's mound over the centerfield wall, after seeing his manager Terry Francona walk out from the dugout to take him out of the game. Bauer later apologized for the incident, calling his actions "childish" and "unprofessional".

On July 31, 2019, the Indians traded Bauer to the Cincinnati Reds in a three-team trade that also included the San Diego Padres. The Indians acquired Franmil Reyes, Logan Allen, and minor leaguer Victor Nova from the Padres and Yasiel Puig and minor league pitcher Scott Moss from the Reds, while the Padres acquired minor leaguer Taylor Trammell from the Reds. Bauer wore "J Ochart" on his Players' Weekend jersey after losing a bet in the offseason with Jason Ochart, a hitting instructor at Driveline Baseball and hitting coach with the Philadelphia Phillies. Bauer ended the season with an 11–13 record and a 4.48 ERA.

On February 11, 2021, Bauer signed a three-year, $102 million contract with the Los Angeles Dodgers that contains opt-outs after each of the first two seasons.