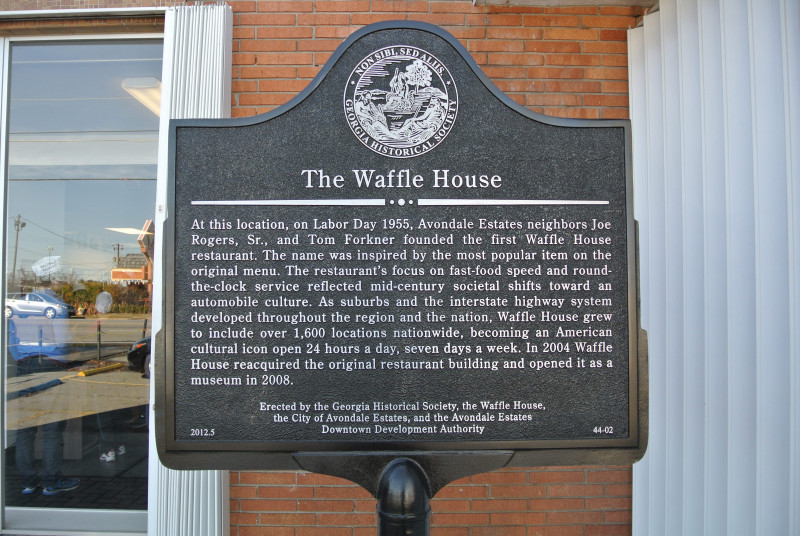 The first Waffle House opened on Labor Day weekend in 1955 at 2719 East College Avenue in Avondale Estates, Georgia. That restaurant was conceived and founded by Joe Rogers Sr. and Tom Forkner. Rogers started in the restaurant business as a short-order cook in 1947 at the Toddle House in New Haven, Connecticut. By 1949, he became a regional manager with the now-defunct Memphis-based Toddle House chain, then he moved to Atlanta. He met Tom Forkner while buying a house from him in Avondale Estates.

Rogers continued to work with Toddle House, and to avoid conflict of interest, sold his interest to Forkner in 1956. In 1960, when Rogers asked to buy into Toddle House, and they refused, he moved back to Atlanta and rejoined Waffle House, now a chain of three restaurants, to run restaurant operations. Shortly after Joe returned full-time, Tom followed suit and left Ben S. Forkner Realty.

After opening a fourth restaurant in 1960, the company began franchising its restaurants and slowly grew to 27 stores by the late 1960s, before growth accelerated. The founders limit their involvement in management, and as of 2013 , Joe Rogers Jr. was CEO and retired late 2013, and Bert Thornton is president.

In 2004, in response to a serious Salmonella problem in 2003 at a Chili's location in Vernon Hills, Illinois, and by four deaths in 1993 from E. coli in undercooked hamburger at a Jack in the Box, the television news magazine Dateline NBC investigated sanitation practices of popular American family restaurant chains, measuring the number of critical violations per inspection. The Waffle House averaged 1.6 critical violations per inspection. Waffle House's response to the study pointed out that they prepare all meals in an open kitchen, and consumers can readily observe their sanitation practices themselves.

The chain's restaurants almost always have jukeboxes, which have traditionally played 45-rpm singles and, in some cases, CDs. Waffle House has released music through its own record label, Waffle Records. It has released songs from "Saturday Night At My Place" by Gary Garcia released in 1995 to "They're Cooking Up My Order" by Alfreda Gerald released in 2006. The co-founder Joe Rogers had high standards and said, "If it sounded like a commercial, it got the ax." If the song makes the cut it'll be recorded and make its way to Waffle House jukeboxes. The songs are on ordinary discs, which are produced for Waffle House and are not commercially sold, but the chain has made a CD of some of the songs available for sale.

In 2007, Waffle House repurchased the original restaurant, which was sold by the chain in the early 1970s. The company restored it using original blueprints for use as a private company museum. The museum is used primarily for internal corporate events and tours.

Other shootings have taken place in Waffle House locations in New Albany, Indiana; Ohio; North Carolina; and Mississippi in 2017 and in Florida, Louisiana, and Missouri in 2018.

The founders of the Waffle House brand died in 2017 within less than two months of each other: Joe Rogers Sr. died on March 3 and Tom Forkner on April 26.

In 2018, there were two incidents at Waffle Houses where the employees called the police on unarmed African-American customers and the police deployed force against them. One 22-year-old wearing a tuxedo was choked by police officers, and another young woman was aggressively held down by police, revealing her breasts. This came at a time of heightened sensitivity over a number of incidents where police were called over customers of African-American background, at Starbucks and other locations in the United States.

Waffle Houses have been the site of several shooting incidents. On April 22, 2018, in Nashville, Tennessee, a partially naked gunman armed with an AR-15 style rifle killed four people in the Nashville Waffle House shooting before he was disarmed by patron James Shaw Jr. and escaped. The shooter, 29-year-old Travis Reinking, was captured after a day-long manhunt.

On October 29, 2018, a rapper known as Young Greatness was shot to death outside a Waffle House in New Orleans. He was 34 years old.

On September 17, 2019, customers who ate at a Waffle House in Goose Creek, South Carolina, were exposed to Hepatitis A. One of the employees who had worked there tested positive for Hepatitis A. After upper management found out, they immediately shut down the Goose Creek Waffle House location to sanitize the facility. DHEC officials said they would be working with Waffle House to investigate possible exposures and provide guidance for preventive treatment for anyone who may be affected.

According to Waffle House's website as of August 2022, its number of locations per state consists of the following: