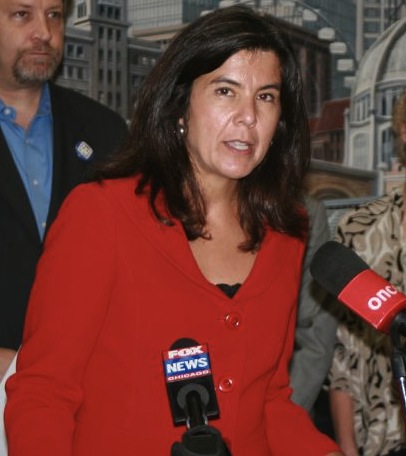 Anita M. Alvarez (born January 16, 1960) is the former State's Attorney for Cook County, Illinois, United States. Alvarez was the first Hispanic woman elected to this position, after being the first Latina to win the Democratic nomination for state's attorney of Cook County.

A Chicago native, Alvarez was born and raised in the Pilsen neighborhood. She attended Maria High School and received her undergraduate degree from Loyola University of Chicago in 1982. She earned her J.D. degree from Chicago-Kent College of Law in 1986.

Alvarez was promoted to the Supervisor of the Public Integrity Unit in 1996, where she was responsible for prosecuting city, county, and state employees who committed felonies and violated the public trust. She claimed to have tried police officers on corruption charges. In 1999, she was promoted to Deputy Chief of the Narcotics Bureau where she supervised the prosecution of drug cases as well as long-term narcotics investigations in conjunction with Chicago and suburban police departments.

Alvarez defended Cook County Assessor Joseph Berrios in a suit against Berrios filed in 2001 by Cook County Inspector General Patrick Blanchard. Blanchard was seeking a response from Berrios to a subpoena requesting documents related to a manager in Berrios' office obtaining two exemptions intended for a primary residence. Berrios ignored the subpoena, claiming that the County Inspector General had no authority over him.

In 2001, Alvarez tried the case of the People of the State of Illinois v. Patrick Sykes, which was referred to in the media as the "Girl X Case". Alvarez's successful prosecution of Sykes resulted in his conviction for the predatory criminal sexual assault of a 9-year-old girl who was left paralyzed, blind, without speech and confined to a wheelchair after the brutal attack in the Cabrini Green housing project. Alvarez was elected Cook County State's Attorney in 2008. She was the first female, first Hispanic and first career prosecutor ever elected to this position.

Another controversial case was a Wicker Park shooting of a homeless man, Sammy Tate, involving two falsely accused black minors. Alvarez approved the keeping of a 16-year-old minor (Deandre Washington) in solitary confinement in Cook County Jail for 4 years pending trial. The trial lasted 45 minutes in 2003 where both defendants were acquitted. Alvarez also refused to resign when asked, yet settled suit against the city in 2012 for malicious prosecution by local Cochran offices for $1 million. Additionally, Alvarez had no response when asked why she kept a minor in solitary for so long. At a 2018 Chicago City Club event, Alvarez's then-press agent still defended the ex-Cook County State's Attorney for not knowing how many minors were kept in solitary confinement during her term in office.

Alvarez was elected Cook County State's Attorney in 2008. She won reelection in 2012. She ran for reelection again in 2016, but was defeated in the primary election by Kim Foxx.

In 2009, Chris Drew recorded his non-violent arrest for street peddling of art. The peddling charge was dropped and Alvarez pursued the much harsher charge of recording police officers' voices without their permission.

In 2010, Tiawanda Moore sought to file a complaint against a police officer for groping her, and secretly recorded an interview with investigators on her smartphone, on the grounds that they were trying to intimidate her. Alvarez charged her with a Class 1 felony eavesdropping. Moore was acquitted in 2011, with one juror saying that the trial had been "a waste of time".

Alvarez was reelected to a second term as Cook County State's Attorney in 2012 after defeating Republican challenger Lori Yokoyama. Alvarez won 77% of the vote.

Judge Stanley Sacks dismissed Drew's case on March 2, 2012, stating the eavesdropping law was unconstitutional and that it was too broad and criminalized innocent behavior. Alvarez announced she would appeal the ruling. The American Civil Liberties Union of Illinois successfully sued Alvarez and she was ordered to cease prosecuting ACLU employees and their agents under the Illinois Eavesdropping Act.

In 2013, Alvarez's office charged Dante Servin, the police officer who shot Rekia Boyd, with involuntary manslaughter. In 2015, Servin was cleared of all charges by the presiding judge, who pointed to the inconsistent charges as the reason for his decision. Alavarez was heavily criticized for undercharging Servin, and his consequent acquittal, which some critics alleged was an attempt by Alvarez to curry favor with the police department.

In 2013, during a routine review of his case, she concluded that Lathierial Boyd, a man who had already served 23 years for murder, should never have been charged.

The video shows officer Jason Van Dyke shooting a black teenager 16 times as the teenager walks away. Based on the video, it is believed that at least three of the shots struck McDonald's body as he lay motionless on the ground, conflicting with police reports of the incident. Alvarez refused to resign, but on March 15, 2016, lost her re-election bid.

Alvarez was married to Dr. James Gomez until May 2021. She has four children. Alvarez resides with her family in River Forest, Illinois.