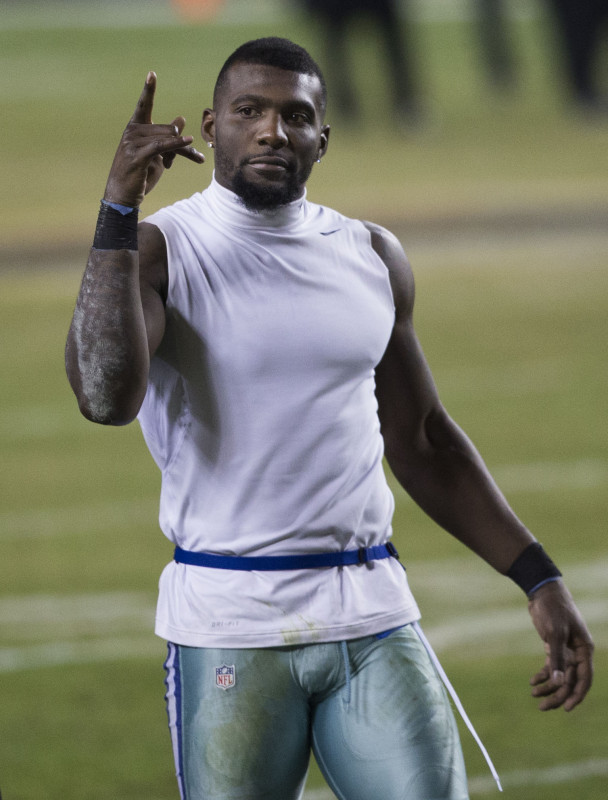 Desmond Demond Bryant (born November 4, 1988) is an American football wide receiver who is currently a free agent. He played college football at Oklahoma State, where he earned All-American honors in 2008. He was drafted by the Dallas Cowboys in the first round of the 2010 NFL Draft and has earned three Pro Bowl berths and was a First-team All-Pro player in 2014.

Bryant attended Oklahoma State University from 2007 to 2009 and was a member of the Oklahoma State Cowboys football team coached by Mike Gundy. As a freshman in 2007, he finished second on the team with 43 receptions for 622 yards and six touchdowns in 12 games. In a game against the University of Kansas Jayhawks, he set a school record for receiving yards in a game by a freshman with 155. In the 2007 Insight Bowl, he recorded nine receptions for 117 yards and two touchdowns in a 49–33 win against the Indiana Hoosiers.

Bryant was ruled ineligible for the rest of the 2009 season on October 7 for violating an NCAA bylaw. He failed to fully disclose his interaction with Deion Sanders, a former NFL player, to the NCAA. He was considered the best wide receiver in 2009 and a possible Heisman Trophy contender before the suspension. In three games, he finished with 323 receiving yards, four receiving touchdowns, and a punt return touchdown.

On November 5, 2009, Bryant announced his intentions to enter the 2010 NFL Draft. He was widely believed to be the best wide receiver available and to be targeted by the Denver Broncos, who traded their Pro Bowl receiver Brandon Marshall to the Miami Dolphins prior to the draft, with the 11th overall pick. If he slipped by the Broncos, Bryant was projected to fall no lower than the 27th pick to the Dallas Cowboys. After dropping because of character concerns, the Cowboys traded up with the New England Patriots, moving from the 27th to the 24th position to select Bryant. For the move, the team sent a third-round draft choice, which was the 90th overall pick, while receiving the Patriots' fourth-round draft choice, which was the 119th overall pick.

Bryant was signed by the Cowboys to a contract very similar to that of Vikings' wide receiver Percy Harvin (five years, $12.05 million, roughly $8.4 million guaranteed) on July 22, 2010. On July 23, 2010, it was announced that Bryant would wear the #88 jersey, the same as Hall of Famer Michael Irvin, and Cowboys legend Drew Pearson.

On September 12, Bryant made his NFL debut against the Washington Redskins and had eight receptions for 56 yards. In the next game, he had a punt return touchdown in the 27–20 loss to the Chicago Bears. On October 17, Bryant caught his first NFL touchdown catch, on a 31-yard pass from Tony Romo. The Cowboys ended up losing that game 24–21. In a Monday Night Football game against the New York Giants, at Cowboys Stadium on October 25, 2010, Bryant caught four passes for 54 yards, two of them for touchdowns, and also returned a punt 93 yards for a touchdown, making the longest Cowboys' punt return since Dennis Morgan's 98-yard return during the 1974 NFL season. On November 15, 2010, Bryant caught three passes for 104 yards and one touchdown, to become the first Cowboys rookie with a 100+ yard game since Antonio Bryant. During the fourth quarter of the Cowboys' 38–35 victory over the Indianapolis Colts, Bryant went down with a fractured ankle. Indianapolis' Kavell Conner held onto Bryant's leg while tackling him on a kickoff return, and the Cowboys immediately took Bryant to the locker room. He was placed on the injured reserve list and had surgery on the fractured ankle. He left the game with one catch for 14 yards and a 35.7-yard average on three kickoff returns.

Bryant had a troubled upbringing, born to a 15-year-old mother who was arrested for dealing crack cocaine when Bryant was eight years old. He went on to live in eight different homes while attending Lufkin High School. Bryant has two sons, Zayne and Dez Jr. Bryant was sued in March 2011 for $861,350 for legal fees and the cost of jewelry, which he acquired on credit while a student athlete. The case was settled before court proceedings for between $400,000 and $500,000.

On July 16, 2012, Bryant was arrested on a class A misdemeanor domestic violence charge for allegedly striking his biological mother, Angela Bryant. In March 2013, Bryant spoke at an event for Dallas Men Against Abuse. At the event, he stated, "I'm done with domestic abuse." On August 28, 2014, Bryant launched his official brand and apparel line, ThrowUpTheX. On June 22, 2016, Bryant was sued by Texas state senator Royce West for damaging a rented house in DeSoto, Texas. Damage to the rental house totaled over $60,000.

On March 3, 2015, the Cowboys placed the nonexclusive franchise tag, worth $12.823 million, on Bryant. On July 15, 2015, Bryant and the Cowboys reached an agreement on a five-year, $70 million contract that included $45 million of guaranteed money and a $20 million signing bonus.

During Sunday Night Football against the New York Giants on September 13, 2015, Bryant left the game with a foot injury. An x-ray revealed a fracture in the foot that required surgery. Recovery time for Bryant's injury required 4–6 weeks. He returned in Week 8 against the Seattle Seahawks and struggled, recording two receptions for 12 yards in a 13–12 loss to the Seahawks in AT&T Stadium. Week 9 against the Philadelphia Eagles, Bryant caught his first touchdown of the season on a day where he totaled five catches for 104 yards. Limited to nine games in the 2015 season, Bryant had 401 receiving yards and three touchdowns. He was ranked 51st by his fellow players on the NFL Top 100 Players of 2016. On January 6, 2016, he underwent foot and ankle surgeries.

The Cowboys released Bryant on April 13, 2018, after eight seasons with the team.