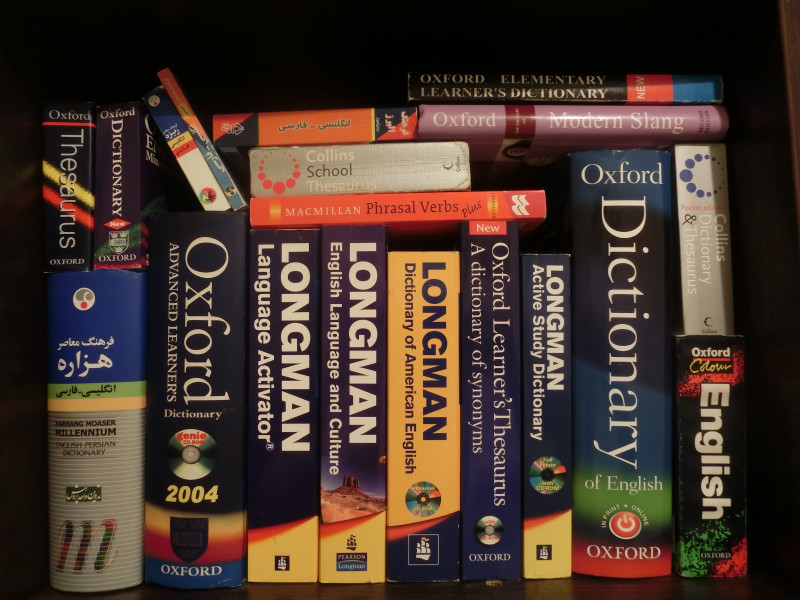 The earliest dictionaries in the English language were glossaries of French, Spanish or Latin words along with their definitions in English. The word "dictionary" was invented by an Englishman called John of Garland in 1220 — he had written a book Dictionarius to help with Latin "diction". An early non-alphabetical list of 8000 English words was the Elementarie, created by Richard Mulcaster in 1582.

In medieval Europe, glossaries with equivalents for Latin words in vernacular or simpler Latin were in use (e.g. the Leiden Glossary). The Catholicon (1287) by Johannes Balbus, a large grammatical work with an alphabetical lexicon, was widely adopted. It served as the basis for several bilingual dictionaries and was one of the earliest books (in 1460) to be printed. In 1502 Ambrogio Calepino's Dictionarium was published, originally a monolingual Latin dictionary, which over the course of the 16th century was enlarged to become a multilingual glossary. In 1532 Robert Estienne published the Thesaurus linguae latinae and in 1572 his son Henri Estienne published the Thesaurus linguae graecae, which served up to the 19th century as the basis of Greek lexicography. The first monolingual dictionary written in Europe was the Spanish, written by Sebastián Covarrubias' Tesoro de la lengua castellana o española, published in 1611 in Madrid, Spain. In 1612 the first edition of the Vocabolario degli Accademici della Crusca, for Italian, was published. It served as the model for similar works in French and English. In 1690 in Rotterdam was published, posthumously, the Dictionnaire Universel by Antoine Furetière for French. In 1694 appeared the first edition of the Dictionnaire de l'Académie française (still published, with the ninth edition not complete as of 2021 ). Between 1712 and 1721 was published the Vocabulario portughez e latino written by Raphael Bluteau. The Real Academia Española published the first edition of the Diccionario de la lengua española (still published, with a new edition about every decade) in 1780; their Diccionario de Autoridades, which included quotes taken from literary works, was published in 1726. The Totius Latinitatis lexicon by Egidio Forcellini was firstly published in 1777; it has formed the basis of all similar works that have since been published.

The first purely English alphabetical dictionary was A Table Alphabeticall, written by English schoolteacher Robert Cawdrey in 1604. The only surviving copy is found at the Bodleian Library in Oxford. This dictionary, and the many imitators which followed it, was seen as unreliable and nowhere near definitive. Philip Stanhope, 4th Earl of Chesterfield was still lamenting in 1754, 150 years after Cawdrey's publication, that it is "a sort of disgrace to our nation, that hitherto we have had no… standard of our language; our dictionaries at present being more properly what our neighbors the Dutch and the Germans call theirs, word-books, than dictionaries in the superior sense of that title."

In 1616, John Bullokar described the history of the dictionary with his "English Expositor". Glossographia by Thomas Blount, published in 1656, contains more than 10,000 words along with their etymologies or histories. Edward Phillips wrote another dictionary in 1658, entitled "The New World of English Words: Or a General Dictionary" which boldly plagiarized Blount's work, and the two criticised each other. This created more interest in the dictionaries. John Wilkins' 1668 essay on philosophical language contains a list of 11,500 words with careful distinctions, compiled by William Lloyd. Elisha Coles published his "English Dictionary" in 1676.

The first edition of A Greek-English Lexicon by Henry George Liddell and Robert Scott appeared in 1843; this work remained the basic dictionary of Greek until the end of the 20th century. And in 1858 was published the first volume of the Deutsches Wörterbuch by the Brothers Grimm; the work was completed in 1961. Between 1861 and 1874 was published the Dizionario della lingua italiana by Niccolò Tommaseo. Between 1862 and 1874 was published the six volumes of A magyar nyelv szótára (Dictionary of Hungarian Language) by Gergely Czuczor and János Fogarasi. Émile Littré published the Dictionnaire de la langue française between 1863 and 1872. In the same year 1863 appeared the first volume of the Woordenboek der Nederlandsche Taal which was completed in 1998. Also in 1863 Vladimir Ivanovich Dahl published the Explanatory Dictionary of the Living Great Russian Language. The Duden dictionary dates back to 1880, and is currently the prescriptive source for the spelling of German. The decision to start work on the Svenska Akademiens ordbok was taken in 1787.

Webster completed his dictionary during his year abroad in 1825 in Paris, France, and at the University of Cambridge. His book contained seventy thousand words, of which twelve thousand had never appeared in a published dictionary before. As a spelling reformer, Webster believed that English spelling rules were unnecessarily complex, so his dictionary introduced spellings that became American English, replacing "colour" with "color", substituting "wagon" for "waggon", and printing "center" instead of "centre". He also added American words, like "skunk" and "squash," which did not appear in British dictionaries. At the age of seventy, Webster published his dictionary in 1828; it sold 2500 copies. In 1840, the second edition was published in two volumes. Webster's dictionary was acquired by G & C Merriam Co. in 1843, after his death, and has since been published in many revised editions. Merriam-Webster was acquired by Encyclopedia Britannica in 1964.

Johnson's dictionary remained the English-language standard for over 150 years, until the Oxford University Press began writing and releasing the Oxford English Dictionary in short fascicles from 1884 onwards. It took nearly 50 years to complete this huge work, and they finally released the complete OED in twelve volumes in 1928. It remains the most comprehensive and trusted English language dictionary to this day, with revisions and updates added by a dedicated team every three months. One of the main contributors to this modern dictionary was an ex-army surgeon, William Chester Minor, a convicted murderer who was confined to an asylum for the criminally insane.

The age of the Internet brought online dictionaries to the desktop and, more recently, to the smart phone. David Skinner in 2013 noted that "Among the top ten lookups on Merriam-Webster Online at this moment are holistic, pragmatic, caveat, esoteric and bourgeois. Teaching users about words they don’t already know has been, historically, an aim of lexicography, and modern dictionaries do this well."